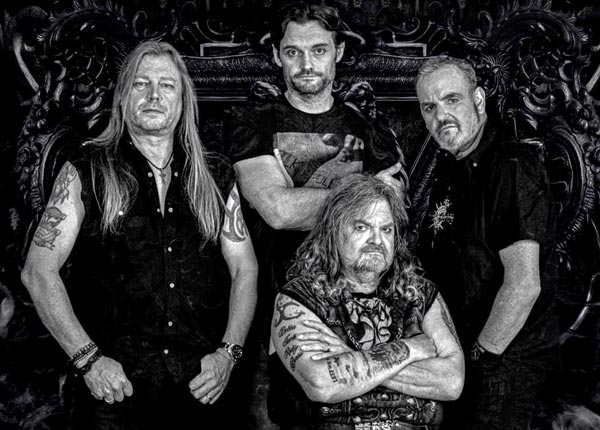 Grim Reaper was formed circa 1979 in the UK and featured Nick Bowcott and vocalist Paul de Mercado. Their fate was short lived however and after a break up was quickly reformed by Bowcott; this time with Dave Wanklin, Lee Harris and Steve Grimmett. The four meshed instantly and from there began their ascent to prominence after they bested 100 other groups in a battle of the bands competition; eventually leading them to signing a deal with Ebony Records.

"See You In Hell" was released in 1983 and distributed by RCA Records in 1984 making it a very successful first offering. "Fear No Evil" was the follow up and they were on their way to new heights. but unfortunately as is all too common in the music business; legal battles and squabbles with record labels permeate projects and Grim Reaper was no exception. The ensuing struggles delayed the release of a third album for years and subsequently was the beginning of the end as the metal genre had morphed into something with a harder edge and the old guard began to lose some of its popularity as the 80's moved towards their close leading the group to disband in 1988.

Once a musician has tasted success, or anyone for that matter, it's difficult to rest on those laurels and after partaking in other projects Grimmett reformed Grim Reaper with a totally new cast. The current line up consists of Grimmett, guitarist Ian Nash, bassist Julius Hill and drummer Mark Rumble. They've put out a new record called, "At The Gates" and are in the process of wrapping up a North American tour which recently passed through New Jersey.

"I've known Ian for a long, long time and we were in a band before we decided to get Grim Reaper together again and we've had a couple of drummers and bass players until Mark joined us and he's been with us for about four years now and recently we got a new bass player named Julius Hill and it's quite a good polished unit," explained Grimmett with a tone of satisfaction in his voice. "We get on very well so that's the long term future with these guys; unfortunately (laughs) but I do quite like them."

Life has not been a bed of roses for Grimmett and this recent release signifies triumph over tragedy for the veteran front man who had to overcome multiple obstacles to bring this release full circle. Unfortunate medical circumstances including the loss of a limb and death of a family member all hindered the process but through perseverance and determination he pushed on.

"I had gotten an infection in my foot and it was bad enough to lose my foot and then I got necrosis which is a flesh eating disease in that cut so then they cut me above the knee where I had blood flow and that's how I lost it."

"It's a 12 track record and it's basically about my time when I lost my leg. It was therapy for me really, I mean at the end of the day I had already gotten over the fact that it had happened and it was about getting on and getting out there again. I mean that was years ago now but I'm still learning to walk with a prosthetic; some days you don't feel it and some days are different, they're more difficult than others but in general I'm back up on stage and doing it."

Grimmett used his current band mates to record the album which took a bit of time to create but notes that on this tour they are using a fill-in bassist from a prior configuration of the band.

"It took about 18 months to write the album. Ian played the guitar on it and Mark our drummer was on it too but we've got a different bass player with us at the moment named Chas Grimaldi who has played and toured with us before." Grimmett elaborated, "At The Gates" is a little bit of a departure from the normal sound of Grim Reaper, it's still Grim Reaper but its got a bit of an edge. It was recorded old school, drums and guitar were done sometimes together and sometimes not but it was definitely done old school, it's good and we're pleased with it. We did it in Mark's studio and my studio, the production was done between Mark and Ian and I stayed out of it. I've had issues, well I've always had issues (laughs); due to my leg I ended up having post traumatic stress disorder and then nearly a year ago I lost my younger brother and it all just kind of mounted up and I ended up in a dark horrible place but I'm pulling out."

Despite some commercial success in their native UK, Grimmett says the pallet for their music is much stronger here in North America.

"The tour is only about a month because our visa runs out at the end of September. We come here because there's not enough interested people in the UK so that's why we come here. We are going to tour the arse out of this album and then we will be back home to start some other projects that we've got in line and we will most likely be back in the states again next year."