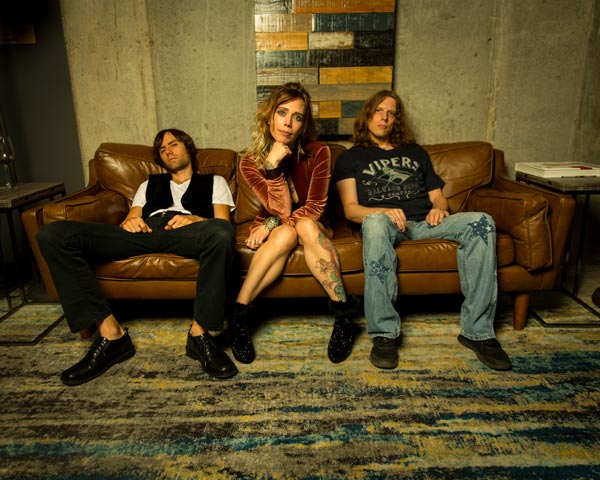 "We're coming up to the Northeast on August 24 for a show in Clifton, NJ and because we released a new CD," says Lola Montez lead vocalist Inga Rudin as she and band mate Blake Scopino discussed their new release and upcoming area shows.

Based in Nashville, TN but with roots, "From all over," Lola Montez has been together for only a short time yet has developed a top notch sound and style that is truly different from what currently permeates the airwaves and music charts of today.

"There's always an edge to our music lyrically; it's dynamic," says Scopino. "You can't be a jack hammer for 50 minutes on a CD, you have to go up and down. People say it's punk but it's not; it's raw with a progressive element to it but especially with the new album there is a lot of audio candy. There's a lot of cool sounds, there's a good mixture of sounds and styles as well. Sometimes we're hard rock that borders on the edge of what people think is metal; it can be very heavy but can also have a very nu-wave 80's British rock kind of sound. I wouldn't say that's a harder edge sound, it's a little bit more diverse than a straight hard rock record. There's some jangley things, guitar wise I pull a lot of (different) riffs that could go from heavy like a Metallica sounding riff to The Smiths in terms of jangley guitar. So it's sort of the spectrum musically, we do have some four on the floor; we've got a little bit of everything but it's a rock record."

Rudin agrees but acknowledges that their songs have been labeled by some as, "Pissed off Punk" adding,"All of our songs are so individual; some are drawn from past relationships so many times our music is described as dark, maybe a bit angry sounding. In my opinion we even have a song that's a disco jam so I think it's also dance-able."

Rudin who was from the Morristown, NJ area explains how the band came to be and took its unique name.

"I came down to Nashville because I just wanted to sing," she said with a slight laugh.

"I was in another band for a really long time and then some of the members started moving away and we kind of broke up for a while so I started searching for a guitar player. A friend of ours hooked all three of us up together but we couldn't do much until we had all the pieces in place. We've been together for about three years now and actually our relationships are really great. There's never any fighting and we're always very conscious of each other's feelings and if there are problems we talk things out. Communication is important in any relationship and usually when there are problems with bands that is the main reason why, which is why they usually break up."

"Lola Montez was a dancer in the 1800's and I came across her name and when I looked her up I discovered she was free spirited, risque, wild yet looked up to by others and I thought, this is totally cool because it describes our music and captured us; or maybe just me (laughs). Everybody agreed and liked it so we went with it and that's one of the things that's hard to do; name a band."

"Dissonant Dreams" is their latest release and is a 10 track full length disc full of  rock 'n' roll goodness; so why the title?

"Basically it's a more artistic description of the internal chaos of many people," relayed Scopino; "It was me getting poetic because I knew there was an element of dissonance that was interesting to me and I wanted to say it in a way that was a little bit more eloquent than just harmonious noise."

Scopino, who writes the majority of the band's music elaborated on their entire song producing process.

" I write a lot of the guitar riffs myself and then take those to Kurt (Pietro) our drummer and he and I basically arrange a lot of our songs and then we take it and give it to Inga and she works out her melodies and lyrics off of that."

"I've been recording as long as I've been writing which kind of helps with the production element. Sometimes when I'm writing and if I'm demoing it out on Pro-Tools at the same time there's sort of a draw from various influences. When I first got into music I listened to The Beatles for about five years so I like a good pop song. I have those pop sensibilities in my writing so that's kind of always there; so anything from The Beatles on up really tends to influence the writing. Guitar wise there's always things where I can say, oh there's a little bit of this person or a little bit of that; there's the lead guitar element too which is a whole other set of influences. What I started doing on this album is I started tuning to drop "A" which is sort of a rare tuning but it allowed me to write a lot of guitar riffs that were kind of unusual yet hooky at the same time. So it's really cool because the music can be kind of heavy yet has that pop sensibility."

August 24 sees the band roll into New Jersey for a show at Dingbatz in Clifton followed by an August 25 gig at a storied venue in New Hope, PA; a place Rudin says they enjoy.

"We'll be playing in New Hope, PA at John & Peter's on August 25; we played there last year and loved it so we're going back."

To discover more about Lola Montez, buy their merchandise or obtain tickets to the show; please visit www.lolamontezband.com.