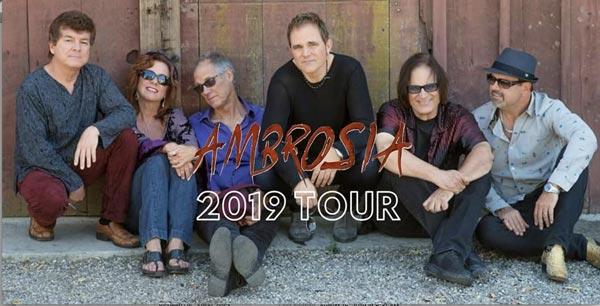 "Ambosia is playing quite a bit, we do about 60 dates a year; not as much as some but more than others. We're having a lot f fun, we do our own shows where we do the prog, the pop, the rock; we do it all and a couple of months out of the year we do "Yacht Rock" shows where we get together with all of our friends like Steven Bishop, Peter Beckett, John Ford Coley, Walter Egan and we do like a review show and we are doing a lot of that over the next month."

Drummer Burleigh Drummond was there from the beginning and along with fellow founding members bassist Joe Puerta and keyboardist Christopher North continue to keep their music fresh in the minds of multiple generations.

Ambrosia to many is a popular picnic staple or summer treat but to Drummond and his band mates there was a different reason for the moniker; one based in mythology.

"Originally, Ambrosia was the nectar of the Greek gods, the food of the Greek gods that kept them immortal. So we thought, OK then our music will be immortal; you know when you're 18 things are like that and who knows maybe it will be," he said with an almost quizzical tone. "Ambrosia became fruit salad and now it's a mixture of fruit and nuts so I don't know what I am anymore (laughs). You know it could be worse, God bless Toto but in Japan Toto is the leading manufacturer of toilet seats, Ambrosia in England is rice pudding so there you go; we're all of those things (laughs)."

Performing at festivals, the Yacht Rock shows, corporate events and weekend gigs, the band has an opportunity to reach various new age groups as well as touch their solid original fan base who have remained loyal since the beginning. Many bands or solo artists rely heavily on merchandise sales as a portion of income but with Ambrosia recordings at premium availability; what do they do placate those wanting to take a piece of their heroes home with them?

"Three of the four members are still original, so basically what we sell is a live album. Ambrosia CDs are pretty hard to find unless you're lucky enough to get a Japanese import. The live album that we did is really, really good so we sell that, tee shirts, hats, pictures; we support the Yacht Rock cause, we have a Yacht Rock tee shirt that people can buy. The thing that is neat about the Yacht Rock shows is that you're getting two hours of hits; it's a totally different demographic. The older fans come for sure but now so do a lot of 30 year olds with sailor hats on, they're a little bit inebriated but they know every lyric to every song (laughs). Most of these kids come up and they'll say, that's all my mom played when I was growing up so it's a big part of me. That's really cool to see that it had a lasting affect on them let alone enough that they like to go out and see it."

When asked if they have given any thought to making a long awaited new album; Drummond was vague at best, not wanting to tip their hand. However he did elaborate upon a project that he and his wife undertook to keep it all in the family.

"That remains to be seen; we have new songs but whether they'll be recorded or not; we all have our personal things. I have a band with my wife called Tin Drum and we're doing a new record and playing live so I can't really say that Ambrosia will be doing a new record."

"My wife Mary Harris and I have been married for 36 years and she played with Jimmy Buffett, Animal Logic and did sessions for Pink Floyd and Stanley Clarke and during our early days of being married I was touring with Jim Messina and people like that. So we had a son and we were passing him off to each other in the airport and finally we just said, we need to start playing together if we're going to spend time together as a family. So we formed Tin Drum and we've done three CDs and we've had great indie response so then Mary became involved as the keyboard player for Ambrosia so that's kind of eclipsed Tin Drum because we were working so much as Ambrosia and now we've been getting requests to play again so we're feeling like; why'd we ever stop? This is what we want to do and our son is 32; he has his own band called, The Everly Brothers Experience and they're amazing."

Songs such as, "How Much I Feel" and "Biggest Part of Me" were top five hits while "You're the Only Woman (You & I)" and "Holdin' on to Yesterday" were entrenched in the top twenty and all still receive radio airplay today. Drummond tactfully gave his opinion on why the music of today may or may not have the staying power or longevity of its predecessors.

"I don't know if I'd be critical enough to say that today's music is not worthy. I think there is a lot more formulaic writing now that maybe doesn't have the heart that the songs of my era had. I will say that one thing for sure is that the craftsmanship of the writing in the 70's was high, it was very high.You had people like Michael McDonald and Kenny Loggins and a lot of great session players writing songs that were really stellar. They were very musical with great lyrics, so I don't want to put down the music of today but I do want to say that the music of that era was at a very high level. I am still very honored and I never take it for granted that people respond to our music when we play and I'm very appreciative of that; hey, it's an honor."

"There's such a glut of music out there. I think there is some amazing stuff out there; my daughter and my son turn me on to stuff weekly that blows my mind. I can't say that it's not out there, it may not be on the radio but it is out there; it may be harder to find but I think it is there and I'd hate to see that die.Taking music out of the schools and doing the things that we've done, we're doing everything we can to kill it but I think it's going to survive. As long as people have to find a way to express themselves a certain number of them are going to do it through music and thank God for that; it's the art that transcends."

So what is in the master plan as he and the band continue to revive their past successes every time they take to a stage?

"I am the drummer and as you know it's like an endless pursuit, you're never going to be the master at it you'll always be the student. So as long as I can keep pursuing that and my writing; I'm very excited about working with my wife more in the future and with Tin Drum and Ambrosia will continue on because it's fun; it's like a reunion every time we play even though we play a lot. So life is really good to me, I've got another grand-daughter on the way so life is pretty rosy."

Drummond and the rest of Ambrosia will be performing along with the rest of the Yacht Rock crew on Tuesday August 20 at The Mayo PAC in Morristown, NJ. The "Rock The Yacht 2019 Tour" will also feature Walter Egan, John Ford Coley, Denny Laine, Peter Beckett and Elliot Laurie in a 7:30 p.m. show at this intimate facility. Tickets range from $39 - $89 and can be purchased at www.mayoarts.org.