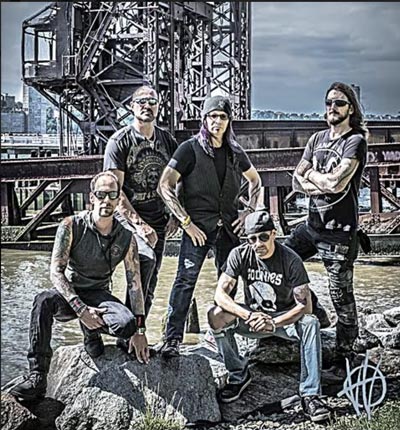 "We're in San Antonio Texas today and it's been great! The crowds have been really responsive, it's kind of really cool for us because we're the heavier band out here so we kind of stick out so it gives us the chance to go out there and set the bar pretty high; it's been a great tour."

Freddy Ordine has ridden a rock 'n' roll roller coaster before; the business sure provides its share of ups and downs, twists, turns and uncertainties but at this moment, just like the great state of Texas; the future of Weapons Of Anew is wide open.

Currently on the road supporting former Creed singer Scott Stapp on his "The Spaces Between The Shadows Tour" this group from the northern New Jersey and New York areas have scheduled stops first on July 20 at the Levoy Theatre in Millville and again on July 27 at Starland Ballroom in Sayreville.

"We're excited, we get to do a Pocono's show, the Starland, a New York City show, the Millville show, a Long Island show; so we've got four or five local shows and we're really looking forward to it," said Ordine as he elaborated on the tour, performing close to home, the band's future and more.

Still riding the success of their first release, "The Collision Of Love And Hate," Ordine explains how and why a follow up disc will have to wait.

"We were actually just getting into the studio and our plan was to start working on our new record; I think we got about two weeks of work in and our manager called and said, "Hey, do you guys want to do the Scott Stapp tour?" We were like, yeah we really want to do this and so far it's been really cool for us."

They were so early on in the recording process when the call came that most of the tracks are still being developed and most have yet to be named.

"No title for the album yet because we're still working on the songs and they're named "New One 7" or "New One 3" Ordine said with a laugh. "My computer is full of ideas and then we'll start pulling them apart and we're like, hey remember that one where we have to hum and I'm like oh shit I don't remember (laughs) and then it takes us an hour just to find the cool Idea we were working on. We have been working with Mike Ferretti who does Sevendust; we've become really good friends and he's been helping us with the production of it."

Although it is a collaborative effort, Ordine says that he is the one who introduces most of the band's material.

"Usually I'm the principal songwriter, I'll usually sit and get a basic idea and a song structure and then I'll sit with the band and try and get it to sound like us. Once we have it kind of dialed in then we'll work on the melodies and write some lyrics and that's in general how it usually works for us; it's not necessarily going to be that way all of the time but that's how it is most of the time. I write in Pro-Tools and the drums are really a pain in the ass, really kind of stiff, whereas when Chris (Drummer Manfre) is there we kind of have almost an R & B feel or what we call the "New York City Groove" which is what we all grew up with; Chris swings a little bit more than my computer does (laughs)."

So with the new record on hold and the tour in full swing; are they testing out any of the new material yet?

"We've been doing a bunch of live stuff off of the first record and we've got this one that has this crazy Latin kind of vibe to it; it's so cool because it has a different kind of energy and a different kind of beat to it. I've been enjoying playing it; probably too much (laughs). We have been doing this one new song that has popped up on this tour but we'll probably be breaking it out more as we're closer to home like with the New York, New Jersey and Massachusetts dates."

When life comes at you fast, you have to make adjustments on the fly. The tour came up so quickly that there was little time for preparation in way of today's financial lifeblood; merchandise sales.

"Yeah, at the beginning of the tour, merch and CD sales were a little weak because it came about so quick that we really hadn't prepared for it but over the last week or so it has really picked up as we're beginning to catch up."

Playing the guitar has always been paramount in Ordine's plans, so much so that he made a go of it while in his teens; much to the chagrin of his parents.

"I dropped out of school at 16 and started touring with one of my old bands," he started. You see, my family had a heating and air conditioning business so the rule was that I could tour from April thru October but from October on I had to learn a trade and had to go to work every day; I was pretty lucky that way. I remember when I dropped out of school my mother said, "You're father is going to kill you" and she started crying and when my dad got home from work he grabbed me by the throat and said, "You have two options, go to work tomorrow or stop breathing right now (laughs)" and I said; what time do we leave?"

Being on the road then and now are stark contrasts, especially when it comes to family. When asked if he misses home while being on the road for an extended period; his reply evoked the closeness of he and his band mates.

"In a way yeah and in a way no; I mean I've got my kids, my girl, my dog and my cat at home and I miss that stuff but we're all so close it's kind of like being a family out here; you don't really get lonely."

So what can we expect from Weapons Of Anew on stage and going forward?

"We're going to try finish recording our next album, probably headline select shows in New Jersey and New York or some one off gigs so we can keep ourselves fresh and in shape. When we hit the stage it's a full on assault, we're like rabid animals, it's crazy but we don't know any other way. I'm really excited to be doing these gigs near home it's going to be fun."

To discover more about Weapons Of Anew, the tour and purchasing tickets, please visit www.weaponsofanewband.com .