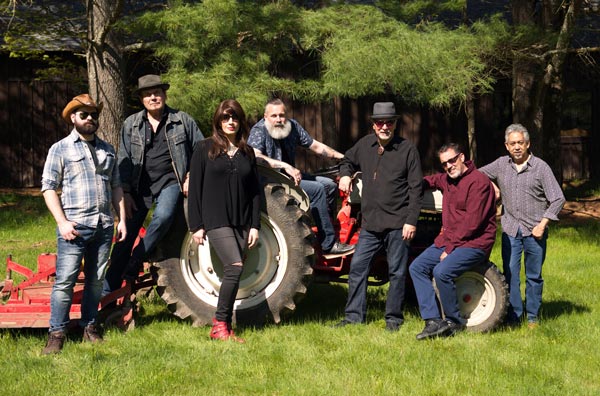 "We're a full blown band but it's a singles environment again and we released two of them in the last year; so we do two or three single releases a year. We have an agency in Los Angeles that handles our music in terms of publishing, so it's a serious effort all the way around," says American Nomads lyricist Richard Humann as he discussed the band, their writing process and more.

Calling Brooklyn, NY their base of operations, they are comprised of Walter Kenul on keyboards and lead vocals, Dante DeLemos on guitar/lead vocals, Susan Darmiento on lead and backing vocals, Joseph Humann on harmonica and percussion, George LaGrange on guitar/backing vocals, drummer Joe Carnoscenti, Jay Rivera is on bass/backing vocals and Gerald Menke on pedal steel guitar. Together they have blended what Humann calls an, "Americana Roots" sound that is nicely crafted, crisp and well packaged.

Assembling a group of nine people, particularly nine artists can be a daunting task but Humann says that they have evolved into a finely tuned machine for multiple reasons.

"We've been together in one iteration or another for the past six or seven years and full iteration as American Nomads as we go onto our third album for about five years . We're a Brooklyn based band, an American roots band and for me, I'm the band lyricist; I'm also an artist by trade so I have a foot in two worlds."

"The good news is, the band is all a bunch of professionals so there's no hand holding or babysitting on anybody's part. I write the lyrics, then I throw out a bunch of ideas and then one of the band members will pick it up and run with it. So it's kind of like a Beatle-esque situation where you have two primary writers and then maybe a third or fourth will once and a while pick something up; for me it's easy, for the rest of the band it can be difficult. I have books of poetry, my wife is in the band, my brother and nephew are in the band and the three of us live in a fire house in Brooklyn which is owned by one of our lead singers, so we're like one big family."

According to Humann, the ensemble is comprised of tireless songwriters who do not know the meaning of the word stop. These efforts have resulted in their latest album, "Ghost Highway" as well as a single which is an homage to the music festival that started it all.

"The way we do it is, we put together a bunch of individual songs. Right now we're probably on our tenth new song and at some point we'll say, hey let's make this into an album and that's how it tends to work (laughs). I mean the band is prolific, we are constantly writing new material so there's no sitting down. Since this last album was released we've probably got around 14 new songs of which 10 are album ready; some are knock offs that may never reach completion. We have a song called, "Beautiful Lady" which is basically about immigration. We're not really a politically motivated band per se but in the bigger picture it's about America; "Beautiful Lady" is about the Statue of Liberty. We have a couple of other new songs out, one of them is called, "1969" which is a tribute song for the upcoming 50th anniversary of the "Woodstock Festival" which has gotten and is still getting radio play."

Recently, they have graced the stage of The Cutting Room in NYC; their next two gigs are August 17 at the Hope Rock Music Festival in Saugerties, NY and then on to Woodstock for a September 7 show at The Bearsville Theater.

To find out more about American Nomads, please visit www.americannomadsband.com .