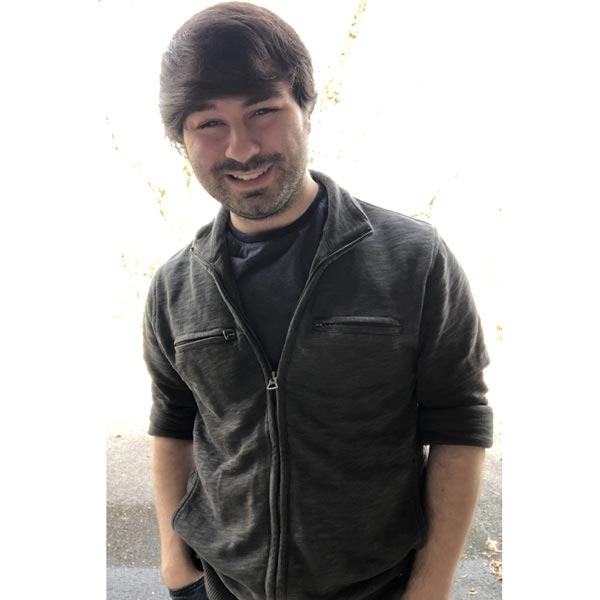 "A big thing for me with this album on top of putting out number two and the special guests who are on it; it is actually going to be on vinyl. I kid you not, I wrote out my bucket list and having my original music on vinyl is on there. So, soon I'll get to check that off and that's very, very big; I'm very excited about it," stated Johnathan Pushkar as he gets set to release his second album on June 4; an album which features special guests, a new single and one that has him positively over the moon with enthusiasm.

" I do have a new album and it's called, "Compositions," he began, "It's my second album actually; number two. My first album, "Straighten Up"  came out in September of 2019 and it was really exciting because the lead single from that was called "The Girl Next Door" and it got placed on Sirius XM in pretty great rotation for a while; Rodney Bingenheimer played it and that's how Marty Scott of JEM Records found me and he signed me within 48 hours of the song hitting Sirius XM. So, things really happened quickly, I went from independently releasing my record to being on legendary JEM Records in 48 hours which was amazing for me at the time being that I was only twenty-three. Marty said, "Hey, we're going to want to do more albums," that's how the contract was put out but he didn't necessarily say how soon or when they had to come out but he also said, "You don't want to drag your feet either" and I'm a very creatively minded person in all things that I do and I didn't want to say, I'll do another one in three or four years; the plan was to do it a year to the date later but needless to say it has been about 18 months since it has been all said and done but it is still really exciting. Then of course, the pandemic happened and locked us all down; I was supposed to go in and record the album in late March of 2020 and needless to say that wasn't going to happen. So, my producer Wyatt Funderburk is the producer and writer with Kurt Baker and The Connection; lots of great Little Steven comrades of mine. We did it at his house which is about 10 minutes from me which is awesome and we wanted to wait until we both felt safe being in a room together and we ended up starting it about a year ago and worked all through the summer on it and it was tough because I wasn't necessarily sure that I wanted to do it during COVID. My biggest fear with the album was that 10 or 15 years from now I didn't want to look back and say, oh, that was the 2020 album; the one where we were all locked up and depressed and kept apart. The music, I feel has a very uplifting undertone to pretty much all of the songs; even the ones that are a little more dire in consequence have an uplift at the end of the chorus or the moral of the story if you will. So, looking at it in retrospect now, it's actually very cathartic for me. Instead of being fearful of looking at it and saying, it's the 2020 album, now I look at it and I'm proud to say it's the 2020 album. I grew through the pandemic and I hope most people did through professional growth or personal growth; I'm very proud of how I came out of it and it is ironic that I went into the album fearful that it would be representative of 2020 and now I wouldn't have it any other way."

Releasing a debut album and then six months later having all live shows and many avenues of promotion closed off is not exactly what one would call an ideal situation but he was buoyed by the shutdown due to COVID-19 and where many artists would have been frustrated; Pushkar went right back to work and he not only found new material but the new album title as well.

"I started writing this album the day my first one came out because like I said, I really wanted to challenge myself to get the next one done and with that comes a whole new blank slate. I found myself looking at a bunch of empty pages that would eventually turn into songs but I love the idea that every song on this album was brand new and fresh and then of course the play on words with musical composition and that just kind of lended itself to the Composition Notebook with it. This was a lot of fun and I love the way the design came out and the blue notebook; blue is my favorite color."

Johnathan stops short of calling his music "Pop" instead, he shies away from categorizing himself; his influences however, speak volumes.

"I grew up just south of Pittsburgh, Pennsylvania in the Greensburg/North Huntingdon area and our claim to fame was that in the early 60's, Tommy James' "Hanky Panky" was popularized by a local DJ in my hometown and it's my understanding that some of The Shondells were actually from my hometown; well, at least the iteration that we know of and so, of course I'm a big Tommy James fan; it's like being from New York or New Jersey and not being a Springsteen fan, it's unheard of (laughs)."

"My dad would drive me to school in the mornings listening to one album; "The Beatles Greatest Hits" and I'd always say that it was like The Beatles getting injected directly into my veins everyday as a little kid; exposure therapy. I grew up loving The Beatles and when I was a teenager my friends and I started a Beatles tribute band; I think we were all about 13 at the time and I was Ringo and that was something fun and different. I was singing too and doing a little more than just the Ringo stuff and playing drums back in those days and as we grew up and we did that for about six or seven years; my interests kind of went backward. While the other guys kind of got into more modern stuff, I was looking back and saying, man this Bill Haley stuff is great and this Buddy Holly stuff is great, Eddie Cochran, Carl Perkins; I actually dialed back a bit while my band mates at the time were getting into Top 40 and Punk. That stuff is great too, don't get me wrong but I've just always been kind of stuck in that mid to late 50's and 60's kind of sound; I've always loved that kind of pop music."

"Compositions" has 11 tracks, 10 original songs and one remake of a classic Wings song. He didn't cut corners when it came to the session players on this disc; going as far as recruiting the man who laid down the drums for the original recording.

"Junior's Farm" is just one of my all-time favorite McCartney and Wings tunes. I just have always loved it, it has got so much drive behind it; I think a lot of people look at McCartney and don't necessarily think of him as a power-pop guy but I really feel that "Junior's Farm" kind of embodies that kind of sound and that's what I wanted to capture. It all came together in 2019 here in Nashville when Geoff Britton came back to visit and Geoff was the drummer for McCartney and Wings when they came here in 1974 and recorded that song. So, when he came here in 2019, I got to spend several days with him and we became friends and got to spend some really quality time together and that was before my first album came out. I gave him a promotional copy of my first album and he said, "Oh my gosh! I love this! The only thing I don't like about it is that I didn't get to play on it" and I said, well, there's another one in the works and the invitation is open. He was excited; he was supposed to come back in the summer of 2020 and we were going to record it then and once again, all roads lead to the lockdown. So, I don't have to explain why it didn't happen but thanks to technology he was able to record the tracks from where he was and send them back. So, it ended up working out and it was a lot of fun and we're already making plans to do some recording the next time he comes back; hopefully sooner than later. He is on "Junior's Farm" and three of my original tracks which is dynamite."

Pushkar is a drummer by trade who has also mastered the guitar but he had no problem sharing the drum work with Britton and another seasoned player.

"I play drums on about half of the album; the very first track, "Any Second Now" has Sandy Gennaro; he played with Cyndi Lauper, Joan Jett, The Monkees and so many of my pop music favorites and then Geoff played on the others; so, I played drums on about half the album once all was said and done. I picked everybody who played on the album except Mandy Funderburk who is Wyatt's wife and a school music teacher here in Nashville and she played the strings on the last song, "No One Ever Said You Had To Stay" and Matt Thompson played the kind of Carl Perkins guitar part on "Just Friends" He plays in a band with Wyatt called "Sail On" a Beach Boys tribute band; it was really cool to bring in all of my buds on this. Kris Rogers also plays keys on "Alexandra" and he is an artist on Little Steven's label."

Jonathan says, "The album has been in pre-order since April 26" and is available at retailers, "Target, Amazon, Barnes & Noble, Apple and, Spotify" but does say that with such an uncertain climate still enveloping music venues; live performances are still a work in progress.

"It definitely is a bummer, we did get to do an album release show for the first album and it was really great. The band was so tight and so great and we just started rehearsing again to grease the gears again to get going but living here in Nashville, for better or worse it is pretty progressive with re-opening and staying open. I can go out and do anything as long as I have a mask and it is a whole separate conversation as to whether that is good or bad but as far as shows; June is here and I'm pretty optimistic that we will be able to do something even if it is limited capacity. We'll do something to celebrate it, my band is on board, a lot of my fans and friends locally are on board. We are going to do something fun but it is still kind of  in development as to what we can do."