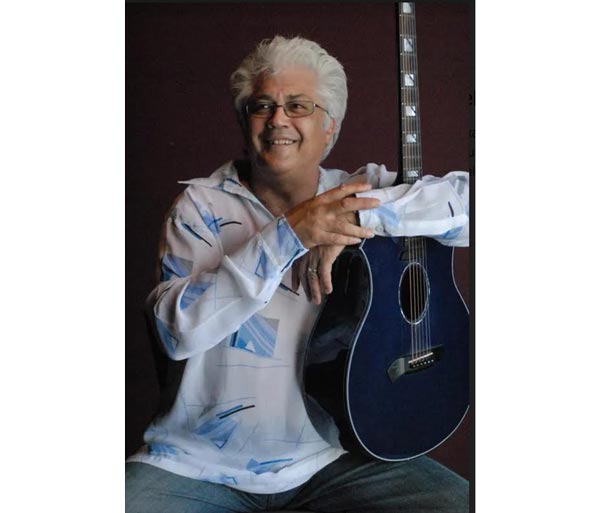 The unexpected passing of guitar great Larry Coryell caught the jazz world off-guard leaving many in shock and disbelief. Widely considered to be one of the most innovative and greatest players of all-time, Coryell is often credited as one of the founding fathers of the jazz fusion genre and as the saying goes; "Often imitated and never duplicated."

Fortunately for those who appreciated the raw spontaneous talent that defined Larry Coryell there was one last studio album; one he had completed prior to his untimely passing. "Larry's Last Swing with Ireland" has a scheduled release date of April 30 on Angel Air Records and recently his widow Tracey opened up on her struggles with Larry's passing, the decision as to how and why the release came about and her own career as a singer and songwriter.

"Well," she started slowly, "John Lappen has a lot of connections other than doing publicity work and there was a label and they were looking for music to unearth and distribute and this was one of the ones that he pitched and they were interested in Larry releasing and we struck a deal. I have a lot more material that was unreleased by Larry; I wanted it to be out and about because I know that's what Larry would have wanted and it just shouldn't be sitting on a shelf anymore, it was time to get it all out and circulating."

Just like, "Nobody puts Baby in a corner;" nobody should have the works of Larry Coryell on a shelf but healing from loss takes time and Tracey was no exception.

"These are projects that Larry did on his own; they just never got off the ground. They were independent from a studio thing that he did with two musicians in Ireland and this studio album was actually the last studio project he did and there wasn't enough time left for him on the planet to see it through and do something with it. We were going to look for a label or do a self-release but I'm sure that a label would've picked it up; that was the plan so I just continued with it but it took me a while to get my life and my mind straight and to feel out whether or not that I wanted to stay on board and handle running all of Larry's business that was still there. I decided that I wanted to do it, there are no emotions that get in the way anymore; it has been four years since he left. We just passed four years on February 19, so it has been a long time; so yeah."

"All we had were the tracks," she continued to explain, "None of the artwork or anything else was done but let me backtrack; when Larry passed it was such a shock and I'm not making this up but I kind of forgot so much of what had happened that last couple of years. I was his business manager throughout our relationship and it was like everything had vanished from my head. I couldn't remember the last gigs that he had done or the business of it; I couldn't remember anything and my life became so unorganized because of all the movement from it all. So, what happened was, later that year around the end of 2017 the drummer approached me and said, "Tracy; how are you doing? I want you to know that we have the tracks safe and sound" and I said; what are you talking about? I couldn't remember and I should've because I was there; it was such a traumatic thing that happened and I just kind of didn't know and then I was like, yeah, that's right! So, I kept them and then four years later there was this opportunity to get them out and so I was like, oh yeah this has to happen because for  two years everything was a blur and I couldn't even remember the important things and then it all came back to me. I started to converse again with the two men that Larry had worked with and they said, "Let us master this with Ivan," the engineer who had captured everything at Hellfire Studios; he wanted to do some more mixing and mastering because that was their expertise. So, I said, alright that's fine and they did all of that and we supplied the label with the finished masters and they wanted to do the artwork. I always asked for final approval on the artwork because I've seen some disastrous CD covers for Larry; including one that misspelled his last name (laughs). I remembered to always ask to go over it and they were nice enough to agree to that. So, we were looking over photographs and for a photographer; I wanted to use somebody from Ireland because Larry and I had gone to Ireland five times from 2015 until the time that he had passed; we were on this Ireland kick. So, I wanted to use pictures that had come from one of those visits and they did. One of the photographers came through and she just recently provided us with the photos and she had to do a lot of digging for them. The label uses their own graphic artists and we had to go back and forth with designs until we found the right one and I just approved the final artwork for the cover."

Proving that time heals or at the very least soothes all wounds, she has bounced back from adversity and embraced the Celtic connection; even going as far as having an original release date scheduled for March 17 of this year along with some more appropriate photos.

"The album is due out the end of April, it's being pre-sold right now. We moved it; it was going be released on St. Patrick's Day but it just wasn't coming together quick enough to get it out; so we pushed it to the end of April. We were trying to stick with the Irish theme but it didn't work out. The photos are from inside a club but there were pictures taken of Larry in Belfast and that's where most of these photos came from. There are a couple of photos taken in other places but the main photographs are from the other shoot."

Over the years, Tracey continued to develop her own talents and music career and she willingly shared them with her husband who had a way of coaxing them out of her and in return, she provided Larry with a trusted opinion when asked and the freedom to do what he did best; perform.

"I am a singer-songwriter and performer and I would go on tour with Larry. I don't do jazz, I do a bit of pop, rock, soul and country but he wanted me to go on tour with him and we would do stuff together all of the time. I'd be sitting in the crowd and he'd say, "I want my wife to come up on stage" and most of the time I didn't know that I was going to be singing with him because he was a master improviser with absolutely everything; not just with music but with everything in his life in general and it used to throw me because I wasn't used to that kind of spontaneity and Larry's adventurous spontaneity was something that I adored but when it came at me like that it would throw me off but I loved it. That would open me up; any kind of inhibitions that I had, he stripped them and he was a fantastic partner for me. I sung on stage with him all over the world with all of his bands and it was a fantastic experience, it was irreplaceable. So, as far as being his confidant, yeah it was in that kind of intimate way as to what he relied on me for; what do you think about that chord? What do you think of that note? What do you think of this or that person? Do you think they are shady? So, it was in that kind of intimate way as to what he relied on me for; kind of what a jazz wife would do (laughs). Victor Bailey loved me and Larry together and he used to say, "You guys are the cutest couple, Larry loves you to pieces" and he saw that about us and how I was becoming a jazz wife because we weren't married at the time and the other guys would chime in, "Yeah, you're on your way to becoming a jazz wife," like that was a dirty word (laughs) and I knew because most jazz wives have to play good cop bad cop like a manager would. You had to look out for your husband because a lot of these old jazz guys just want to play music and not be worried about who is screwing them over or who is pulling the wool over their eyes because that happened a lot."

"Larry's Last Swing with Ireland" is a six song collection of jazz standards and more, re-worked and re-issued as only the "Godfather" of jazz fusion was capable. According to Tracey, its availability will be everywhere; "Amazon is going to have it, it's being released in the US as well, with physical copies and digital downloads."

To find out more about Larry and/or Tracey Coryell, the new album and its availability; please visit www.Larrycoryell.net.