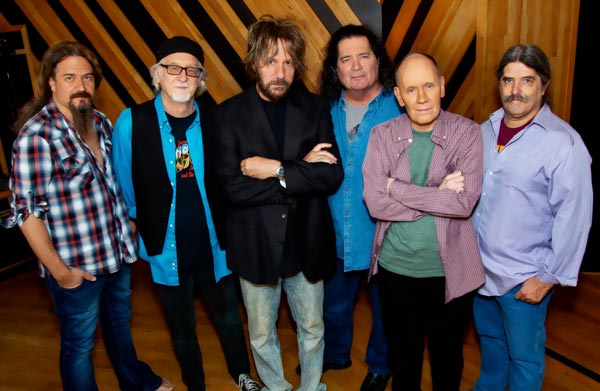 "We just finished another record and we'd love to be out playing but that's not going to happen because everything is closed down. So, the record company is trying to promote the record which just shipped out on the fifteenth of January and they're doing the best they can and the publicists and all that to promote it. So, that's that; I know that's kind of dull but there is nothing going on because of COVID. We are lucky enough to have a label that's active, Carry On but yeah, most people are making music and then it's; what do I do with it now?"

Since their self-titled 1975 debut, Crack The Sky has never asked that question and according to lead vocalist/guitarist John Palumbo; they have no intention on starting now as is evident by the release of their eighteenth studio album, "Tribes."

"Tribes" is a 13-track effort that continues to reinforce the band's reputation as one of the strongest progressive rock units ever assembled and one which still features the majority of its original line-up.

The first record we put out was in 1975, so we've been together a long time; of course we were all 12 years old when we did that,"  he said with a laugh. "We're still alive and kicking, we're still making music, we won't stop; we are stubborn and we won't quit. Right now we still have four original members but people come and go in and out; we have a new bass player and new keyboard player. I say "New" but they've been with the band on and off for 30 years so we might as well count them as original members."

Like most in today's COVID climate, Crack The Sky has been slowed but as stated not stopped. Fortunately or unfortunately, depending one's perspective; they  began the recording process just prior to  the big shutdown. So; what have they been doing since the pandemic slowed world progress?

"Lots of interviews and trying to get press and honestly; that's it," Palumbo said with mild frustration. "Normally you finish up the album and go out on the road. So, everybody is kind of scratching their heads thinking; what can we do to get this thing rolling?  We started the album about a year ago and once you start you don't stop. We just kept going; there's a process obviously and we kept just pushing forward not knowing like everybody else what the hell is going to happen and here we are."

"I'm lucky enough to be the writer and I try to write every day; that doesn't mean that I get a song out every day but I try to keep writing, otherwise; what do you do? Stare at your feet? This is what I do, so I just keep doing it to maintain some kind of normalcy; I think our last gig was sometime in February."

Today's technology allows for bands to be in the same room even when the distance is great. Tools such as e-mail, Zoom and other software products have made tracking new music far easier than in the past. There is no scheduling of studio time or worries of travel to get all of the players together; with the click of a computer key the world and the music are at one's fingertips. Palumbo explained the process he and the band have used; given they are somewhat scattered about.

"I used to be in Baltimore but I've lived here in South Jersey for about 25 years now. We are spread out all over the place; a couple of people in Baltimore, a couple of people in Columbia, Joey is in Gettysburg, Rick is in West Virginia; so we are kind of spread out. Four of us have a studio; I'll write a song and put it together based on what I think musically in a demo with the harmonies and all of that stuff and I'll then send it to Rick's studio and there two or three of the guys will go live depending on scheduling and put their own twist on it depending on what I've sent. So, it really is a band situation; it's bizarre (laughs)."

With titles such as, "Another Civil War" and "Another Beautiful day," as well as the title cut; "Tribes" has won high praise from a both their fan base and critics alike, in part because it runs the gamut of emotions and musical stylings. Considering their longevity, an ever changing world and other variables that arise in the creative process; does Palumbo find writing music different today than when the band first formed?

"Well, there's no real discernable difference that I can put my finger on but I know for myself that I try to keep pushing ahead, moving forward and doing different things. So, it's not so much the environment as it is my own kind of low threshold of boredom and I really push hard to come up with fresh stuff and the rest of the band is of the same mindset. Right now I'm writing for an acoustic album that we've been talking about doing and I'm about five tracks deep into that and I have a solo album that's next to come out depending on the schedule of the record company and then ideally the acoustic one. So, yeah we will keep going."

Crack The Sky currently consists of Palumbo, guitarists Rick Witkowski and Bobby Hird, bassist Dave DeMarco and keyboardist Glenn Workman and as soon as they get the all clear they intend on going full tilt doing what they do best; writing, recording and performing but until then, Paumbo says that the best place to obtain their music is, "The website www.crackthesky.com and from our record company Carry On Music and it's on all of the outlets; you can pretty much find it anywhere.