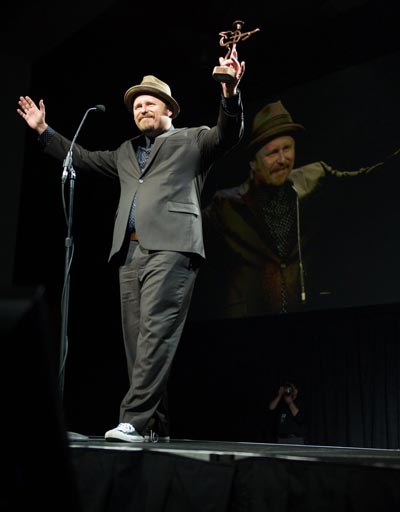 "I really don't have a whole lot to complain about, the bills are paid and so is the rent," says an always jovial John Nemeth."I'm very excited that my new record released and I've been signing records all day, everyday and getting them out to the post office; so things are grand and I'm lovin' it!"

Growing up in Idaho, one wouldn't think that blues, soul and R & B music was prevelent; neither did Nemeth. He, like many others his age were drawn to harder rock and hip-hop but one album and one experience changed his direction.

"Hoodoo Man Blues" is one of my all-time favorite records," he said as if it was still as new today as it was back then."That was one of the very first four piece blues band records that was all cut live on the floor; it was a complete record. I heard that in high school and man, that really got a hold of me. A big part of this album; you'll really hear the Junior Wells influence because I've done every song off of Junior Wells records in my live performances as a kid. There's a lot of that really cool haunting kind of blues harmonica stuff on the record; I love the way it turned out."

"The record" as he said, is now out and comes after his last effort, "Feelin' Freaky" which was released in 2017. Nemeth is very excited about this one which he says is a, "Scaled down" work.

"We have 12 tracks and the record is called, "Stronger Than Strong;" I keep'em coming. There's just so much to write about and my creative juices are always flowin.' I'm always thinking of writing a song, always thinking of a chord progression to go with one so, the wheels just never stop turning and I think it's a great combination that you've all come to expect. I think this one; some of my albums lean a little more on R & B and soul but I think this one leans a little more on the blues. Also, on this record there is a scaled down band; in the past I've used big horn sections and strings, bells and whistles when I want to on certain songs but this album has a power trio backing me up. These young cats, man they are hot and in tune with what's going on and the sound is hip. They are all in their 20's; the guitar player is only 19 years old and he is a phenom, he is a prodigy. He is the next big Eric Clapton, Jimmy Vaughn coming up through the ranks and all of these guys knew my music. Before I forget to mention, the guitar player, his name is Jon Hay and he was born in Cherry Hill, South Jersey; what a player, he's just incredible. These guys had seen me perform many times and some of them even sat in with me near the cities that they live in and then one by one they all hit me up for a job. They came at me and said, hey man if you're looking for a guitar player or if you're looking for a drummer or a bass player give me a shout. I was familiar with their playing and they all hit me up at the right time and shoot, they all moved to Memphis to cut records and tour with me."

Given the current situation and limitations (or perhaps restrictions is a better choice of words) on tours and gatherings; how does an artist such as Nemeth who especially enjoys being on the road plan on promoting the new album? Actually; why did he choose now to release it?

"I didn't want to wait any longer; I cut the album in December of last year and was set to release it in the spring time but then COVID hit and the record pressing plants and CD manufacturers were shut down. I had it mastered and that wasn't a big deal because most of those guys work alone but any of those big factories and outlets that make all of these records were shut down so I had to wait and then they pushed everything back. So, all of a sudden it wasn't just weeks or a month before you could get your vinyl and stuff; it was months to get it back. This pushed the record back to October and everyone was telling me, hey just wait, don't put your record out now; you can't tour behind it, but hey man, I make records for now and for my fans to listen to them and I think right now that the fans need something fresh. So, I decided to put the record out and that's what I'm doing; the fans are jumping on it and I'm just as happy as I can be."

Nemeth says that, "The pre-sales have been fantastic," and that the album comes in various ways; something he enjoys.

"Limited edition gold vinyl, it's 140-gram vinyl but with gold it's 141-gram gold vinyl; there is a gram of gold in every record," he said with a large laugh." It was available and I said, OK cool, I'll do that; they had silver too and that looked really good and they had platinum, green, red and all these different colors. I think it would be great to have a gold record these days; since streaming is so popular not as many people buy records like they used to but that's where it's at man. Sittin' down and listening to a record; since this whole COVID thing has gone down I've  probably listened to over a thousand records since March. One time, this great record collector named Paul lent me his record collection; I had like 20,000 records in my house besides my stuff (laughs). That made it so hard to get out of town to go on tour because I'd just sit around my house and listen to my records all day and I kind of miss that. I have to listen to my records with headphones or after the kids go to bed because we have virtual school going on (laughs). When I moved to San Francisco I gave them back to him because I was moving to an apartment and I couldn't store all that stuff and still have a wife so I brought it back to his house and he said, "Oh no;" I don't think he wanted them back (laughs)."

"Stronger Than Strong" includes two covers among the 12 tracks and Nemeth is not shy about discussing several of his favorite selections.

"Bars," is probably some of my best songwriting ever and then there is "Guess Who." That's a Jesse Belvin tune, I performed that song for B.B. King's funeral show here in Memphis. Oh my God was that ever an experience; I mean B.B King here in Memphis, wow. I fell in love with that song after doing it so I had to do my own rendition because I have to do things my own way. I completely reworked the whole song, it's amazing and there is killer guitar work on it too; what an ode to B.B. King that John Hay played on that track. I wrote all but two songs on the album and I love listening to it; it's cut all analog too. We cut it to a tape machine, it's six tracks and it's amazing. The engineer is a big-time cat; Grammy and Emmy Award winning cat named Scott Bomar. There was a review that was just put out of the record and it said, "Stronger Than Strong" is a record for everyone."

Nemeth truly has something for everyone, his music is always"Stronger Than Strong" and given his list of awards and nominations accompanied by multiple stops on various blues and Billboard Charts; whether he is"Scaled down"or full boar he is a force to reckon with.