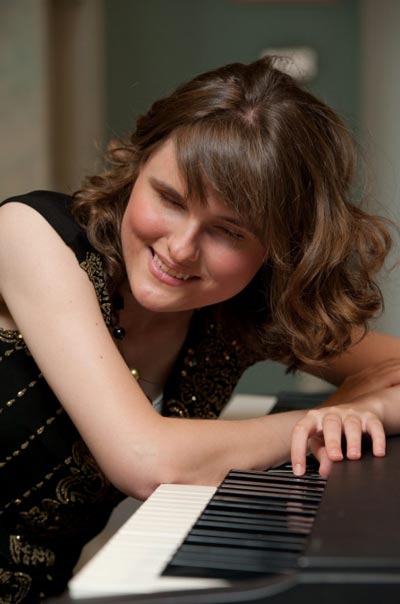 "A friend of my mom and dad's was playing "The Only Thing Is Love" and "Trilogy" on a stereo at their house and I wasn't much of a rocker at the time, I was probably about nine and I had been playing classical music like Bach but he was  playing"Trilogy" and it got to the synthesizer part and I wondered; what is that sound? Then one day my mom gave me a compilation of ELP tracks and that was the start," says musical virtuoso Rachel Flowers as she recounted how she became enamored with progressive rock music at an early age.

Rachel and a slew of other "Prog-rock" enthusiasts and performers will converge on Rahway, NJ at The Union County PAC for "Progstock 2019" on October 11, 12 and 13 where she will be participating on all three days as she joins various artists.

The term that best describes Flowers is "Hot Commodity" as her talents are highly sought after and she has a string of past appearances at Progstock festivals; "This is  my third, I was at the very first concert of the very first Progstock," she said excitedly.

A multi-instrumentalist, Flowers has overcome adversity in her life. What to others may seem like the equivalent of moving mountains, to Rachel was passion. You see, Flowers has been blind since she was an infant yet took to the family piano so easily that by the age of four she enrolled in the Southern California Conservatory of Music.

"Piano was my first instrument, then flute when I was about 10 and then guitar," she said almost sheepishly as she was preparing for a violin lesson; adding yet another instrument to her arsenal. Progstock will find her playing mostly piano and she's also scheduled to join fellow prog-rockers Brand X, Saga's Michael Sadler and 3.2 guitarist Robert Berry during their performances as well.

"Each set is completely different; they are short sets with three different acts. I'll be playing stuff from my first couple of albums and my original material will be sit down versions on an incredible grand piano; I'm very excited."

Flowers is excited and so is Robert Berry; not only to headline at what he deems the Mecca of progressive rock festivals but to admire the talents of Flowers as well.

"It's interesting, the last time I saw Keith Emerson alive was at the NAMM music show in Los Angeles and I met Tom Palmieri at the same time and he was talking about doing some things and suddenly he got this rock festival going and every year he gets bigger and better acts. Some of these acts I've never heard of but I'm very excited to see; he got his finger on the pulse of it so quickly. Some people just have a knack for things; he has a love for this, he has a yearning and a passion to make this good and I'm kind of surprised at how quick he built this; of course for me, what the "3.2" album has done was, I guess its made me worthy of the opening night. Although I've done things with a lot of famous people, this is such an honor and Tom asked me to make it happen and to me Progstock is the top of the mountain so it's really special. I'm performing with Michael Sadler and something a bit special with Rachel Flowers which is the first time we will be doing that. I'm not sure how to put it, I'm just so honored because of the responses we are getting on this tour; it's just hard for me to express it all."

"I knew Rachel as this incredible keyboard player and even saw her at NAMM and people watching were saying, wow who is she and the next time I saw her she was playing guitar, flute; it seems like anything she wants to play she does. It just seems like she's capable of doing anything she wants musically which is a wonderful thing."

Those in attendance on Friday evening will have the chance to be part of something very special.

"We're going to do a recording for a live album and a video; by Progstock we'll be 10 shows into the tour and we should be really smokin' (laughs). Over my 30 years in progressive rock; I started with Steve Howe in GTR and then "3" with Emerson and Carl Palmer, a couple of years in Ambrosia, quite a few solo albums and now with 3.2;  so we'll be playing things from my Magna Carta tribute album days which progressive fans like because it's material that they all know. I can't wait to do this and I'm just honored and very excited."

Another Progstock veteran is Saga front man Michael Sadler, who like Berry will be doing his solo and Saga material as well as a few tunes with Flowers. Sadler says when he was initially asked to be part of the festival line up he was a bit unsure of how to handle it as a solo act but things in this business can change quickly and as luck would have it, so they did.

"I was invited to do Progstock on my own last year because we couldn't get the band together which was kind of strange because I wasn't sure what I could do solo. I knew Jimmy Keegan so I contacted him and he made a few calls and things progressed from there. I was put in touch with Ed Platt and he put a set together with members of the band Enchant and they became my surrogate Saga. Then I enhanced it with Rachel Flowers and I also brought my son out to do a little acoustic number that he wrote when he was 10 and it brought the house down; he got more applause than me which he reminds me about every single day (laughs). I had went to the side of the stage and told him if he didn't feel comfortable with doing it he didn't have to do so and he looked at me and said, "I've got this dad" and he proceeded to own the room."

Once there, Sadler slipped right into a comfort zone which he claims is due to the vibe that is present at the event and then of course there was Flowers.

"I was there for the whole weekend, I did a little emceeing, I sat in with Tom Brislin; Progstock is really cool, it's not like the other festivals where there's just a bunch of bands getting together, there's a real sense of cooperative where everybody likes everybody and people sit in with each other. It's like one big happy family and its great; I was introduced to a bunch of talent I had never heard before and it's just a really cool experience."

"I had heard all about Rachel and everyone was raving about her, who she was and what she was all about so I thought it might be kind of cool to do a few songs with her. I was put in touch with her so I suggested we do "Nights In White Satin," because I thought it'd be fun, a Saga tune and one of my own. She sent me back her piano version of "Nights In White Satin" and she didn't just learn the chords, she learned the entire orchestration on piano and there were no parts missing. When I heard it I thought, this is impossible; take away the fact that she's blind, this is impossible for a sighted person. Now add that to the mix and it was astounding and it was great to perform with her; so yeah she's written a few songs and there's something to be said about possibly collaborating in one capacity or another and I'll be sitting in with her on Sunday. I feel it's a privilege to play with someone who can play that well and I certainly look  forward to it. She's so excitable, her innocence is remarkable; she can't see the people applauding so last time I told her they were all standing up and she says, "Yay" and gets excited; it's so refreshing."

"Progstock 2019" also features an appearance by Nektar as they celebrate 50 years of music and multiple other acts from days gone by as well as new up and comers. To find out more about tickets and the festival in general; please visit www.progstock.com.

To discover more about the fantastically talented Rachel Flowers, please go to www.rachelflowersmusic.com .