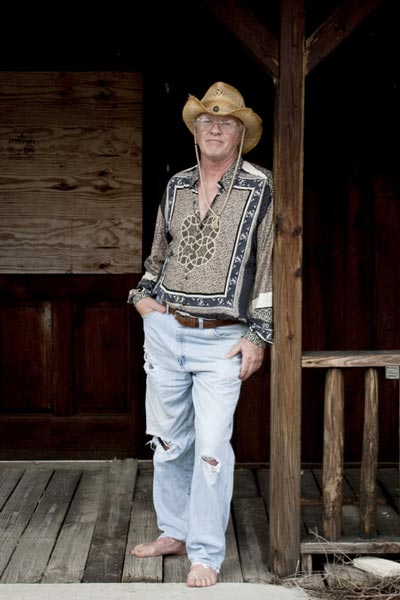 "I'm in the middle of recording my ninth album; I can't get any players in now so I'm doing it all on my own."

Stephen Foster has wanted to be in the music biz from the time he was a young child and unlike many of us who change our minds about our professions in life; his never wavered.

"In 1969, I walked into Quinvy Studio which is where Percy Sledge recorded and seriously asked them if they needed a guitar player and the guitar player for that session hadn't showed up; they gave me a chance and once I got in there I wouldn't let go. So, I played sessions in Muscle Shoals throughout the '70's and then I was signed to Twentieth Century Fox and then Janus Records and then I toured with Robert Palmer. In 1979 I went to Virginia and released my first single called, "For The Love of a Girl"and that made the Cashbox Top-10 and you know that whole thing where you think you've made it and it's always gonna be that way? Well, ha ha ha; the single stopped playing and three weeks later I was homeless. So, from there I moved to Memphis and and started a studio and played in bands. I got into bands and made a living just playing music; earlier on Percy Sledge's regular guitar player who was a big six foot five guy named Spider looked at me kind of funny and said, "You're really gonna try and do this aren't you? OK, here's how it's gonna be; you ain't ever gonna have a new house, you ain't ever gonna have a new car, you ain't gonna drink whiskey and eat steaks, you're gonna drink beer and eat burgers if you can get'em and you're gonna have to watch every penny you spend and it ain't gonna change for the rest of your life" and I thought, well crap! Then he looked at me and kind of smiled and he said, "On the other hand, you get to retire right now;" I have been retired for 51 years (laughs)."

"I play music because if I could do anything I wanted to do and I had all of the money in the world, I'd still sit around my living room and play music. I'm a musician, trained since age five; I grew up on jazz, went through the whole R & B thing, played heavy metal in Michigan, lots of rock and country and everything you could imagine. So, now it has finally evolved into the band that it has for the last 20 years which is, Stephen Foster & Howler. We put out blues and  Americana and rock songs, got some CMA and AMA nominations, charted some hits and finally over the last 10 years as I've gotten older; I'm 70 now, I've settled into doing radio promotion for indies."

Foster who plays guitar and keyboards has written with Lynyrd Skynyrd, been on bills with Drive-By Truckers, Jason Isbell. The Wailers, 5th Dimension, Ricky Nelson and more. Life hasn't been easy for this veteran music man, he has had his share of struggles and like others in the business; demons. Fortunately for us, good overcame evil and he very candidly says it comes down to just a few simple things.

"It is all about the song, "Mighty Field of Vision Anthem," that song is about; in the year 2000 I was so depressed. I am a barbiturate addict, they put me on them when I was a kid for epilepsy and once you've tasted the poppy you are forever a poppy eater. I haven't had one since 1971, I went through cold turkey and it almost killed me, it took me 10 days to walk but I quit and I've stayed quit for woe these 50 years and I won't touch them. I get moods of black depression; there's a reason there are no guns in my house. You can't tell because depression goes into the pits; I was going through this and an old friend of mine called me up and he said, "Man, I've been seeing what you're going through and I just wanted to let you know that I care; we miss you in the music business. You've disappeared for 15 years now, we miss you" and I had all sorts of friends like Pete Carr, Wayne Perkins and more came out of the woodwork and said, man don't do this. The next morning I woke up with "The Mighty Field of Vision Anthem" running through my head and it's a song about how people came out of nowhere, took me by the hand and saved my life. We've given away over a million downloads, I will not take a penny for that song and whenever I see anybody that is all down in the dumps I say hey, here's "The Mighty Field of Vision Anthem" and I just feel a responsibility and I guess I shouldn't because it's an unending task but because my life and my sanity was saved, saved by people who just cared. They didn't give me money, they didn't give me dope; they just cared and that was enough and most of the time that's all you need for relief of real depression for somebody to say, hey let's do a bar-b-que m(laughs)."

Determination and the willingness to sacrifice have brought him to this point in life and being a lover of music and musicians caused him to turn his sights in another direction; a direction that helps others just by him being authentic and understanding of their struggles.

"I was part of the initial; have you heard the term "Bust the majors?" I came up with that term in 1995, our company was the first to stream live audio; 14K baby! You could stream it on a dial-up (laughs)! Out of that came CD Baby, I formulated most of CD Baby but I just thought they were charging too much. So, I started my service and basically charge what a band can make on a weekend night; five hundred dollars. I promote indie music, no majors, I'm not that guy but I'm the guy who can get the indie band noticed; that's my job. I have a website, it is stephensindiepicks.com and the contact information is there. I have a reputation; I won't take a thousand dollars from a band on a bad song if I need fifty dollars in the worst way. I have a reputation of a set of good ears, I don't like bad music, I don't like junk and I don't like demos. So, I have three requirements, it has got to be a great song, it has got to be a great track and you've got to have a great singer and if you don't have these things I have suggested to so many bands; maybe you might want to go back and remix this, maybe you might want to  get a better guitar lead, maybe you might want to get the singer to spend two hours on his vocal instead of 20 minutes. Then when they come back to me it's for the full amount and I'm inexpensive; you've got to start somewhere. You can't just go and be Garth Brooks, you can't do that overnight, it requires guts and working the low paying gigs and it requires being retired. You just have to say, I'm gonna do this because I want to to do this and I ain't gonna do nothing else and you all can go screw yourselves; I wanna do this and that's the kind of bands that I get."

"Direct From Muscle Shoals"is a show that showcases artists that I promote,"he continued proudly. "Sometimes I'll have songs in there from other acts that don't have a dime, not a penny but I'll play them on the show because the song moves me. You can tell that it's something real, that they sat down and heard God's radio, that radio in the sky. I think everybody hears God's radio but I think there are only some of us who can hear it clearly and have the training and background to be able to write the song. You have to just listen closely, see if you can play it back and if you can't try your best to remember what went through your head or wake up in the morning with songs in your head. I hear some of these artists and that's what happened to them, it just came on them and you can tell those kind of songs when you hear them. Have you ever heard a song on the radio and when it gets to the first chorus you're already singing along with it? I'm convinced that all sorts of people from all over the world hear that radio in their dreams and when they hear that song on the radio a lot of them are saying; hey where have I heard that before? Well, you haven't! You've heard God's radio. So, I've been adding stations and carriers; we go out to 208 stations and I'm just amazed that happened but I think it's because the show is all about positive vibes. The show is about relief from depression and I don't play any negative songs on the show; the simplest place to find it is on Podomatic.com."

To discover more about Stephen Foster, his broadcasts or his service; please visit www.howler.biz.