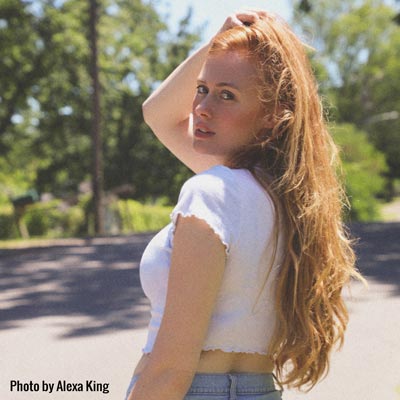 "Gypsy soul," "Unforgettable Character"and"Gorgeous with a unique voice"have all been used to describe Melody Federer; one of the most talented singer/songwriters out there today.

Melody made a recent stop in New Jersey and gladly shared about her gig and spoke of her musical journey; an intriguing, gutsy undertaking driven by determination and a desire to succeed.

"I was born in Texas down in the Bible belt; my dad was a pastor at the time but he's not anymore, he's an author,"she explained."Then we moved to St. Louis, Missouri where all of my extended family is; I have like 70 cousins because I come from a big Irish Catholic family. Then I actually moved to New York when I was 18 and lived in New Jersey for a while on my sister's couch in Hoboken; home of SinatraI believe, I just love him. Then I fell in love with this French piano player who was doing a jazz gig in New York and I saw him when I must have been about 20 years old and we sort of fell into this whirlwind romance and he convinced me to move to Paris with him like a month later. So, I moved to Paris and we started playing as a duo on the street; he would bring his piano and I would sing and then we started playing festivals and we got a little deal offer in L.A. So, I moved to L.A. and did that and then I became a songwriter for others for a while. I went down to Nashville and wrote a bunch of songs for other people and then started releasing my own music again so now I'm living in Seattle."

Wait; did she say 70 cousins? With a last name like Federer; is the tennis great Roger possibly one of them?

"I think so; distantly,"she said with a laugh."I know that we both like to cause a racket!"

Hmmm, yet another link to greatness; something this performer seems to be encountering more and more as her career progresses. Federer has written music for Kelly Rowland, Hilary Duff, Jacob Whitesides, Laura Leighe and others but lately she's been collaborating with a legendary writer and composer.

"Music has kind of taken me on a journey; these songs have taken me around the world. Recently I've been writing a lot with Burt Bacharach and that's been amazing!

Burt Bacharach is just about as good as they come and if bouncing around from coast to coast and different continents has gotten her this far; where else does she draw inspiration from?

"I think I have sort of weird tastes for a person of my age. Just yesterday I was driving and I was listening to The Foundations and those songs are just perfection to me and they don't get old. My dad kind of raised me on James Taylor who is my ultimate hero, Joni Mitchell, Crosby Stills Nash and Young, The Doobie Brothers, America and then I kind of discovered jazz in high school and loved Frank Sinatra, Louie Armstrong, Nat King Cole and then in Paris more jazz and now pop, country; I'm kind of all over the map. I do like a lot of older music from the 40's to the 70's; I don't know why but it just feels like they really captured something in time with the live musicians. One of my first memories was my dad playing my mom a James Taylor song on his guitar. He was self-taught and would play in the house or just to my mom sometimes and I remember him singing "Blossom" to her. He also taught me piano by ear, he'd just show me how to play the chords and just play around; he even wrote some songs when I was little; once again for my mom or about American history because he really likes American history."

Terms such as"Old soul"and"Born too late"come to mind when reacting to her musical tastes but this vivacious entertainer is a self-professed people person; one who enjoys stopping here on the Atlantic coast and loves interacting with fans and strangers alike.

I feel like the conversations that I have with East Coasters in New York and New Jersey are like playing a good game of tennis; lots of back and forth,"she said with sincerity."Everybody is so chatty and friendly here; they just chat with me in elevators or at the store and I think; do they know me? Then I remember, oh OK, I'm on the east coast and people are friendly."

So, Federer found herself once again here in New Jersey, Monmouth Park to be more specific as the opening act for one of her favorite performers at a drive-up concert event; something which was a first for her.

"Yeah that's the big thing! I got to open for Andrew McMahon which was mind-blowingly cool,"she stated still very excited. "I had to pass a COVID test in order to play the show so waiting on the results made me a little nervous but I was fine."

"The gig came about through my agent AJ Paul because he's worked with Andrew and they were looking for an acoustic opener so he submitted me. They got a lot of submissions and to my shock and amazement they said, "Yeah, she can do it" and I think Katie Tunstall just opened for them and she's so awesome and to be among the ranks of her and getting to open for Andrew is probably the coolest show that I've played so far in my career. I'm pretty stoked; it was pretty interesting to play for people in their cars. Night one was sold out and I think night two was as well; so, yeah..."

Melody has released a series of singles over the last several months and for this wise beyond her years artist this time around is bit extra special because the material is written by her and for her; not for someone else.

"I have singles that are getting added to rotations at stations,"she said sounding as if she was in disbelief. "The one is called "This Town" and the newer one is called, "The Wonder Years." I have this finished album that I poured my heart and soul into the last two years down in Nashville and really took my time with it. I was really specific with the vision and the instrumentation and the arrangement and lyrics and I was super picky; I just wanted it to be authentic. I've written for other people so much and this was my baby; ya' know? I put out the first single thinking; I'll just put it out there and see what happens and it's been getting a lot of alternative radio and AAA love which blows my mind because it has always been a dream of mine to have a song on the radio. The fact that, that is sort of happening is just wild; we'll kind of see what happens with this next single and take it from there. This is what you dream of from the beginning. I've spent so much time in my life and during my angsty years driving in my car listening to the radio and I still love the radio, it's just special I think."

To discover more about Melody Federer and her music, she can be found on Facebook, Instagram, iTunes and Spotify under Melody Feder.