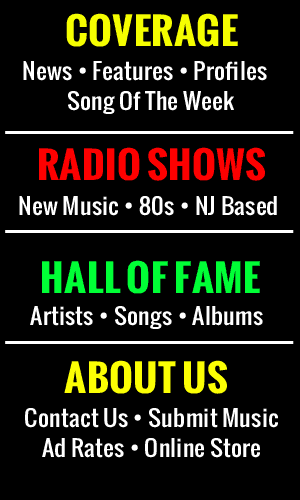 (HOLMDEL, NJ) -- Four-time GRAMMY© Award winner Keith Urban has set Summer ’22 for the North American debut of his first world tour in four years, The Speed of Now World Tour.  The tour’s newly announced North American leg, with 3x GRAMMY© nominee Ingrid Andress, will add fifty shows to the previously announced concerts in Australia, Germany, Netherlands and the U.K., includes stops at the PNC Bank Arts Center in Holmdel, NJ on July 29th, the BB&T Pavilion in Camden on July 31st, and at the new UBS Arena at Belmont Park, located on the border of Queens and Nassau County, on Saturday, October 22.
The Newton Theatre Presents the Music of Cream on June 23rd

As 2021 begins to shrink in our collective rearview mirrors; this space thought it would be enlightening and informative to publish some thoughts, musings and what some of our indie artists both locally and abroad have in store for 2022.
Makin Waves with Taylor Simon King: Sweet Celebration

His colleagues called Frank Wess “Magic,” an appropriate sobriquet in view of the exceptionally consistent artistry and professionalism he brought to every project with which he was involved throughout a career spanning 70 years. His saxophone approach was lyrical, soulful, swinging and a unique, genre-defying blend of influences including Johnny Hodges, Lester Young, Ben Webster, and Benny Carter, yet informed by bebop harmonies.

Here’s an alphabetical look at the 12 independent New Jersey artists who I thought made the most waves in 2021. Here’s to makin waves with all of them and you in what hopefully will be a much better year than the past couple!

Radio Jersey with Lee Mrowicki - The radio program that plays only NJ music every day from Monday to Friday. It covers everything from Sinatra to Springsteen, showcasing the Garden State like never before. Mrowicki was nicknamed "The Voice of the Stone Pony" by Rolling Stone Magazine and has been associated with the legendary Asbury Park club for decades.

Rock on Radio with Danny Coleman - Join Danny each week as he interviews unsigned bands, solo artists and entertainers in a laid back atmosphere. There are live performances, phone calls and interactive chat rooms to answer questions/comments. Turn on...Tune in...and...ROCK ON!

Classic Jersey - Gary Wien's tribute to rock and roll from New Jersey. Wien is a music writer from Belmar, NJ wrote the books "Beyond the Palace" and "Are You Listening? The Top 100 Albums of 2001-2010 by New Jersey Artists". He spins tracks from throughout the decades - hits, misses, and personal faves.

Beyond the Palace - Lee Mrowicki plays all of your favorites from Jersey Shore artists in this weekly show.

The Penguin is creating its own Hall of Fame to spotlight our favorite artists, songs, and albums from throughout the radio station's history... coming soon!