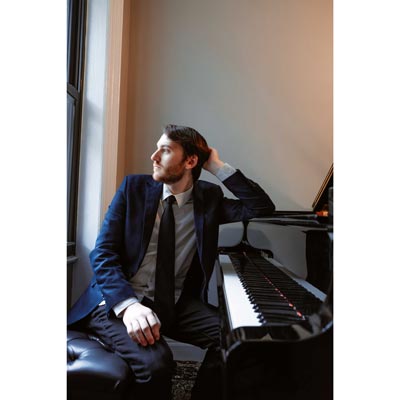 As part of Classical Keys 22/23 season, I'm extremely excited to share "Pandemic Piano Preludes." This solo recital project was a long time in the making. I commissioned five distinguished composers to write a piano prelude in the midst of the lockdown when music was silent and we were all at home reflecting on trying times.  I will be premiering preludes by: Julian Bennett Holmes, Stephanie Ann Boyd, Thomas Weaver, Noah Kellman & Harry Stafylakis. This solo recital will also feature standard prelude favorites such as: Bach, Debussy, Scriabin, Rachmaninoff, Gershwin, and rarely performed preludes by Roslavets & Irene Britton Smith.

Daniel Colalillo is a New York based classical pianist. As a soloist, he is known for delivering strong commanding performances and unique interpretations with a depth of musical integrity. He has been lauded by “The New York Times.” Daniel has given solo recitals at venues such as: Carnegie Hall, Steinway Hall, Bargemusic, Symphony Space, Columbia University, Princeton University, and has performed in various cities such as: Philadelphia, San Francisco, Nashville, Toronto, Montreal, and more. Apart from his solo career Daniel is an active chamber musician, accompanist, and teacher where he maintains a private studio in upper Manhattan. He recently became a Musician Owner and is on the Council of Groupmuse, which is a series of chamber music house concerts in the US and abroad. He is the Founder and Artistic Director of Classical Keys where he runs a Concert Series in NJ & NYC. Daniel has his Master from Mannes. DanielColalillo.com