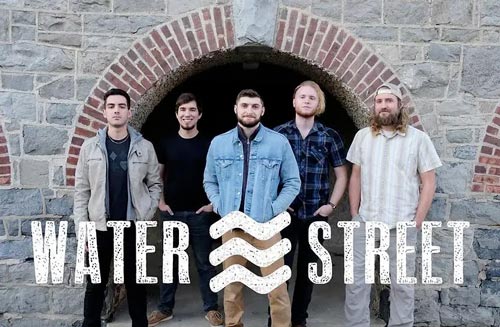 Water Street is a Pop/Americana  group from the northwestern hills of Blairstown, NJ.  Formed  in 2014,  the band began playing in an old warehouse on Water Street where vocalist/guitarist Dave Paulson lived with his family.  The band adopted the name Water Street as a nod to their roots and began playing out, starting at coffee houses and open  mics, later moving to stages at venues like The Bitter End, The Stone Pony and a main stage at MusikFest. Water Street takes the  Americana standards  of acoustic guitar and  mandolin, but mixes them with electric guitar and a prominent  rhythm section which rolls with a hint of a funk groove.

​In 2016 the band released their first full length album Waiting for Martin, a 10 track album of original songs to rave reviews. Their follow-up EP Dear You  was released in 2017. The band’s third album, All We Tried To Be,  debuted in March, 2022. With members Dave Paulson (guitar/vocals), Connor Konecnik (drums), Joe Byrne (bass) and Mike Stark (electric guitar), Water Street continually delivers a unique and authentic musical experience for their  audience and are certainly a band on the rise.