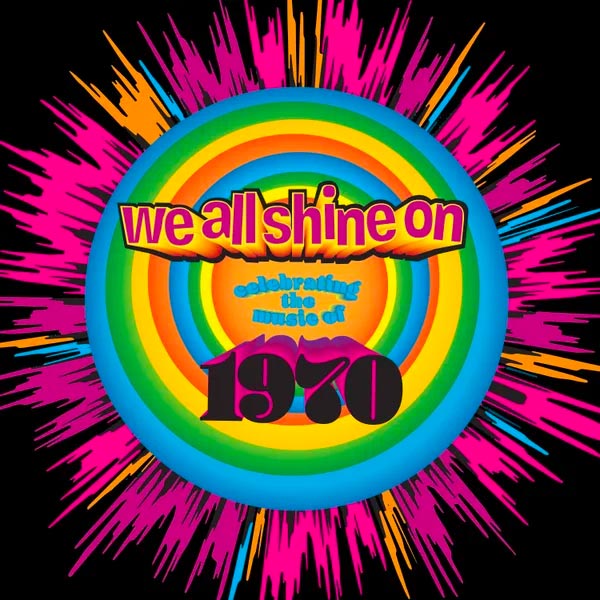 SPYDERPOP RECORDS has announced the August 26 release of an all-new CD and digital compilation: WE ALL SHINE ON: CELEBRATING THE MUSIC OF 1970. Featuring 22 of the finest current indie pop/rock acts offering their interpretations of the sounds of 1970, the album will hit record store shelves and all digital platforms worldwide on the street date and is cleared for airplay and review now. The album, produced by music journalist/ author/drummer John M. Borack, will thrill and surprise fans of both yesteryear’s classics and the thriving 21st century guitar pop scene with its bounty of fresh takes on radio hits from this halcyon era over fifty years ago.

From Neil Diamond to the Kinks and from Melanie to Donovan, there is a potpourri of pop music present and accounted for on WE ALL SHINE ON: CELEBRATING THE MUSIC OF 1970. The watershed year 1970 was truly a special one in music: The Beatles released their final album, broke up, and saw each of their members find solo success. Led Zeppelin and Black Sabbath stoked the early fires of both heavy metal and AOR. Artists such as James Taylor and Cat Stevens brought singer/songwriter vibes to the charts. The Stooges and Velvet Underground shone as early precursors of punk rock, in music and attitude. Glorious one-shots by the likes of Edison Lighthouse and R. Dean Taylor littered the top 40. There was most assuredly plenty of memorable music released throughout the year.

Perhaps only John M. Borack with his credentials as a music journalist (Goldmine Magazine, the Shake Some Action power pop guidebooks, The Beatles 100) and a musician could have assembled the artists here, all embodying the spirit and craft of the songs being covered. The collection draws on the illustrious rosters of SpyderPop (Lannie Flowers, Danny Wilkerson, Bill Lloyd, The Used Electrics and more) and their partner label Big Stir Records (The Brothers Steve, sparkle*jets UK, The Armoires). It also reaches further into the vibrant modern pop scene with contributions from guiding lights such as Mitch Easter, Bobby Sutliff, The Legal Matters, Chris Price, along with more than a few surprises. They’re all paired with songs suited to their considerable and unique talents, making the record a portrait of the best in music then and now. This August, hear how WE ALL SHINE ON, with as much talent, passion and hope as ever.