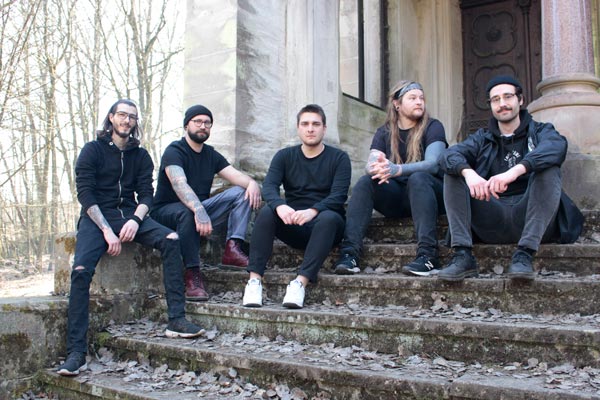 Truth & Tragedy is a post-hardcore 5-piece from Bamberg, Germany. Their music is a mixture of alternative genres including (post-)hardcore, metalcore and pop-punk. The Penguin Rocks presents this interview with Truth & Tragedy.

Truth & Tragedy formed in September 2020, right smack bang in the middle of Covid lockdowns. We initially started as a duo between Aaron and Freddy when we couldn’t meet up with our previous band, and at first it was really just a way to get around restrictions and keep playing music! But suddenly the project gained momentum, and when the world started opening up again, we knew Truth & Tragedy couldn’t stop there! When we were naming the band, we initially considered ‘Triumph & Tragedy’, inspired by lyrics in ‘Aftermath’ by The Ghost Inside. But after some discussions (and a few beers!) we settled on Truth & Tragedy.

Who are the band members and what instrument do they each play?

Tell me about your latest record.

We released our latest EP ‘Blood on Blood’ in May this year. ‘Blood on Blood’ is a 3-track EP about family and love, and explores both the happiest and and most tragic moments of our family lives - the birth of a son, and the attempted suicide of a brother. We are really proud of this EP, and the songs on this release are extremely personal and really close to our hearts. Our first track ‘Artery’ is a moody instrumental written by our guitarist Kai; ‘My Brother’s Keeper’ is a brutal and bitter message to a brother following his attempted suicide, exploring the endurance of familial love; and ‘Neo’ is Freddy’s sweet tribute to his new-born son.

Since forming in late 2020, we have released an EP ‘Thanks For Nothing’ (2020), a single ‘Helmand’ (2020), a full-length album ‘Innocence Abandoned’ (2021), a second single ‘Kelvin’s Not A Rockstar Yet’ (2022) and our latest EP ‘Blood on Blood (2022). We are constantly experimenting with new styles, and with us being less than two years into this project, it’s hard to say exactly how we have changed! Our sound is constantly evolving as we try out new styles and are inspired by different genres, but our tracks tend to have a similar feel, even if their root-styles are vastly different. Something that has definitely changed is the way we write tracks with live shows in mind - when Aaron and Freddy first started Truth & Tragedy as a duo in the middle of lockdown, we weren’t thinking about live shows at all, so we weren’t shy in layering vocals and adding extra guitars here and there when writing the tracks for our first EP! So later, when it came to playing them for live shows, we had to make quite a few changes to make them playable live! And of course the band changed in 2021 with the edition of Kai, Vitali and Domi, and we now have three more creative minds mixed in with the writing process!

One of our favourites was actually one of our first! We played Dislike Magazine’s festival last year alongside some amazing bands like Oceans, Our Mirage, Marathonmann, Watch Out Stampede and Sperling - not only was it amazing to share a stage with these renowned bands, but it was also a great feeling to be playing live again, and to feel like the world was returning to normal after so long!

Up until now, we have mainly been playing shows in and around our hometown of Bamberg in Bavaria, Germany. Usually when we get asked where we’d like to play if we could, we say we’d love to get across to the UK - but now we can happily say that’s exactly what we’ll be doing! In February 2023 we’ll be heading over the channel for a UK Tour, which we are totally psyched for! Then in April, we’ll be catching the EU countries we missed this year, with another EU Tour in the planning stages! So right now we’re basically living the dream! Keep an eye on our socials (@truth_and_tragedy) for a city near you and come party with us!

The next big step for Truth & Tragedy would be to get in a position where we could start touring full time! Right now we are focusing on the live shows coming up this year and throughout 2023 - our goal up until now has been to organise opportunities to play our music in every corner of Europe and to finally get on the road. It’s taken a lot of work to get into this position, and we can’t wait for September! It marks the start of our touring careers, and takes us onto the next step for Truth & Tragedy as a professional band. We’ve already achieved a lot as a new band, and we feel that if we keep going with this momentum, no goal is unreachable!