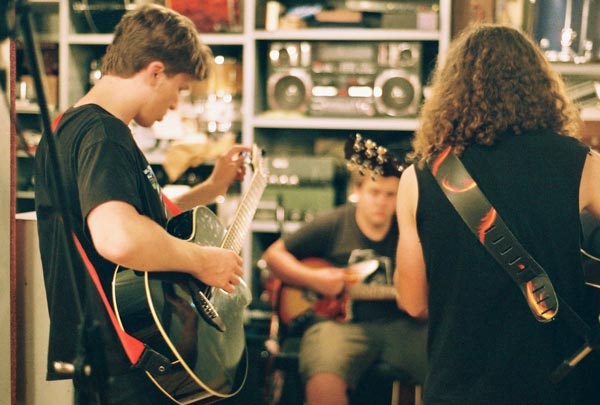 Stonebrother is a hard rock band based out of Nova Scotia, Canada. Their Bandcamp page says the band combines the raw energy of 70s punk rock with the shredding solos and thundering bass of Van Halen and Metallica and has influences ranging from heavy metal, to grunge to pop. The Penguin Rocks presents this interview with Stonebrother.

(Ethan) The band has been around for the better part of a decade in some form, it started with just me and Zach jamming to Beatles tunes and Green Day stuff in our basement. Eventually it became “man, this is actually pretty cool” but we needed a bass player. We’ve had a few along the way and they were all great but they didn’t have the special je ne sais quoi, then along comes Leo introduced to us by a family friend. We get to jamming with him and we have this moment of “holy crap, this dude is incredible” and the rest is history.

The story behind the band name is we needed one, desperately. We’ve gone through so many names, some better some worse. Then one day Zach comes in and says “boys, what do we think of the name ‘Stonebrother?’” And we collectively agreed that’s a great name.

(Zach) The last thing we released was the Every Second Counts EP. Of those songs, I would say End Of The Line is my favourite because I think it shows a lot of energy, showmanship and musicality. It’s definitely one of my favourites to play live.

(Ethan) We have two EPs out as of right now entitled First Things First and Every Second Counts, released in that order. As a band our sound has evolved quite a lot in between those releases. Our songwriting has improved, we’ve gotten more willing to experiment with weird sounds and just make the songs as good and full as they possibly can be. Not only that, but for the Every Second Counts EP (and hopefully for our first full album we’re hoping to record this summer) we got into a proper studio which pushed the quality of the sound itself up to the degree it needed to be.

(Leo) Playing Gus’s pub, a little divey bar in Halifax. The staff was super nice and it was a very fun, freeing place to play, great for lots of energy!

(Ethan) The “next step” I think we need to take is record and release our album, get some music videos, and as many shows as humanly possible. Just get the word and spread to as many ears as we can get.

(Zach) We work in a few covers in our show. We do ACDC, Led Zeppelin, Van Halen regularly, but we’ve done all sorts of stuff. Rush and Guns n Roses have definitely come up a few times.