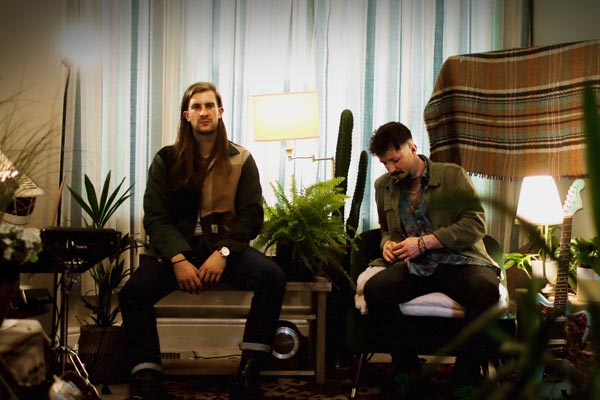 Slomo Casino consists of Jonny Ball (Guitars/Vocals) and Jack Batchelor (Drums/Head Chef).  They are two old friends who met at music college in Liverpool and bonded over a love of good food, Gears of War and Japanese anime. Years later, playing separately in many bands, Stockport/Manchester based Indie pop/soul duo Slomo Casino was finally formed after a series of drunken voice memo song ideas to each other revealed that they actually had something going together. The Penguin Rocks presents this interview with Slomo Casino.

Our debut EP was released November 2021, and our name came down from a trip we had on a 4 mph narrow boat, where torrential rain kept us inside playing casino games.

(Jonny) We had a single come out March 18th with our take on the Grover Washington/Bill Withers Classic "Just the Two of Us". (Assuming we haven’t ruined it!) I’m most proud of how we’ve converted what is a belter of a soul track into our own breezy indie pop style. And recording Jack’s conga parts ourselves from my house was a pleasantly surprising success...

One EP thus far, with EP number 2 on the way later this year. You can expect more of the same with and added hint of soul from our influences… but very much that same hooky indie pop style that earned the Casino it’s stripes...

(Jonny) Our homecoming EP launch in Manchester November 2021 sold out and we couldn’t have asked for a better audience. It was also our first opportunity to play our debut EP in full which was a top notch experience.

Naturally our base is in the UK and specifically in Manchester, but we’ve played as far as Malta. Japan would be the dream!

Our next step is to release our second EP and naturally, work towards our debut album 2k23! (And to take over the world in one foul swoop)

Although we have some covers upcoming of some of our favourite tracks later this year starting with Bill Withers, we one day aspire to cover Cliff Richard.