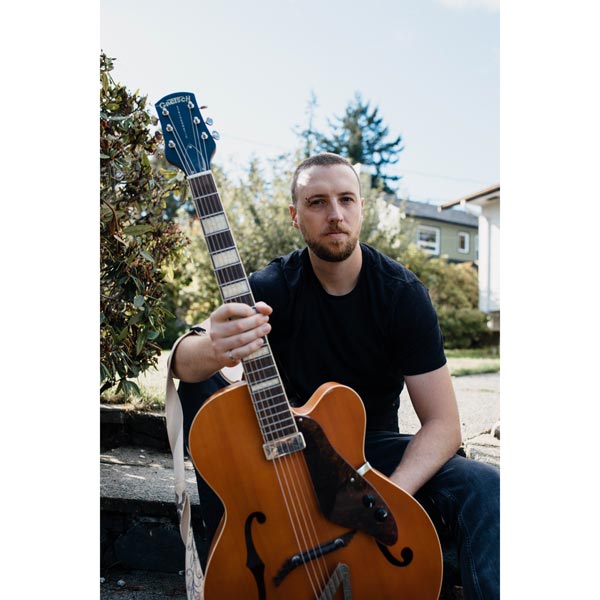 Hootin (i.e. Nick Houghton) is a singer songwriter and multi-instrumentalist from the west coast of Canada. The Penguin Rocks presents this interview with Nick Houghton.

Tell me about your yourself. Where are you based?  What type of music do you play?

I’ve been in the world of music for as long as I can remember. One of my earliest memories was as a 6 year old playing Cotton Eyed Joe on the violin in a traveling show. In my teens I took up the drums, playing in every jazz band, orchestra and musical in the B.C. area, eventually enrolling at the local conservatory, where I got to work closely with jazz icons like Paul Horn and Misha Piatigorsky. After University I played with the funk rock band The Party On The High Street, performing constantly all over the world for six years, releasing 5 albums, one of which was recorded at Bear Creek studios with Ryan Hadlock, a Grammy nominee for his work with the Lumineers. While with The Party on High Street we partnered with a pair of actors and helped write a musical titled The Saints of British Rock.

This is my first venture as a solo artist, after 6 years on the road with TPOHS and the subsequent hiatus from music during which I lived in Los Angeles, I’ve returned back to my home in Canada, where in 2021 I released my first full length album “Exit Conditions" and followed it up with a single Wake Up Call in January of 2022 and a second in May of 2022 titled The New Queen.

It has taken me quite a while to come to a description of the style of music I create. The best I have come up with so far is “Expressive Alternative”. Being a drummer by trade, rhythm and energy are usually the most important factors in good music for me; lyrics being a close second. I usually begin writing a new song with the drums or percussion to define a feel. From there I take time to think about all of the things that have been going on in my life that tend to otherwise be hard to express verbally; things I’ve been feeling, thinking about but maybe struggling to articulate… I then pick one of these ideas that I think fits the energy of the track I've put together so far. I build the rest of the instrumentation to fit the tone and timbre of the idea I’m trying to express. Finally, I then find lyrics that don’t describe the feeling I’m trying to express… but demonstrate it. I want each of my songs to be about something. A concrete idea that I can name but allows the listener to have their own experience with. For example, the first track of my recent album “Exit Conditions” is titled Wisdom. It is about the exchange that we all make: the time we have left on earth, for the experience we gain. It's a sort of transaction we all make throughout our lives, but affects each of us differently. I want each listener to reflect on their own transactions: how it shaped them. The instrumentation underneath is driving yet jagged, much like the ups and downs of life.

How long have you been playing music? Tell me about the name Hootin.

I started releasing music in early 2021, I believe. “Hootin” is a mashed-up contraction of my last name: Houghton. The nickname first made an appearance during my days with The Party on High Street. My favorite animal is an owl, when our  guitarist found this out he started hooting at me while we were on stage. Eventually this morphed into sounding like my last name. From there I couldn’t escape it and decided it was best to just embrace it.

Are you a solo artist now?

I’m a solo artist. I do pretty much everything in all of my recordings. I have a few close friends I turn to for occasional guitar solos, or writing polish but for the most part it's all me.

Tell me about your latest album.

My last full album is called Exit Conditions which I released in 2021. It has 12 tracks I recorded entirely in my home studio and was produced by Brin Porter of Swampdog Studios. It's a very eclectic album, mostly because I didn’t really intend to make an album when I started. I set out to record a couple songs over a two week holiday but more and more kept creeping out.

I started actually a long time ago with an album I did very casually that’s self titled. I was mostly goofing around with friends and trying to discover my style. It was while I was touring relentlessly with an old funk rock group called The Party on High Street so I didn’t really take it seriously or put a ton of effort into it… After I left TPOHS I took a number of years away from music. I started again by putting up some bedroom recordings on youtube in 2019… I think I did four or five; these never made it to spotify or iTunes, I was mostly (again) trying to find my style/voice. Then Exit Conditions happened. Since then I have been releasing a single every 3-4 months. I have so far released two, Wake Up Call and The New Queen.

I consider myself a recording artist and am not performing at the moment. When I was playing with The Party on High Street we were playing at Wild Mountain Music Festival in Hinton Alberta. It was really exciting because it was our first show with some big name Canadian acts. Each night had a headliner, but after the headliner was a late night act that played on the same stage. We were lucky enough to be booked as the late night act after the Saturday night headliner, Blue Rodeo. The festival grounds were packed for Blue Rodeo’s performance, so we were excited to get a lot of their residual crowd when we went on. But no one told them about the late night acts. After they finished, they and all their roadies left with a lot of their equipment still on the stage, thinking that the program was done for the night. We couldn’t get on stage to set up because the stage manager wouldn’t let us on with their gear in the way and wouldn’t move it without their permission. It took two hours for us to get on stage, by which time most of the crowd had dissipated. We still had a great time and an ok crowd but it makes for a funny story.

What would be the “next step” that you’d like to see happen?

For now I am focused on recording and releasing a new single every 3-4 months. My next step would be to get back on stage but I don’t intend to do that for about a year.

Finally, do you do any cover songs. Who would be an artist you haven’t covered yet that you’d like to cover?

I haven’t done any covers yet. If I were to record a cover track I would want it to be an old song everyone knows, but completely change it. Something along the lines of an upbeat electronic-ish version of Elton John’s Rocket man… or something like that. For now though I really enjoy working on my own music.