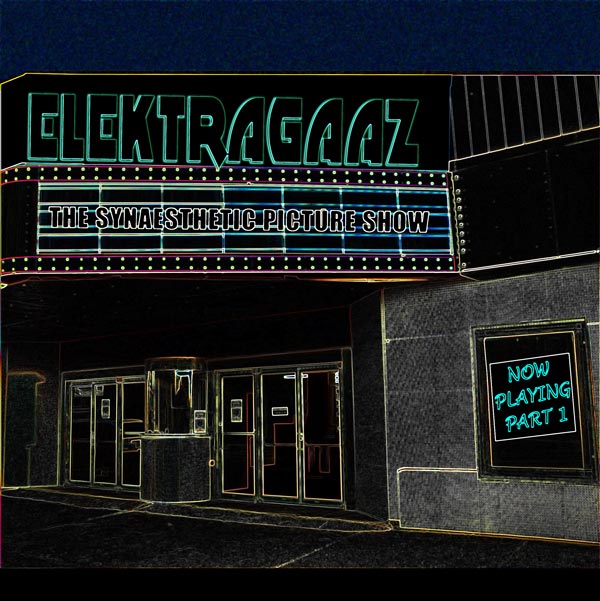 Elektagaaz exists in both the real world and in a fictional universe, a volatile blend that can be bewitching or bewildering or both. The music too can bewitch or bewilder, drawing on such far flung influences as classical music, hip hop, rock, club, techno, pop, dance, film noir, comic strips and video games– all precipitated by Poppo Redband’s neurological condition which causes him to see music as well as hear it.  The Penguin Rocks presents this interview with Elektagaaz.

Where are you based? Elektagaaz is initially “powered” by a reclusive young Frisian composer who uses the pseudonym of Poppo Redband, though he normally just goes by Redband. The rest of the band is from the New York metropolitan area.

What type of music  do you play? We describe our music as electronic multi fusion. It’s an instrumental group, no vocals/lyrics, at least not at this point.  One commentator has described the music as a successful combination of a variety of genres “ranging from the sizzle of jazz, baroque aromas, the smooth elongated flows of prog-rock, the energy of dance, and the heft of alt-rock.” We like to think that Elektragaaz is the music of the future. Your future.

How long has the band been around? Is there a story behind the band name? The music for Elektragaaz started to be composed back in 2017. before the band ever came into being. Redband initiated the project with a telephone call to Trebor “Big T” Lloyd, a New York producer at City Canyons Productions in New York City. Lloyd agreed to listen to the material that Redband had composed. Intrigued after he heard the compositions, Lloyd set about to find what he considered to be the cream of New York area musicians. The result was Elektragaaz. While the band was in a state of flux for awhile, the current and final version came into being by 2019. The name Elektragaaz symbolizes energy, power, excitement.

Jasper Dutz aka Jas Windstorm: Over the course of my affiliation with the band, I've contributed several woodwinds to the mix. They have Included Bb and Bass Clarinets, Flute, Piccolo and Alto Flute. Soprano, Alto and Tenor saxes! My favorite instruments for this music are probably Alto Flute, Soprano Sax and Bass clarinet. I just feel like among those three you can have a totally eclectic palette of sounds that could really work in any musical situation.

Josh Henderson aka Josh Firebow: Depending on the track,  I’ve played electric violin, violin and/or viola.

Tom McCaffrey aka Tom Elektron: I play guitar on the tracks and mainly switch between a Jazzmaster, Telecaster, or an SG depending on what the track calls for.

Kathy Sheppard aka Kathy Kaos: I’ve been with Elektragaaz since the beginning. I play all things keyboard including piano, synthesizer and keyboard effects

Tell me about your latest release. What songs are you most proud of on the record?

Our latest recording is the EP, The Synaestethic Picture Show Now Playing, Pt. 4 is the fourth in the The Synaestethic Picture Show series. It was released on February 20, 2022 on Ais Records and distributed by The Orchard.  Different members of Elektragaaz have different favorites. Here are some comments by the band on their favorites from the fourth EP:

Jasper: My favorite track on this release was probably a tie between "An Autumn Dance, A Dying Fall" and "CounterSpy." I got to work closely with Kate on Autumn Dance which was an absolute pleasure. Also bass clarinet is probably my favorite instrument to play. I really enjoyed contributing some saxophone to "CounterSpy" as well because I got to be more soloistic and it was such a contrast from the style of saxophone playing I typically do at jazz clubs or in chamber music.

Josh: CounterSpy - I enjoyed the narrative aspects of the track in particular, and even though very new sounding, the "vintage" flavor of the piece.

Tom:  My favorite song to work on from EP4 was Counterspy. It gave me a chance to channel all of the cool retro sounds from an old spy movie soundtrack. I played a Jazzmaster guitar on it and incorporated a lot of the tremolo bar.

Mat: My favorite track on this EP is CounterSpy. I really like its vibe of dark intensity, and I enjoyed getting a bass sound influenced by old spy movies with a hint of grunge.

Kathy: For me, this is a toss-up between The Defiant Ones and Here Comes Your Girlfriend.  The first is a serious, almost heroic piece with a driving beat and memorable melody.  The second has a sweetness and simplicity to it that I find endearing.  So, there are two opposite moods expressed.  I tried to use keyboard sounds that would convey these different moods,  using a lead synth in the first, and a steel drum in the second.

How many records, eps, or singles has the band put out in total?  The band has put out 4 EPs of 6 songs each, all part of The Synaesthetic Picture show series.

How has the band changed over time? The band, at the beginning as it was finding its way, featured some fine musicians that have moved on to other projects. It consolidated a couple of years ago with the perfect line-up including some of the most talented and versatile musicians in the New York area.

What was one of your favorite gigs? What made it memorable? Sadly at about the time the band would have been planning to go on the road, the pandemic shut just about everything down. We are looking forward to our first live gig!

What would be the “next step” that you’d like to see the band take? After the EPs, we’d like to put a physical album together, maybe employing an enhanced or immersive sound format. Then, of course, we’d finally like to do some live appearances. Our live appearances are planned to be a totally immersive and wild multimedia experience for our audiences.

Is there one or two songs that you’d say best represents your band?  We'd say that Cabin Fever from the first Synaesthetic Picture Show EP, Sister Sangfroid from the second EP, Sebastian's Apple from the third EP and CounterSpy and The Defiant Ones from the final EP represent the range of Elektragaaz pretty well. Dancing with Evil Intent, for which we did a Youtube video, was also interesting.  There were a couple of additional interesting comments from the band on this question.

Tom: I always thought “Cabin Fever” was a really strong one because there are very defined themes that establish themselves and then play off of each other. Everybody’s personality could be heard very clearly on that track.

Mat: I'd say Sebastian's Apple, due to the mix of classical and psychedelic/electronic influences plus experimental features like tempo changes and unconventional harmony. The Defiant Ones also captures the frenetic, playful spirit that I feel is at the core of a lot of this music.

Finally, if the band does any cover songs. What artists do you cover? Who would be an artist you haven’t covered yet that you’d like to cover? All our material is original, so no covers. There are many artists we admire and are influenced by however: Gorillaz, Queen, Frank Zappa, Miles Davis, Porcupine Tree, the Beatles, Bach…the list goes on.