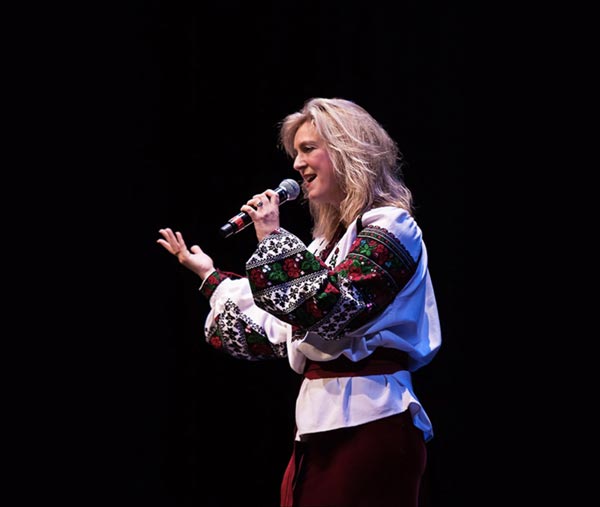 Ukrainians around the world have been enjoying Connecticut-based Olya Fryz’s music for more than 25 years. The multi-talented vocalist-bandurist has performed throughout the U.S. and Canada at numerous festivals, interactive children’s shows and concerts, including Lincoln Center in New York City, Bloor Street Festival in Toronto, The Bushnell Theatre in Connecticut, Chicago and Rochester Ukrainian Festivals, the former Garden State Arts Center in Holmdel, and the United Nations International Citizens World Music Concert.

Also an elementary school music teacher, Olya has four albums to her credit: “Zhadaj/Remember,” the 1992 self-titled debut of Ukrainian folk songs and original tunes; the 1994 follow-up, “Zaprosy u sny”; 1995’s “Mamyni Kolysanky,” featuring classic Ukrainian, as well as original lullabies; the 2005 children’s collection, “Shcho za Hamir”, and 2010’s “A Ukrainian Christmas.” The most recent LPs were recorded with New York City-based Slau Halatyn, a singer-songwriter and producer-engineer who will share the bill with her on May 15 at URSB Carteret Performing Arts Center. Also performing at Stand with Ukraine will be Iskra Dance Ensemble, The Boyan Choir, and violinist Alexei Yavtuhovich.

Tickets to the 2 p.m. show on May 15th are $20, $10 for seniors and children younger than 12. For tickets and info, click here. For more about Olya, visit olyafryz.com and enjoy the following interview.

Do you have family or friends in Ukraine or who’ve fled Ukraine? If so, how are they doing? What have they told you about what’s going on?

Yes, very many. My twin sister, cousins and aunt live outside of Lviv, and at first, my aunt, who is 82, just wanted to stay home. She said she was older and wanted to stay back just in case her grandson came back. She didn't want him to see an empty house. But there were too many safety concerns, and sirens kept them up at night. My cousin’s granddaughter cried every night terrified to go to sleep. Finally, my cousin was able to convince her mom and twin sister’s family to come to Holland. There is still one cousin’s son who is in the military for Ukraine, and they are very hopeful that he will safely return home. They are still in shock that this is happening. It’s as if this was a movie from WWII, just tragic, horrific.

Given your strong Ukrainian heritage, how does it feel to participate in a fundraiser for the refugees?

This has been so heartbreaking and terrifying. The songs that we learned to sing were about our parents’ and grandparents’ history, and now this is the reality for Ukraine and its people. How could history be repeating itself? Sometimes I feel so helpless, but I know that through our songs and my bandura, which is the 58-stringed national instrument of Ukraine, we could help share our culture and the truth of what is really happening there. I feel as if this is the least that we could do to help raise funds for and awareness of the war.

Have you performed before with any of the other Ukrainian acts with whom you’ll share the bill on May 15 at URSB Carteret Performing Arts & Events Center?

Yes, most of them. I've performed with the Iskra Dance Ensemble for various occasions, and I used to dance with the Syzokryli Dance Ensemble in NYC with Iskra's choreographer Andrij Cybyk. On the musical side, I've performed with Slau Halatyn & Oles Kuzyszyn at several venues around the tri-state area, including the Garden State Arts Center. Additionally, Slau Halatyn produced my Ukrainian children's CD & my Ukrainian Christmas CD. We had met back in the late ’70s at the NY School of Bandura. 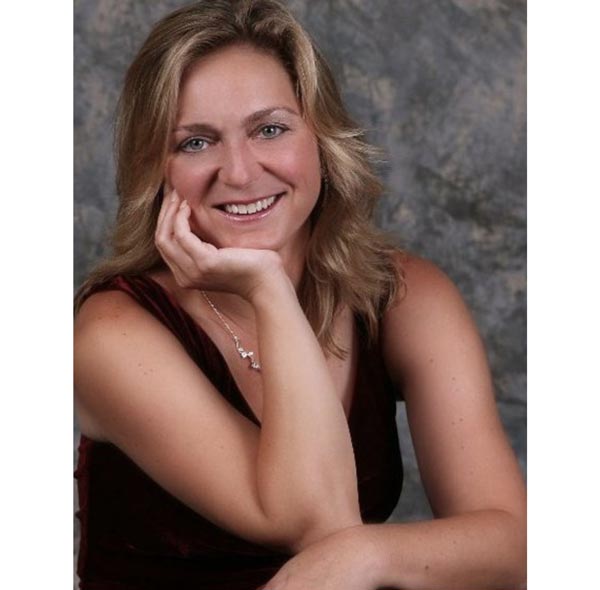 Were you born in Ukraine?

No, I was born in New York City. I am a first generation Ukrainian-American. My father was born in Western Ukraine, and my mom was born in Poland. They were the only members of their family that made it to America. My dad was a WWII refugee but then served in the American Army for the Korean War. He always said he was honored and proud to serve his new country of freedom.

I was lucky enough to visit Ukraine in 1993 with my father, who wanted to see his brothers and his homeland one more time. He was very sick with cancer, but it was such an incredibly emotional and unforgettable trip. So grateful and blessed that we were able to visit and see Ukraine with him. It's a trip I'll remember forever.

What inspired your love of Ukrainian music and dance?

We went to a Ukrainian church in Queens, N.Y., that also had Ukrainian school on Saturday mornings. It was there that I first started singing in the choir, folk and ballet dancing, and playing my bandura. Our summers we spent near Soyuzivka, a Ukrainian resort in Kerhonkson N.Y., so we always had Ukrainian songs, music and dance all around us. I also experienced Ukrainian music workshops, dance camps and culture courses through the years and joined several vocal and dance ensembles.

How many albums and original songs have you released?

I've released five solo albums, including two folk and contemporary recordings and Ukrainian children's, Christmas, and lullaby albums. Also, I've been a part of five other ensemble recordings. Most recently with the Women's Bandura Ensemble of North America. I've only released one original song and it was the title cut of my first Ukrainian solo CD called ‘Zhadaj (Remember).’ I've recorded other originals in English but never released them. Something to think about!

What percentage of your original songs are influenced by Ukrainian music?

I would probably say 50 percent, and that's how I speak, switching back and forth from Ukrainian to English. We have a phrase called ‘half na piv,’ which means half and half in both languages.

What is your favorite Ukrainian folk song to perform and why, and on which of your albums is it featured?

This is such a hard question because there are so many in various styles for different reasons. One of my all-time favorites is ‘Oj Hylia,’ a beautiful love song about a young pair who are hoping to have dinner together after working hard in the fields all day. It’s accompanied by my bandura, and it’s on my first album. I learned this song many moons ago at bandura music camp and so many heartwarming memories are attached to this song.
For centuries, the Soviets have tried to silence the bandura because of the soul and spirit that so many of her songs possess. Behind every song is a story, and bandura players were minstrels that would travel from town to town sharing songs and stories of what was happening in Ukraine. Even today, there are bandura players traveling from towns to villages in war torn areas trying to raise the spirits of Ukrainian people.

When and where else will you be performing in the coming months, and are any of those shows fundraisers for Ukrainian refugees or war efforts?

I feel like I can't do enough! But I've already performed at several fundraising concerts: March 18 at Music for Ukraine, March 20 at Musicians for the Greater Good, and April 1 at New Haven University’s International Festival.

I was also a part of a compilation of Ukrainian-American artists with almost 40 songs. All proceeds will be going to humanitarian aid! It’s a wonderful, varied collection of musicians and artists: Ukrainefundraiseralbum.bandcamp.com.

June 3 to 5, I will be performing at a Ukrainian Folk Festival in Chicago and from August 19 to 21, I will be the master of ceremonies a featured artist at the 50th Anniversary Ukrainian Festival in Rochester, N.Y. Certainly a portion of the proceeds will be going toward Ukrainian relief efforts. I’m sure the summer will bring forth many other fundraising opportunities, such as our Bandura Music Workshop here in CT at the end of June. Details are still being worked on.

Many of our friends wondered why it’s not correct to say ‘The Ukraine.’ The Ukraine was a soviet tactic to try and territorialize Ukraine, and make it sound like it was just a section of Russia and the Soviet Union and not its own country. If you think about it, you never say The Italy or The Poland; it’s just the name of the country. Media has definitely gotten better with this, but every once in a while a reporter will slip and put the ‘The’ in front of Ukraine.

Bob Makin has produced the Makin Waves music column since 1988. For more about Makin Waves, visit facebook.com/makinwavescolumn. Contact him at makinwaves64@yahoo.com.