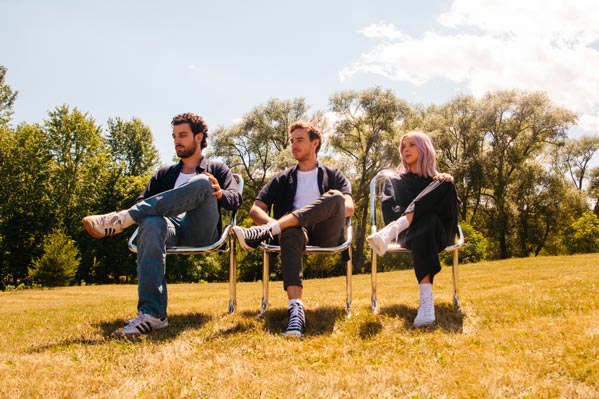 (ASBURY PARK, NJ) -- Indie trio Wild Rivers will bring their acclaimed live show to Asbury Lanes on February 15 at 8:00pm. After selling out dates in New York, Los Angeles, Nashville and more on their fall 2021 tour, the band is back on the road to support upcoming album Sidelines, out February 4 (Nettwerk). Corey Harper will open the night.

Wild Rivers' genre fluidity and warm, nostalgic sound has resonated deeply with fans across the world, garnering the band over 200 million streams, 2.1 million monthly listeners and 100k+ followers on Spotify. On Sidelines, the band has upped the ante, crafting a masterclass in sophisticated pop music. Co-produced by Peter Katis (The National, Interpol, Sharon van Etten) and Wild Rivers, the new album eloquently captures the post-college mid-20s experience with a biting sense of emotional maturity.

Late last year, the band put out “Neon Stars”, a sparse, plaintive ballad about the ephemerality of young love and the pain of nostalgia, co-written with noted Nashville songwriter Caitlyn Smith. The Boot featured it as one of their Weekly Picks, saying that "the band regrets misspent youths and squandered dreams in the sweetest way imaginable.” A track called "Weatherman" - an airy and upbeat song about the uncertainty of life - exists on the opposite end of the spectrum sonically.

In the middle, there's "Better When We're Falling Apart", a poignant ode to the toxic relationship. The serene groove of this track perfectly epitomizes Wild Rivers’ special knack for blending characteristics of classic ‘70s singer-songwriters with modern-day pop techniques.

Tickets are $19-$21 and available for purchase online. Asbury Lanes is located at 209 4th Avenue in Asbury Park, New Jersey.  The show is open to 16 and over.

Since the band's debut in 2016, they've steadily amassed a zealous fanbase that turns out in droves to see their deeply reflective yet painfully relatable love stories in a live setting, full-heartedly belting out every word with the band. On their winter 2022 tour, Wild Rivers is once again teaming up with REVERB on their Music Climate Revolution initiative to create a carbon positive tour, reduce its environmental footprint and eliminate greenhouse gas pollution on the road.