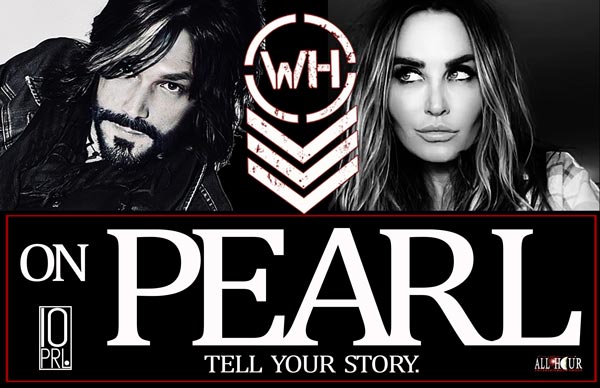 After a pandemic that brought the country duo and their weekly “The Willi Ho Show” to the top of the international Pollstar Livestream charts, two sold out appearances over the last 6 months at The Vogel, Reagan and Gordon of Williams Honor are looking forward to returning to mask-less public performance.

On Sunday, July 4th at 5:00pm, Williams Honor will perform on the High Noon Beach Stage at Atlantic City’s new home for country music, Bourre. Sponsored by Cat Country 107.3, the new venue is located just steps off the boardwalk at South 201 New York Ave, and offering free parking, a full food and cocktail menu, and a chance to hear Jersey Country the way G & R intended with their full band and all the fireworks. In case of rain, the show will move inside the venue.

They’ve also set plans to help launch onPEARL, an exciting new series for the Monmouth County tri-city community on Sunday, July 25th at 5:00pm at the 10PRL event space in Long Branch. The series hopes to raise the bar for bringing the audience closer to each artist. Each show has the artist “Tell Their Story” with an expansive backdrop called a cyclorama. Multi-media content will bring each performer’s story to life and features a question/ answer dialogue at the end of every show. Community support will be featured throughout and promises to feature the best and most supportive businesses of the Jersey Shore.

George McMorrow, and his team from Cinecall will be shooting the event for later broadcast. George directed WH’s 'Send it to Me' video as well as the most recent Springsteen performance honoring Woody Guthrie. The Asbury Ushers will also be on hand to help seat everyone throughout the venue and bring the show to life.

April Centrone, owner of 10PRL says, “We are so thrilled to be finally past the pandemic and back to what makes our heart beat. We at 10PRL strive to promote community arts events for all, bridging music, dance, experimental theatre, filmmaking and visual arts. These events are the backbone of a safe and inclusive creative environment and eclectic center of the arts, open to people of all gender, orientation, race, culture, religion, age and ability. We hope onPEARL will be that program which will transform audience experience in our historic Jersey Shore arts community and beyond, offering the spectator immersive, state of the art audio-visuals, and an intimate environment to connect with their favorite artists like never before. Seeing a concert may never be the same.”

“We are so thrilled to help develop this new engaging series. With my experience putting together Writers in the Raw and Wave Gathering, onPEARL is sure to be something special for our music community. We can’t wait to tell our story and watch other artists and speakers tell theirs,” says Brown, who has teamed up with Centrone to create the series.

‘When Gordon asked me if I had any ideas to name the series, and I jokingly said if Bruce is on Broadway, we’ll be on Pearl, so Williams Honor onPEARL it is!” says Richards. “We’re thrilled to get this off the ground, cut the ribbon, and then pass the torch to other artists to continue the series.”

Starting out by doing a very intimate show for thirty people, shortly afterwards, performing their first big show on stage with Bruce Springsteen, they then embarked on a two year radio tour across the country supporting their singles …and ended up as direct opener for newly inducted Rock and Roll Hall of Famers, Bon Jovi, at Madison Square Garden, all the while building a beloved fan base, aptly named the Williams Honor Army.

WH has also toured nationally and shared the stage with some of the format’s biggest stars, Old Dominion, Jessie James Decker, Tim McGraw, Lady A, Natalie Stovall (of Runaway June and current host of The Grand Ole Opry), Eric Paslay, LoCash, Logan Mize, Tony Jackson, John Eddie, among many others.

Their live shows, whether with their full band or acoustic, are always packed with high energy, comedy, fashion and a style that is distinctly G&R, as they are affectionately nicknamed. They also continue to lend their efforts to some of the top national acts in country, pop, and rock, either writing, producing, and/or touring alongside many of today’s well established artists.