The Vogel Presents Sidemen Center Stage: The Musicians Behind the Artist 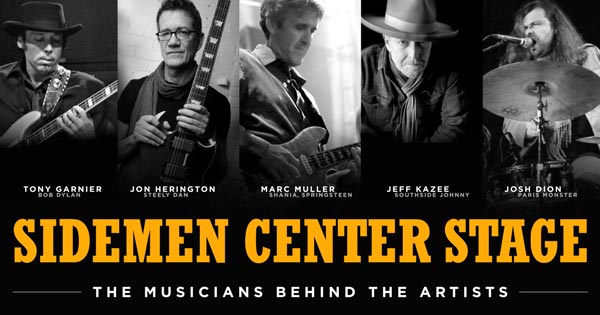 (RED BANK, NJ) -- It takes a certain kind of person to become a professional support musician to the stars. Of course, it takes a high level of musical talent and ability, coupled with a chameleon-like sense to perfectly frame the artist’s music that you are working for. But it also requires the ability to bond with other sidemen, musically and socially, and to be a good hang, whether on stage, studio or on a tour bus.

Marc Muller (Shania Twain, Bruce Springsteen) will welcome some of the top sidemen on the scene today: Jon Herington, Jeff Kazee, Tony Garnier and Josh Dion for Sidemen Center Stage: The Musicians Behind the Artist on Friday, December 3 at 7:30pm. The event takes place at The Vogel, located on the Count Basie Center for the Arts campus in Red Bank.

Done in a “sideman in the round” format, each musician will play some of their own music, share a story, and play a song or two from some of their favorite artists they’ve worked with. The show will end with a spontaneous, no-holds-barred jam session. If you are a fan of music and the people that create it, this show is not to be missed.

Jon Herington is a longtime New York city based guitarist, singer/songwriter, producer and bandleader. He’s been the guitarist of choice with the iconic Steely Dan for both recording and touring since 1999. Jon also tours regularly with unique song stylist Madeleine Peyroux and has previously toured with Donald Fagen, Boz Scaggs, The Dukes of September, Bette Midler, Phoebe Snow, and Bobby Caldwell.

Marc Muller is a veteran touring / recording multi-instrumentalist, who has appeared on albums and in feature films, TV and international tours with Bruce Springsteen, Shania Twain, Tommy Shaw, Van Zant, as well as the Disney Channel, PBS and ABC TV. He is the creative force behind the critically acclaimed Grateful Dead tribute, Dead On Live.

The Sideman will have renowned musician and longtime Bob Dylan bassist Tony Garnier, along with the creative force behind the eclectic power duo project Paris Monster,  drummer Josh Dion, as their “house” rhythm section.

The Count Basie Center for the Arts requires patrons to present one of the following to attend events at Hackensack Meridian Health Theatre, The Vogel or Basie Center Cinemas: Proof of full vaccination or a negative COVID-19 test taken within 72 hours of door time. Patrons aged 12 and under are not required to present test results, but must remain masked during all events. Masks are strongly encouraged for everyone attending the show.  For more information on the Basie's covid protocols, click here.

Note: This Count Basie Center event is being sold to full legal capacity, subject to local, state and/ or federal restrictions in place at the time of the event. If any show needs to be rescheduled and you cannot make the new date, you can request an account credit or refund.