Eagles To Play Shows At Madison Square Garden In August 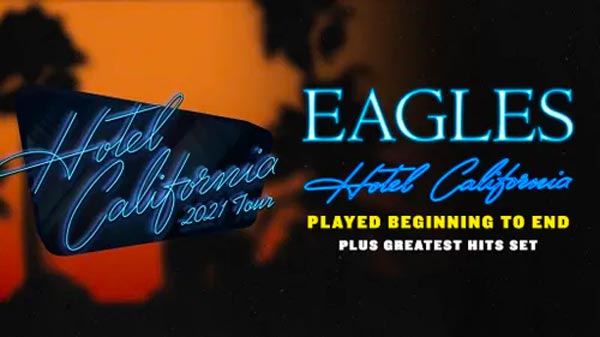 (NEW YORK, NY) -- Eagles – Don Henley, Joe Walsh and Timothy B. Schmit, with Deacon Frey and Vince Gill - will perform two nights at Madison Square Garden.  The "Hotel California" 2021 tour comes to MSG on August 22 and August 24. Commemorating their 1976 album, the concerts will feature a “Hotel California” set accompanied by an orchestra and choir, followed by an additional set of the band’s greatest hits.

"We are pleased to be restarting our 'Hotel California' tour at The Garden. We are looking forward to getting back to the Big Apple and performing for our fans," said the band in a press release.

In today’s faddish, fractured, rock landscape, the Eagles retain an appeal that transcends both generation and genre, cementing the band’s role as enduring musical icons. As the best-selling American band of the ’70s, and one of the top-selling acts of all time, the Eagles have sold more than 150 million albums worldwide, scored six number one albums and topped the singles charts five times. They have won six GRAMMY Awards, were inducted into the Rock & Roll Hall of Fame in 1998, in their first year of eligibility, and received the Kennedy Center Honors in 2016.

All guests will need to be fully vaccinated and provide proof upon entry to the event of having received their second dose of the Pfizer-BioNtech or Moderna COVID-19 vaccine or their single dose of Johnson & Johnson’s Janssen COVID-19 vaccine no later than 14 days before their event date. Exceptions will be made for children under the age of 16, who may provide proof of a negative antigen or PCR COVID-19 test, or full vaccination and may only attend with a fully vaccinated adult. For more information, please visit msg.com/faqs.

Tickets for both shows go on sale tomorrow, June 18 at 10:00am ET via Ticketmaster.com and Ticketmaster Charge by Phone (1-866-858-0008). Prices range from $129 to $750. All tickets are digital and can be accessed and displayed via the Ticketmaster App. All guests should download the Ticketmaster App in advance to facilitate contactless entry.