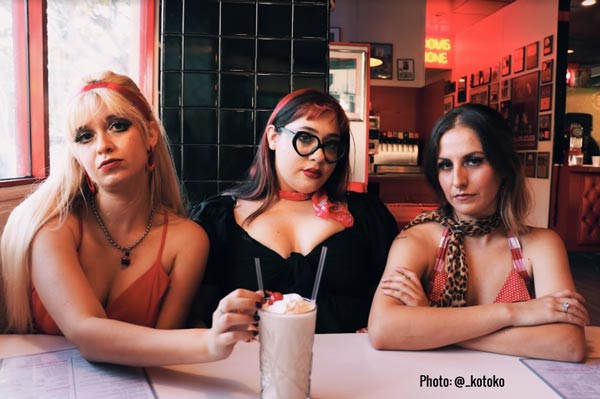 Southern California's The Aquadolls are ringing in the holidays with a new take on The Waitresses holiday classic "Xmas Wrapping." The track was produced by none other than Fat Mike of NOFX and features appearances by Angelo Moore of Fishbone on saxophone and El Jefe of NOFX on trumpet.

Frontwoman Melissa Brooks says, "Every year when the weather starts getting colder (and in California terms meaning we go from blistering hot weather to a breezy 70 degrees) it means it’s time for the holiday season.

"This leads to our not-so-friendly winter companion: seasonal depression. Christmas time can be really difficult to navigate through, especially during a pandemic. The holidays can suck, but with the help of a good pal or two and some rock n roll, hopefully, it can suck a little less!"

"We created a ska/punk-inspired cover of The Waitresses’ 'Xmas Wrapping' with the production help of Fat Mike from NOFX and Jon Graber, with horns from El Hefe of NOFX and Angelo Moore of Fishbone. It’s so exciting for us to collaborate with so many music icons on this and put a new twist on such an underrated and timeless classic. We hope you start a mosh pit to this and this makes your holiday season rock harder than before!"

The Aquadolls formed in La Mirada, CA in January 2012, by Melissa Brooks, the band's lead singer and songwriter. Melissa began recording bedroom demos of her songs and eventually released the album 'We Are Free' in early 2013, followed by the LP 'Stoked on You' in December 2014.

Following their sophomore album, the trio self-released the single "Suck on This" in summer 2019, followed by their 2020 viral cover of Lash's "Take Me Away" (a track made famous via its inclusion in the 2003 Lindsay Lohan-starring Disney film 'Freaky Friday'). The band's latest single 'Disappearing Girl' is out now on Enci Records.

The Aquadolls have toured with the likes of Kate Nash, Jenny Lewis, La Sera and others.