About five years ago, pianist Ramsey Lewis and his wife, Janet, were at Chicago’s O’Hare International Airport, preparing to fly out for a concert tour. “My wife asked an attendant what gate the flight was leaving from, and when she saw how far it was, she asked, ‘Can you get a wheelchair for my husband?’ That’s when I started thinking it was time to retire.”

Lewis will turn 86 on May 27. Despite his “official” retirement, he has continued to play the piano every day at home, and in April 2020, shortly after live performances were ended by the pandemic, he began streaming one-hour concerts, called Saturday Salon, at 1 p.m. Central Time, on the last Saturday of the month. Each month has a different theme.

On April 24, he will be playing songs from his chart-topping 1965 Argo album, The In Crowd. The title tune, written by Billy Page, was a Top 40 hit for vocalist Dobie Gray. Lewis’ version sold more than one million copies as a single, and the album, which reached Number 1 on Billboard’s Rhythm & Blues chart and Number 2 on its Top 200 Albums chart, won a Grammy Award for Best Instrumental Jazz Performance by an Individual or Group.

Lewis, bassist Eldee Young, and drummer Redd Holt were sitting in a coffee shop in Washington, DC, trying to come up with one more song for the album they were going to record live at Washington’s Bohemian Caverns. “The waitress came over,” he recalled, “and said, ‘There’s a nice song by Dobie Gray that everyone likes. We have it on our jukebox.’ So, she went over and played this song. And, we said, ‘Yea, that’s perfect.’ To us, it was just a fun song, not the meat cut.”

The song was enthusiastically received at the Bohemian Caverns, but it was later during a nightclub date in Detroit, that Lewis realized the enormity of its popularity. “Phil Church of Argo Records told me, ‘I think you guys have a hit. You know that song, The In Crowd? We’re going to put a single out.” In January 1966, after The Ramsey Lewis Trio appeared at Chicago’s London House, Time Magazine described “the lines of fans snaking around the block,” adding that, “Pianist Ramsey Lewis, 30, is not only In, he is the hottest jazz artist going. And, amazingly enough, he is going strongest in the rock-‘n-roll market . . . The younger generation, it seems, has adopted Lewis as the purveyor of a new and wondrous sound.”

Lewis’ Saturday Salon series covers a broad spectrum of musical styles. On February 27, he presented “West Side Story and Other Stories of Love.” Those “Other Stories” included affectionate medleys of a wide range of American Songbook favorites including Victor Young’s “My Foolish Heart”, Harry Warren’s “The More I See You”, Hoagy Carmichael’s “The Nearness of You”, and Cole Porter’s “So In Love”. Asked about his favorite composers, Lewis responded, “I go by songs rather than composers -- songs that I love. I have a list of three or four hundred songs I dearly love, and I pick songs depending on the theme.”

The idea for Saturday Salon was born one day while Lewis was playing the piano. “I was trying to remember a Russ Freeman song that was on a Chet Baker album,” he said. “It came back, and I played the whole thing through. My wife heard me playing that song, “The Wind”. She recorded it on her phone, and, little did I know, she sent it to my manager. They talked to me and asked, ‘Would you be open to doing a show once a month? You can do it from your living room on your piano.’” (The album was the 1954 Columbia Records release, Chet Baker & Strings).

In 1974, Lewis moved from the acoustic rock ‘n roll of The In Crowd to an electrified R&B-flavored Columbia album called Sun Goddess. It was a crossover hit, reaching Number 20 on the Billboard Pop Album chart and Number 1 on the magazine’s Black and Jazz charts. His collaborator on the album was Maurice White, who had founded Earth, Wind & Fire five years earlier. White, Lewis recalled, “was a very quiet gentleman, almost bashful, sitting behind those drums. But, he gave us a lot of energy. The way he had the cymbals set up, the audience could hardly see him when he played solo. One day, he brought in a thumb piano, a Kalimba. I said, ‘You got to get up from the drums and play the Kalimba so people can see it.’ He did, and, wow, the reaction he got!”

Lewis and the late vocalist Nancy Wilson made three albums together -- The Two of Us (Columbia: 1984), Meant to Be (Narada Jazz: 2001), and Simple Pleasures (Blue Note: 2006).  “Nancy Wilson,” he said, “was a natural performer. John Levy, my manager, also managed Nancy. He saw something in her that told him she would be a big star, and John got the idea we should do something together; and it went so well. She had big ears. I would take certain liberties as a jazz artist, but whenever I’d take a liberty, she would ad lib, reflecting the fact that she knew what I was doing. I was very sad the day she passed.”

After pianist Billy Taylor’s death in December 2010, Taylor’s wife asked Lewis to speak at a special memorial service for him a month later in New York. “Taylor,” said Lewis, “was a special guy and a special musician. I was a guest on one of his TV shows. He had two pianos, and he would invite you to be the second piano. We had such fun that we thought we should do something else together. We did a concert in a park in the Midwest. The concert was free, so there were thousands of people to see these two pianos. The reception was great, so that told us maybe we should take this show on the road. We put together a nice show of about 10 to 15 dates a year. I could write a book about Billy and our relationship. I’ll never forget Billy Taylor.”

The two NEA Jazz Masters made one album together, We Meet Again (Columbia: 1989). Reviewing it in January 1990, the Chicago Tribune’s Howard Reich wrote, “Lewis and Taylor work together elegantly, producing a sound that`s big and brassy without being percussive. And though the playing is polished and refined, it never loses the loose, breezy feel of the best jazz improvisation.”

In 2006, Lewis hosted his own television show, Legends of Jazz, produced by Chicago public TV station, WTTW, and aired on PBS stations across the country. Lewis interviewed guest artists who also performed, and he would strive to “not get musicians from the same side of the street.” One typical episode had alto saxophonists David Sanborn and Phil Woods together -- the saxophone star of the contemporary fusion scene with the veteran protégé of Charlie Parker. Other pairings combined Tony Bennett with Chick Corea and Ray Barretto and Benny Golson with Chris Potter and Marcus Strickland. “It worked,” Lewis said. “It was great getting a conversation going between people who knew of each other but didn’t know each other.”

Tickets for the Ramsey Lewis Saturday Salon series are $20 per show and can be purchased online at StageIt.com/RamseyLewis. A portion of the proceeds are donated to the Jazz Foundation of America. 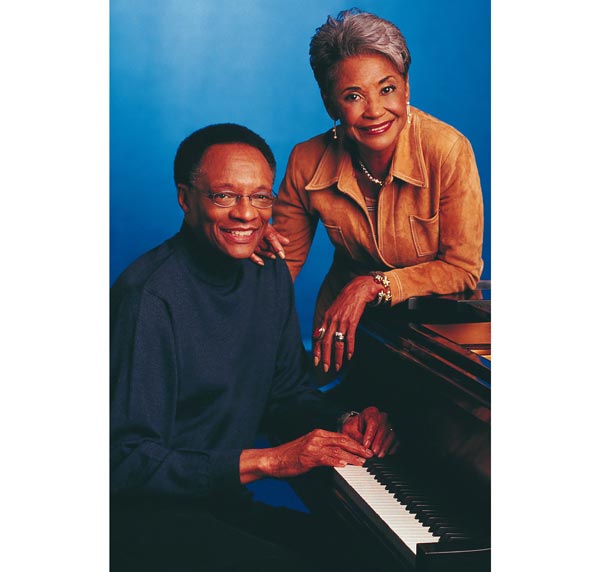