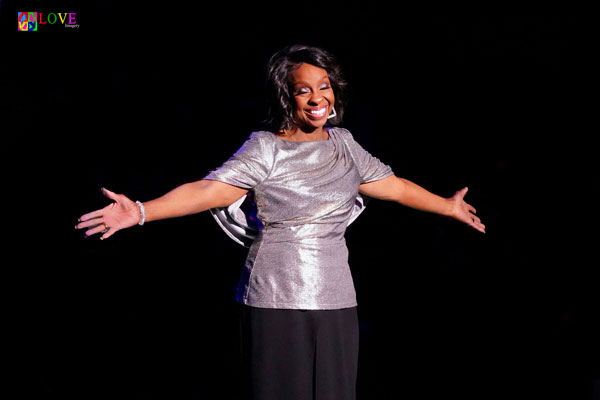 Inside STNJ in New Brunswick, NJ this Saturday, November 6, 2021, one of the most celebrated singers in pop music history, “The Empress of Soul,” Gladys Knight, is just about to begin a live performance of classic hits representing her long and storied musical career.

Knight, 77, was born in Atlanta, GA, the daughter of a postal worker. She first achieved fame at the age of seven winning Ted Mack’s Original Amateur Hour television competition. Soon after, she formed a music group with several relatives called the Pips, a quartet they named after a cousin, James “Pip” Woods.

With her brother, Merald “Bubba” Knight, and two other cousins, Edward Patten and William Guest, Gladys Knight and the Pips went on to record numerous hits during the 1960s and ’70s. In 1996, the group became inducted into the Rock and Roll Hall of Fame. 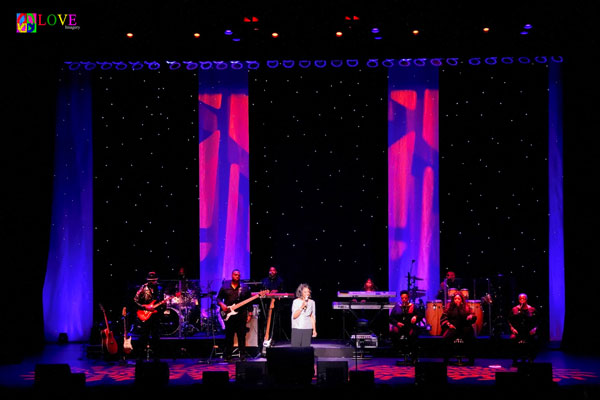 Knight has also had success as a solo artist, performing with Dionne Warwick, Stevie Wonder, and Elton John on the Grammy-winning “That’s What Friends Are For,” in addition to other hits. She appeared on television in the 1980s and ’90s with roles on A Different World, The Jeffersons, Benson, and The Jamie Foxx Show, and more recently on 30 Rock, The First Family, and Dancing with the Stars. In 2019, Knight performed as the “Bee” on The Masked Singer, and also sang the national anthem at Super Bowl LIII.

Inside the newly refurbished STNJ auditorium, lavender and ice blue lights illuminate the stage as members of the audience chat amongst themselves, happy to be out and about on this chilly November evening. When STNJ president and CEO Sarah Chaplin greets the crowd declaring, “I’m delighted to welcome you back to live theater!” the crowd cheers and applauds. Chaplin thanks all of the venue’s supporters and reminds the audience that STNJ is celebrating its 100th year this season with a number of “amazing artists doing amazing shows.”

The lights dim and the members of Gladys Knight’s band take their places on stage and begin to play as three soulful backup singers sing in three-part harmony. The crowd stands and cheers when Knight enters and takes her place in the spotlight center stage. Looking stunning in a striking silver top with elegant black palazzo pants, Knight’s warm, full alto fills the theater with love as she sings “Love Overboard.” 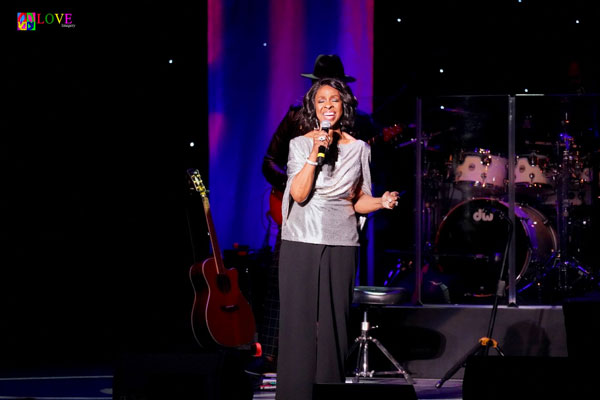 Knight’s bass player comes over to dance next to Gladys and she smiles as she sings, “Love overboard/My love’s in need of help/Love overboard/I sure can’t help myself.”

Colored lights flash to a funky guitar solo on this upbeat dance number which elicits cheers at the end and prompts audience members to enthusiastically shout out their approval.

The crowd starts grooving when they hear the up-tempo opening strains of Gladys Knight and the Pips’ 1969 Top 20 hit, “The Nitty Gritty,” where Knight sings up a storm. Then, she and the musicians segue directly into a pulsating version of The Jacksons’ 1979 Top Ten smash, “Shake Your Body (Down to the Ground).”

Following enthusiastic applause, Knight says, “Tonight, we’re going to do a little bit of this and a little bit of that,” before pointing out, “This was our very first hit record.” Audience members joyfully sing along on “Every Beat of My Heart” where Knight showcases her powerful voice, holding out an especially long note and bending it as the crowd goes wild. 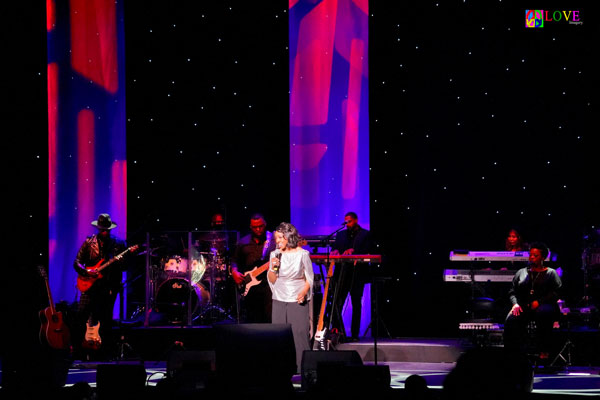 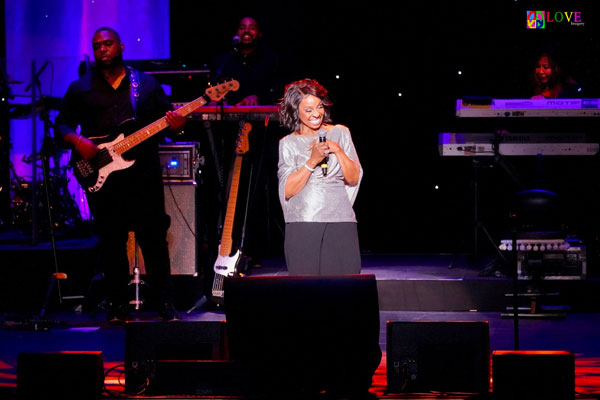 After acknowledging world events these days and declaring, “This is a crazy time!” Knight reveals, “This is another favorite, which talks about how we live and love — and it’s real.” Looking beautiful against a star-studded backdrop illuminated with colored lights, Knight sings the sweet ballad, “In This Life.” A wailing guitar solo cries out under Gladys’s soulful vocal which elicits audience cheers and applause

Knight reminisces about one of her favorite musicians, Curtis Mayfield, before performing Mayfield’s “Make Yours a Happy Home,” an upbeat R&B tune from the 1974 film, Claudine. Playing off the backup singers who sway and do synchronized hand motions as they sing, Knight dances slowly as she croons, accompanied by her talented band. Knight continues her tribute to Mayfield by performing another song from the Claudine film soundtrack — a soft and heartfelt rendition of Mayfield’s “The Makings of You.”

Knight’s next offering is a dynamic interpretation of her 1974 Top 5 hit, “I’ve Got to Use My Imagination.” 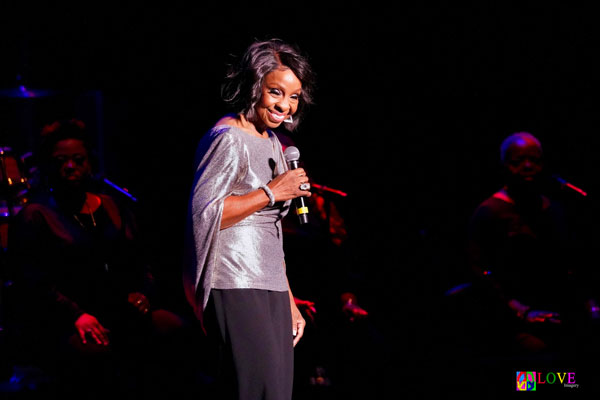 Her world-renown alto rings out through the STNJ auditorium and lights swirl as she sings, “I’ve really got to use my imagination/To think of good reasons/To keep on keepin’ on.” Thrilling the crowd as she dances to the driving bass and drums, Knight’s guitarist comes forward for a wailing solo as Gladys sings, “Get down! Get down!” to cheers from the enthusiastic crowd.

Talking about Bonnie Raitt, Knight reveals, “I love this lady and her music,” before giving a tour de force performance of Raitt’s “I Can’t Make You Love Me,” making the song her own with soul and passion. She follows up with an outstanding cover version of Kris Kristofferson’s “Help Me Make It Through the Night.” On her sensual and soulful rendition of this country tune, Knight brings the lyrics the life with her expert use of dynamics and emotion. 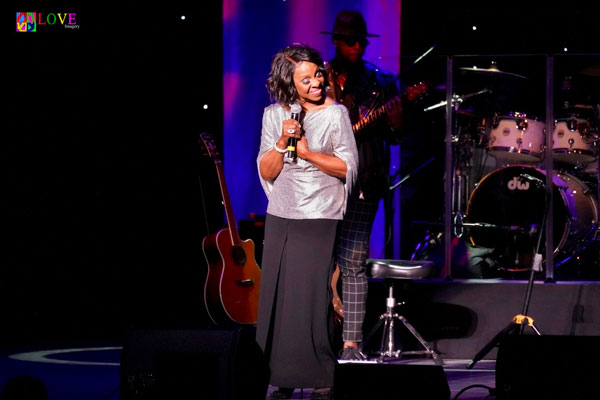 Moving on to her 1967 Motown smash, “I Heard It Through the Grapevine,” Knight’s outstanding lead vocal blends perfectly with her trio of back-up singers. Getting the crowd involved, Knight instructs, “Repeat after me” and the audience echo-sings and claps along with her. Improvising on the tune, Knight encourages the audience to join in with her and the band before the number ends in enthusiastic cheers. 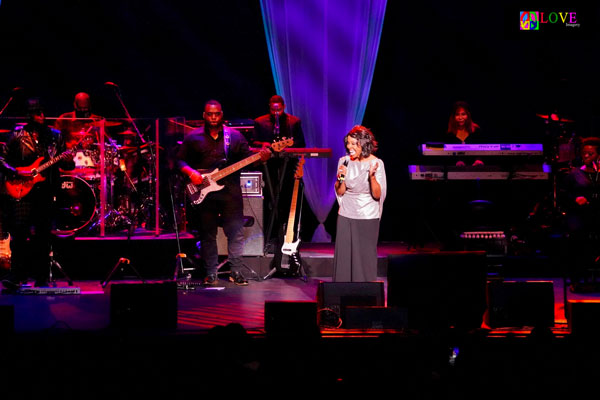 Lights dance both on the stage and on the ceiling for Knight’s sumptuous version of her 1973 Top Ten Motown hit, “Neither One of Us (Wants to be the First to Say Goodbye).” Gladys sings from her heart on this song, the crowd applauding several times during the performance before Knight holds a note out that brings audience members to their feet.

Gladys bows graciously as a fan calls out, “We love you!” and Knight responds, “I love you, too, and that’s not just rhetoric.” The conversation continues with the audience member asking, “Where are the Pips?” and Knight instantly replying, “I don’t know. Can you help me find them?” before adding, “You really liked them, didn’t you?” to which the fan acknowledges, “Yes, and I love you, Gladys! ” 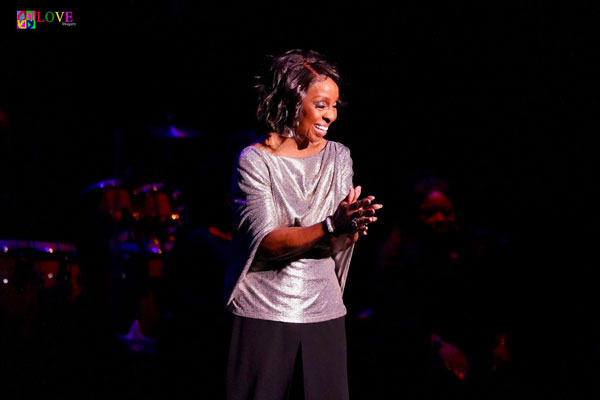 Taking a seat center stage as she sings, Knight gives one of the highlight performances of the evening with her rendition of her 1974 recording, “The Way We Were.” Her voice starts off soft and sultry, crying and pleading, as the audience sways to the beautiful Alan and Marilyn Bergman lyrics. Before she’s even finished, music lovers are on their feet in recognition of Knight’s master class in vocal performance.

Gladys takes the entire STNJ congregation to church on a medley of worship songs by The Winans. A beautiful rolling piano part underscores Knight as she sings “Everything You Touch Is a Song.” Next, she and the band segue into “Stand” which features a duet with one of Knight’s backup singers, Alexis. The soulful voices of the two woman inspire audience members to stand and raise their hands in affirmation of the music and message coming from the stage.

Gladys thanks the audience before blowing kisses from the stage and announcing, “I got to go get my train now.” 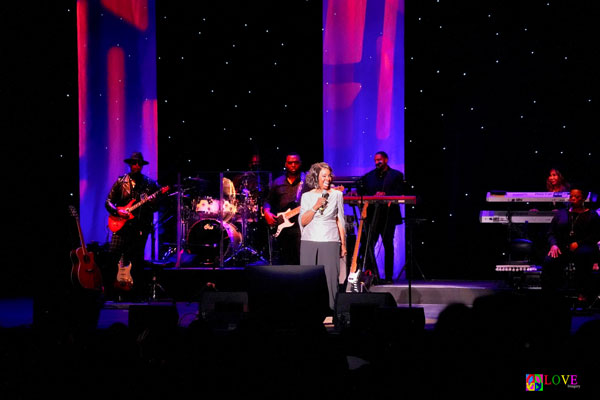 At this point, she nearly burns down the house with an upbeat rendition of her 1973 chart-topping Grammy-winner, “Midnight Train to Georgia.” The backup singers’ synchronized train hand motions add to the energy of the performance as Knight moves across the stage, and audience members dance at their seats as they sing, “Oh, he’s leaving/(Leaving)/On the midnight train to Georgia/(Leaving on the midnight train),” while partying to the music.

Knight thanks the audience for supporting her, throws kisses, and accepts a gift from a fan seated in the front row. Crooning, “I got to go/I got to go,” the band vamps as Gladys says, “Drive carefully. We love you” and exits the stage while audience members stand and cheer. 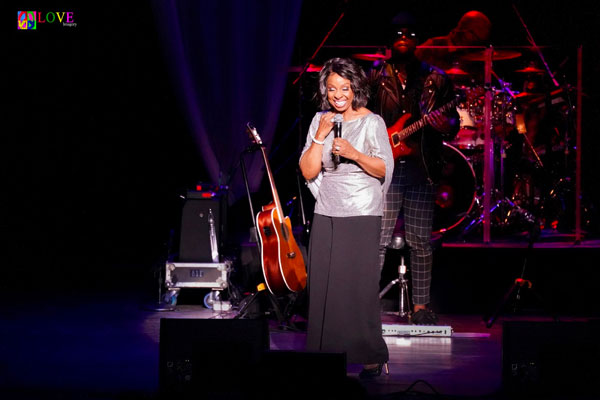 As the curtain closes and we make our way out of the State Theatre auditorium, we chat with several music lovers in the house who share their thoughts on tonight’s performance with us.

Declares Felicia from Ewing, “I loved tonight’s show! Gladys is amazing, and it was great seeing her in this beautiful theater.” Carol from South Brunswick agrees, calling Knight “Incredible!” explaining, “Her voice is so strong, she’s so entertaining, and I just I loved her stories.”

Whereas Janet from New York calls Knight’s performance “Awesome,” noting, “She really delivered!” Marcia from Piscataway exclaims, “We loved her! She looks and sounds wonderful, and I love that she did so many of her hits.”

Barbara from Manalapan asserts, “Gladys Knight was phenomenal! Her voice is so clear!” before adding, “and I loved seeing her in this historic theater. It’s old-fashioned, but so beautiful! It was a such a pleasurable experience coming here.” 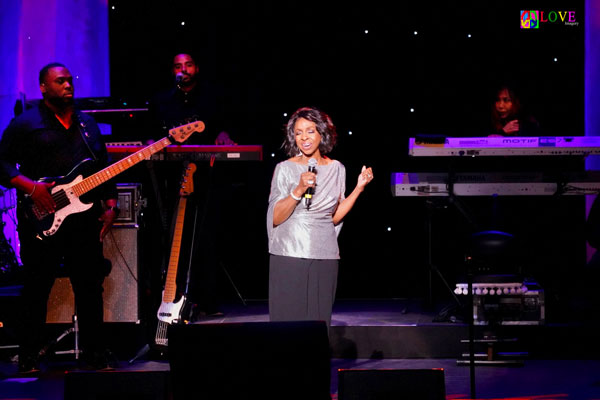 Ernest from New York City comments, “Gladys Knight sounded wonderful tonight! God has blessed and smiled on her,” acknowledging, “I’ve been listening to her since I was a child. Imagine being 77 years old and still being able to sing like that!”

Diane, who tells us she came all the way from Atlanta, GA to see tonight’s show reveals, “This was my first time seeing Gladys Knight. I’m a real fan — I love her!” before noting, “And this is such a beautiful theater — it was really worth the trip!”

Lastly, we chat with two friends, Keisha from Brooklyn, NY and Shinita from Princeton. Declares Keisha, “Gladys Knight was really excellent! She turned it out and gave us a show. We just love her!” Shinita agrees, adding, “We once followed her to Las Vegas to see her, and as usual, tonight in New Jersey she was outstanding,” before concluding, “She always puts on a great show! We loved it, loved it, loved it!” 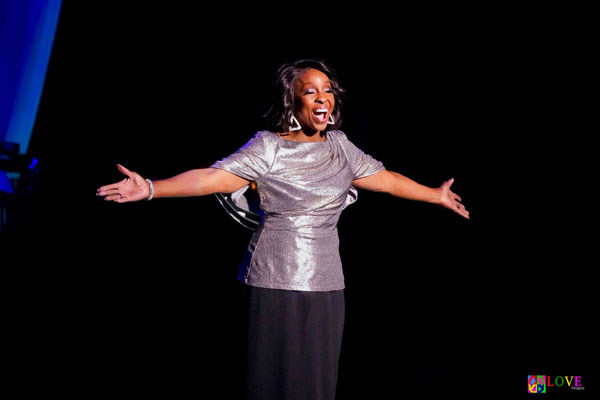 To learn more about Gladys Knight, please go to gladysknight.com. For information on upcoming performances at State Theatre New Jersey — including Summer: The Donna Summer Musical on Nov. 26–28, Air Supply on Feb. 4, 2022, and The Righteous Brothers on Feb. 19, 2022 — please click on stnj.org. 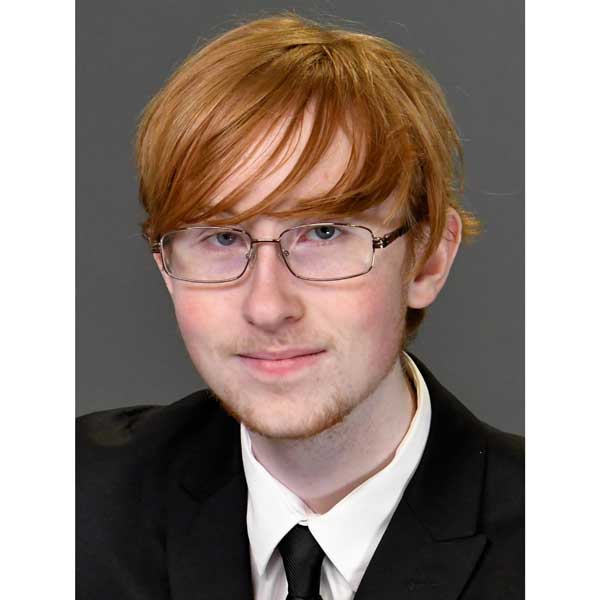