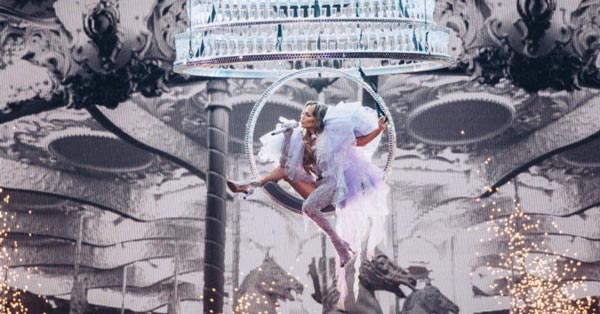 Jennifer Lopez and Live Nation Entertainment have announced an exclusive multi-year touring partnership. Live Nation will produce and promote Jennifer Lopez concert events around the world including her next outing.

“Jennifer Lopez has given fans spectacular live performances for decades through sold out tour dates and her Las Vegas residencies,” said Brad Wavra, Senior Vice President Touring, Live Nation. “The demand to see Jennifer live is only growing and Live Nation is proud to be partnering with such a worldwide phenomenon for years to come.“

Most recently, Lopez gave a record breaking and critically applauded Super Bowl halftime performance at the Hard Rock Stadium in Miami.  In 2019, the multi-hyphenate talent plotted her globally sold out and critically-acclaimed It’s My Party Tour. Produced by Live Nation, the tour featured a nonstop party mix of Jennifer’s new and classic anthems, showstopping choreography and dancers, dazzling wardrobe, jaw-dropping technology and set design, and all of the glamour and wow-factor fans have come to expect of Jenny from the Block.

Lopez can next be seen in Universal’s feature film Marry Me, co-starring Owen Wilson and Maluma. Set in the culture of pop music, MARRY ME celebrates the unlikely romance between a pop star and a fan, giving each a glimpse into the other’s world. In addition to producing and starring in the film, Lopez also performs a collection of new, original songs.

Jennifer Lopez is an award-winning actress, producer, singer, and entertainer who has established herself in music, film, and television and is one of the most influential female artists in history. As a recording and touring artist, she has sold over 75 million records and most recently wrapped her global sold out It’s My Party tour and completed a record-breaking performance at the Pepsi Super Bowl Halftime Show. As an actress, Lopez has a cumulative worldwide box-office gross of over $3 billion. As an artist, fashion icon, entrepreneur, and a philanthropist, Jennifer Lopez has been named to the TIME 100 list, Forbes’ “Most Powerful Celebrity”, and People Magazine’s first “Most Beautiful Woman in the World”, in addition to receiving the MTV Video Vanguard Award and two Golden Globe nominations for her critically acclaimed roles in the box office hits Hustlers and Selena. To this day, Lopez remains the only female artist to ever have a #1 album and #1 movie at the box office at the same time. Lopez can be seen next starring in the upcoming feature film Marry Me, alongside Owen Wilson and Maluma. With a career spanning over two decades at the top, Jennifer Lopez is cemented in history as a global icon and the ultimate multihyphenate.