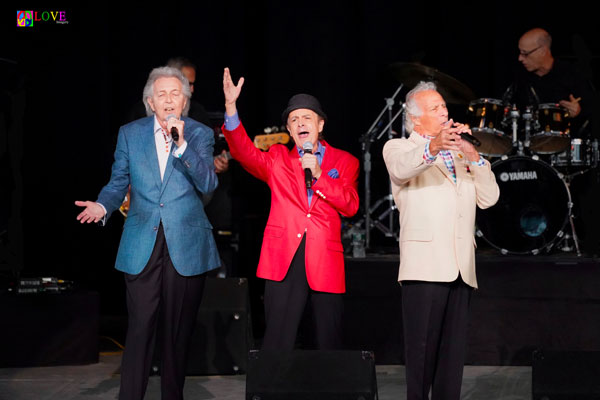 Even though it’s raining outside the PNC Bank Arts Center in Holmdel, NJ this Tuesday, September 28, 2021 afternoon, the weather hasn’t stopped hundreds of intrepid music lovers from lining up for a free concert. Sponsored by the Garden State Arts Foundation, the show stars Jay Siegel’s Tokens and The Archies’ Ron Dante.

Inside the spacious PNC Bank Arts Center amphitheater, Garden State Arts Foundation VP Ron Gravino greets the crowd on this drizzly Fall afternoon, suggesting, “the sun is coming out now,” and is received with avid applause. After a brief explanation about the Garden State Arts Foundation and its main sponsors — Live Nation Entertainment, PNC Bank, and MusicRadio 77-WABC — he introduces the first act of today’s event, Ron Dante. 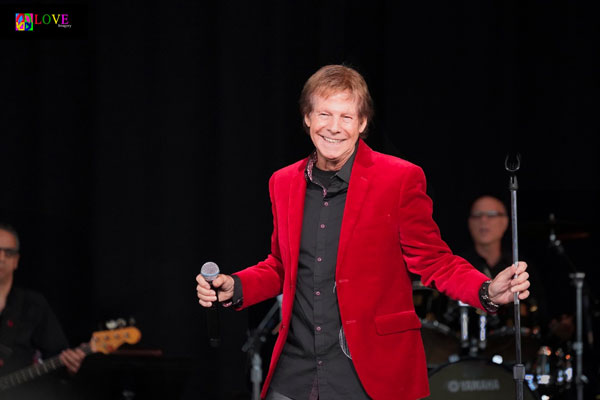 Backed by members of The Coda Band — Dennis DiBrizzi on keyboards, Joe DeAngelis on guitar, Paul Page on bass, Pete Mastropaulo on drums, and Mary Beth Ryan-Mastropaulo on saxophone — Dante makes his entrance singing the The Strangeloves’ 1965 hit, “I Want Candy.” 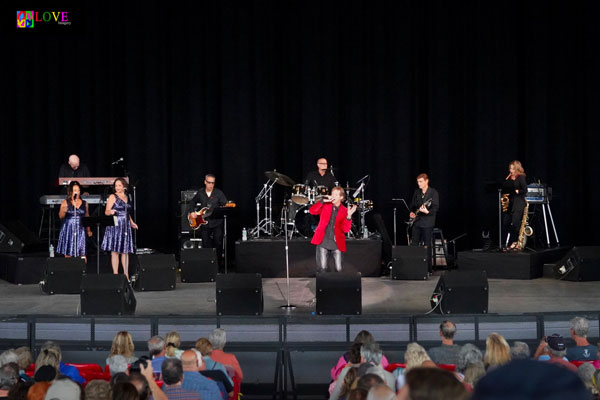 This upbeat opener features Dante’s strong vocal supported by background singers Deanna Caroll and Susan Marten along with Mary Beth Ryan-Mastropaulo playing arpeggios up and down her saxophone as Dante encourages the audience to sing along on the infectious “I want candy” lyric. 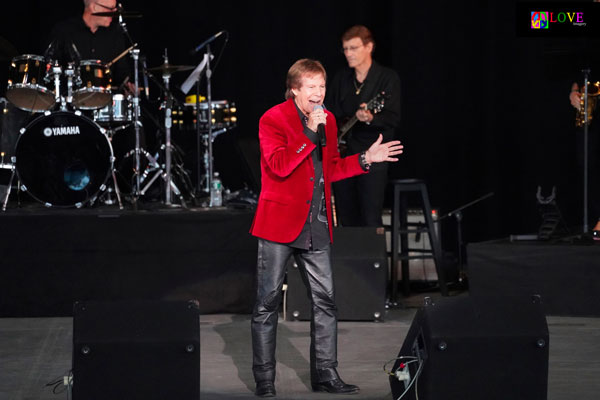 Explaining that before he become a member of The Archies, Dante auditioned for The Monkees but lost the role to Davy Jones. At this point, Dante presents his tribute to The Monkees with his rendition of “I’m a Believer.” Caroll and Marten dance and sway to the irresistible beat as DiBrizzi’s keyboard swirls and Dante’s clear voice makes believers out of the audience. 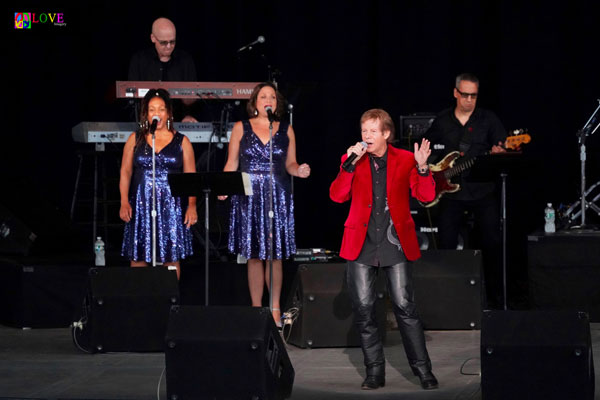 Revealing that one of his favorite groups of the ’60s was The Dave Clark Five, Dante performs the British group’s “Glad All Over.” The bubblegum sound of this 1963 hit has audience members bopping their heads before Dante cues the crowd to clap in rhythm on the infectious “Glad all over” chorus. He follows up with a million-selling 1969 hit he had with The Archies, “Jingle Jangle,” featuring expert bass playing by Paul Page. After explaining that he’s currently been touring on the Happy Together Tour as lead singer of The Turtles, Dante performs The Turtles’ 1967 hit, “She’d Rather Be With Me.” 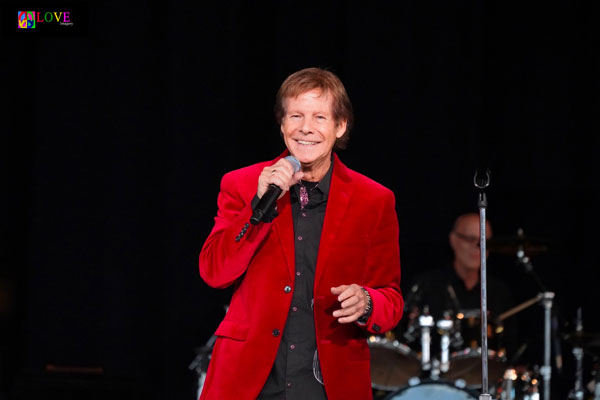 Members of the audience clap along on this happy-go-lucky song and gentlemen in the audience shake their fists in the air to the rhythm of this crowd favorite. 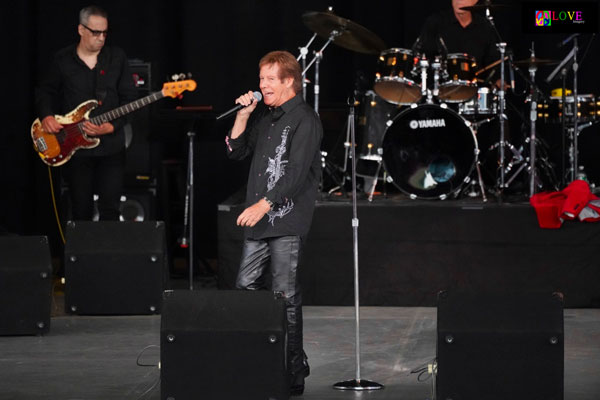 Sweet and bubbly, the tune has audience members’ toes tapping and voices ringing out on this classic bubblegum tune.

Drummer Pete Mastropaulo counts off the introduction to The Young Rascals’ 1966 classic, “Good Lovin.’” Joe DeAngelis rocks steady on guitar backed by keyboards, bass, and driving drums, and background singers Caroll and Marten dance with Dante during DeBrizzi’s swirling keyboard solo before the audience reacts with cheers and applause.

Dante concludes his set with another Turtles hit, 1967’s “Happy Together,” which has the crowd happily singing along before standing and applauding as Dante takes a bow and exits the stage. 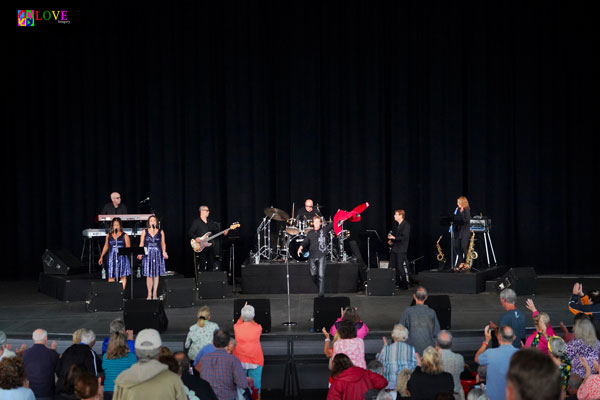 During intermission, we chat with several members of the audience including Judy from Edison who says, “I never saw Ron Dante before, but he was great! I knew all the songs he sang and they made me feel like a teenager again.” Adding, “He really got the audience going — I could hear everyone singing along,” Judy continues by exclaiming, “His set was just great, and I loved watching all the men in the audience shaking their fists in the air — they were really into it!”

Larry from Princeton agrees, stating, “Ron Dante was great! I loved his set; I knew all the songs,” explaining, “I go to a lot of shows, and I especially enjoyed this one, particularly when he did ‘Sugar Sugar,’ which is my favorite song of all.” 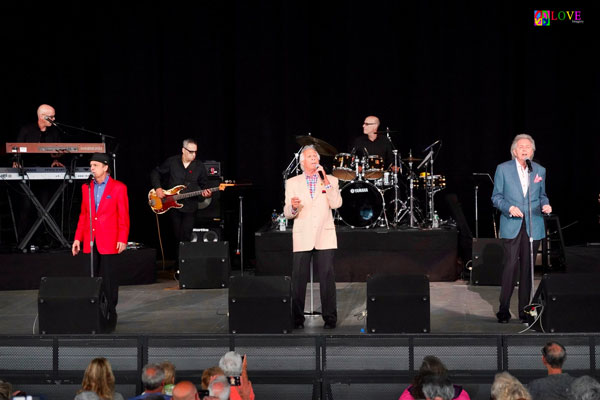 Siegel immediately gets the crowd clapping along as the trio sings the doo-wop intro to their 1956 recording, “Tonight I Fell In Love.” Siegel’s clear tenor soars above the crowd as the sun breaks through the clouds and the audience claps and cheers for this upbeat opener.

Announcing, “We get a lot of requests for the ‘B side’ of ‘Tonight I Fell In Love’” — explaining, “A lot of kids don’t even know what a record is, let alone the ‘B side’ of a record” — Siegel and The Tokens perform “I’ll Always Love You,” a doo-wop ballad featuring Siegel’s sonorous lead vocal.

Revealing, “In the ’60s when the British Invasion came, it was almost impossible to get an American record out,” Siegel prepares to sing one of The Tokens’ best-loved songs from the era when his musical director, Dennis DeBrizzi, comes downstage with his iPad to remind Siegel of The Tokens’ hit, “Portrait of My Love,” at which point Siegel jokes, “I hope I remember this one!” 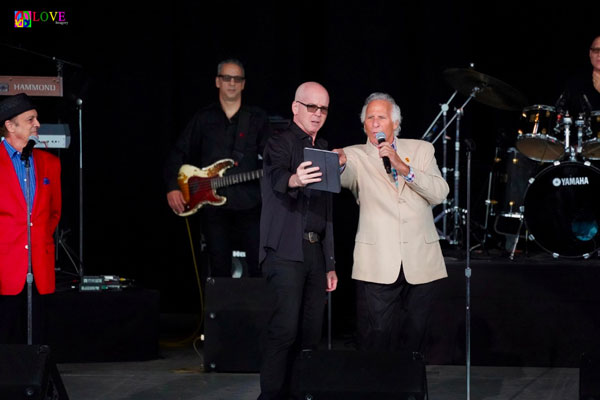 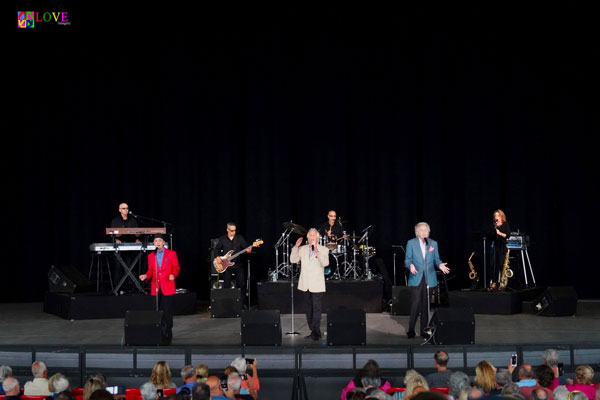 Kurt “Frenchy” Yahjian handles the lead on the Motown classic, “My Girl.” As his colleagues back him in pitch-perfect harmony, PNC Bank Arts Center employees sway with their arms overhead, back and forth, bringing a smile to those in the crowd, and Yahjian gets the audience singing along on the song’s infamous “Hey, hey, hey” lyric. 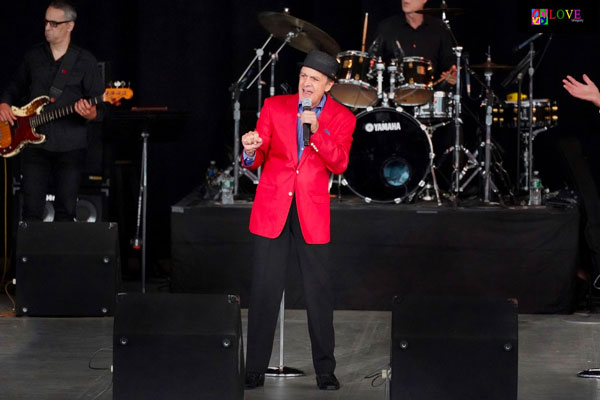 Siegel formally introduces the audience to Yahjian, who, as he explains, hails from New Jersey. According to Siegel, “Frenchy” did not only perform in the original Broadway cast of Jesus Christ Superstar and appear in the movie, Hair, but also sang with Cyndi Lauper, John Lennon, and Carly Simon. Yahjian’s powerful voice and emotional interpretation of Jay and the Americans’ “She Cried” tugs at the crowd’s heartstrings as The Tokens’ “sha-la-la” backup vocal harmonies accentuate Yahjian’s soulful lead. 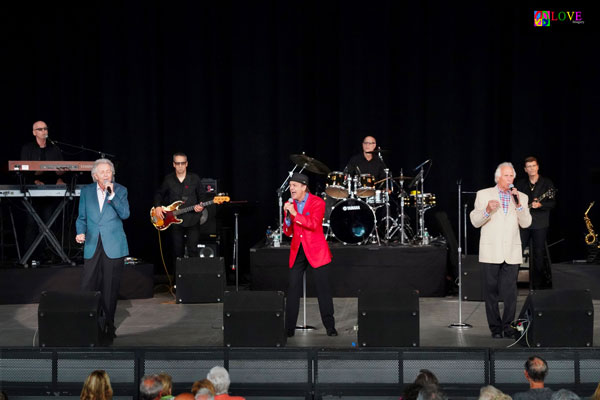 After talking about how he became a record producer and discovered groups like The Chiffons and The Happenings, Siegel and The Tokens perform an up-tempo rendition of The Happenings’ 1966 hit, “See You In September” and follow up with their version of The Chiffons’ 1963 smash, “One Fine Day.” On this number, Mary Beth Ryan-Mastropaulis comes downstage to play tenor alongside Siegel to avid applause. 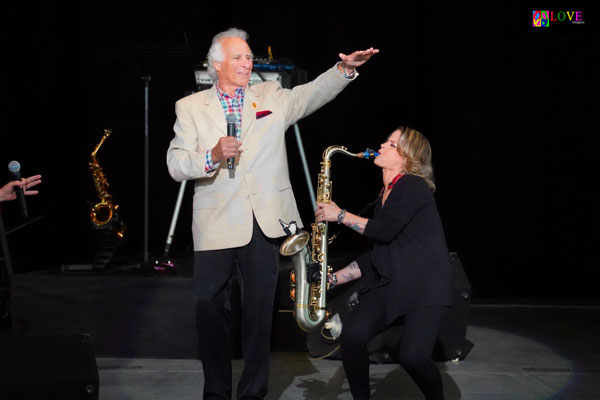 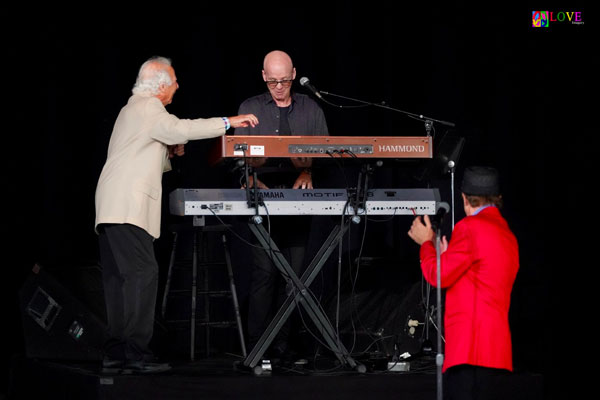 Siegel takes a moment to introduces the audience to a celebrity in the audience — Vito Picone, the lead singer of The Elegants who had a #1 hit with “Little Star” — before announcing, “This is our favorite part of the show: the love songs from the 1950s and ‘60s.” Here, the group performs a medley of The Rays’ “Silhouettes,” The Penguins’ “Earth Angel,” Sam Cooke’s “You Send Me,” Robert and Johnny’s “We Belong Together,” Bobby Vinton’s “Over the Mountain, Across the Sea,” and Don and Juan’s “What’s Your Name?” With the audience happily singing along, Siegel stops the music near the conclusion of the medley to joke, “You don’t remember where you parked the car, but you remember all the words to these songs?” before ending with a flourish.

Music lovers in the crowd sing along and clap as Yahjian sings lead on Dion’s “The Wanderer.” Ryan-Mastropaulo’s tenor sax solo brings cheers from the crowd before Siegel and the audience enjoy a Joe DeAngelis guitar solo. 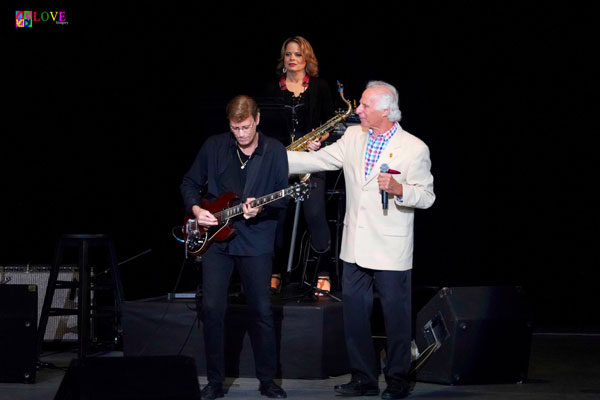 Dedicating the trio’s next song to members of the military and their families, Siegel sings lead on the poignant, “Please Write,” a song which was originally written during the Vietnam War.

Yahjian thanks the audience for coming out and formally introduces Jay Siegel, revealing that Jay started The Tokens with Neil Sedaka before the group went on to produce such hits by Tony Orlando as “Candida,” “Knock Three Times,” and “Tie a Yellow Ribbon ‘Round the Old Oak Tree.”

Here, Siegel performs a highlight number of the afternoon when he sings The Tokens’ biggest hit “in the original key.” His world-famous falsetto floats out over the audience in a wave of nostalgia as he croons “The Lion Sleeps Tonight,” sounding just as young as he did on the group’s original 1961 recording. 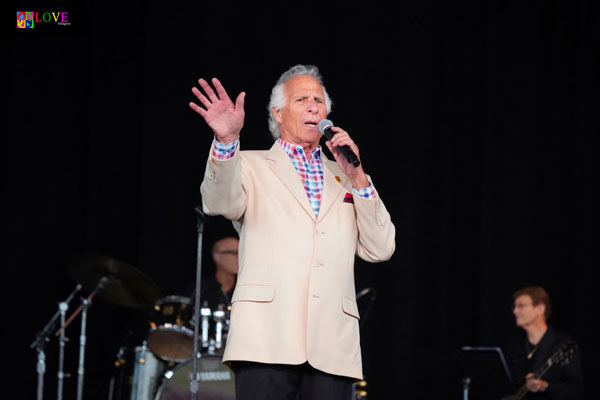 Audience members stand and cheer, and Siegel and the Tokens respond with a brief encore of “The Lion Sleeps Tonight” where they invite the audience to join in on the well-known “Wemoweh” lyric until the song comes to a happy conclusion.

As we make our way out of the PNC Bank amphitheater, we catch up with Judy from Edison who comments, “Jay Siegel’s voice was amazing! It never changes — he really has a great instrument.” We also reconnect with Larry from Princeton who remarks, “I loved ‘The Lion Sleeps Tonight.’ That song just sticks in your head from beginning to end!”

We additionally chat with Ann Marie from Lavallette, who calls today’s concert, “Great!” and characterizes Jay Siegel’s voice as “very impressive.” Pat from Lavallette agrees, exclaiming, “That he can still do that — wow!” before adding, “And Ron Dante! I can’t believe he’s 75 years old! He looks and sounds great!”

Joyce from Waretown contends, “The Tokens put on a great show!” noting, “Ron Dante was very sweet, and The Coda Band was great, too.” Ralph from Waretown concurs, stating, “We love this music and even enjoy going on Malt Shop Cruises,” explaining, “We’ve met many of the artists and they’re all really nice people.”

Whereas Sissy from Manchester contends, “Today’s show by The Tokens and Ron Dante was great! I’m a real fan — I just love their songs!” Emily from Waretown acknowledges, “I was singing along on all the songs, too,” before concluding, “This show was so great, it just couldn’t have been any better!” 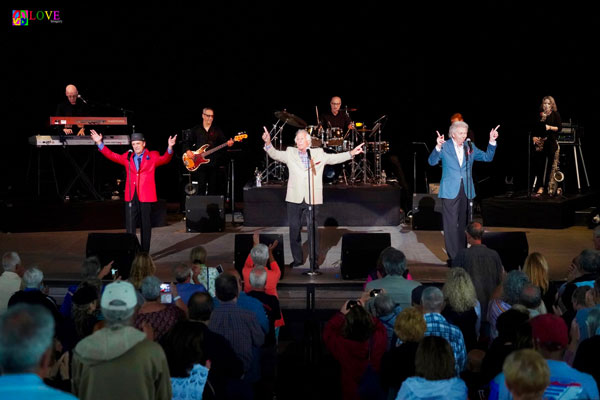 To learn more about The Tokens, please go to jaysiegelstokens.com. For more information on Ron Dante, please click on rondante.com. For further info on The Coda Band, see facebook.com/CodaProductions. To find out more about future Garden State Arts Foundation concerts at the PNC Bank Arts Center, please go to gsafoundation.org.