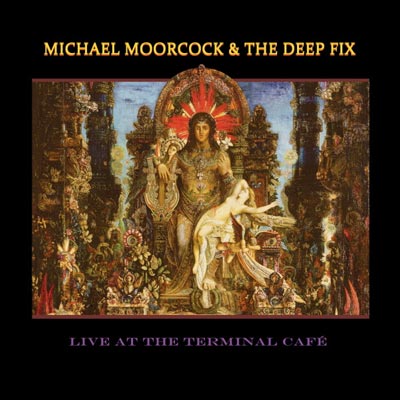 (LOS ANGELES, CA) -- As a novelist and short-story writer, Michael Moorcock stands with one foot planted firmly in reality and the other in fantasy. He has won and been short-listed for almost every award in the sf/fantasy world as well as in the wider literary world. The London Times named him one of the fifty best British writers since 1945.

He scripted ‘The Land That Time Forgot’ film and his Jerry Cornelius novel ‘The Final Programme’ was filmed with Jon Finch. His much-imitated and most famous character, Elric, is currently optioned for TV/movies and the BBC have his Hawkmoon series under option. As a journalist, he has written for The Guardian, The Sunday Times, The Financial Times, The Daily Telegraph, The Washington Post, The Los Angeles Times, The New Statesman, and The Spectator.

Moorcock's music career has been no less laudatory. When performing with Hawkwind, Moorcock won a gold disc for Warrior on the Edge of Time. He has also worked with Blue Öyster Cult, Robert Calvert, Spirits Burning, and developed his own music project dubbed The Deep Fix. Moorcock’s long friendship with the legendary guitarist-bookscout Martin Stone (The Action/Mighty Baby, Savoy Brown, Chilli Willie) culminated in their decision to do an album together. They had grown up in the same town and had similar influences as musicians and readers. Both lived in Paris. The result is the new studio album Live At The Terminal Café.

Moorcock explains the genesis of the album: “Martin contacted Denis Baudrillart, the outstanding French drummer, and bassist/all-rounder Brad Scott and we rented a rehearsal studio. Eventually, the basic tracks were recorded in Montmartre and after that it was up to my friend Sean Orr in Texas to add fiddle and friend Don Falcone in California to perform his magic, adding Catherine Foreman and Jonathan Segel (Camper Van Beethoven), and our first psychedelic Country & Cajun record was ready to go. Like a lot of my music, it’s intended to complement certain books of mine, in this case, the ‘Blood’ trilogy set in Texas and Louisiana where the Earth’s polarities are reversed, with bizarre consequences.”

Moorcock wrote or co-wrote the 11 songs, sings lead vocals on all tracks, and also performed harmonica on two songs on Live At The Terminal Café. The album was mixed and produced by Don Falcone, who runs the music collective Spirits Burning.

Here is the track list for Live At The Terminal Café

1. The Effects Of Entropy

3. The Dream Of Eden

6. The Heat Of The New Orleans Night

The CD is available for purchase here, the vinyl version is available here, and the digital version here. For more on the artist, click here.