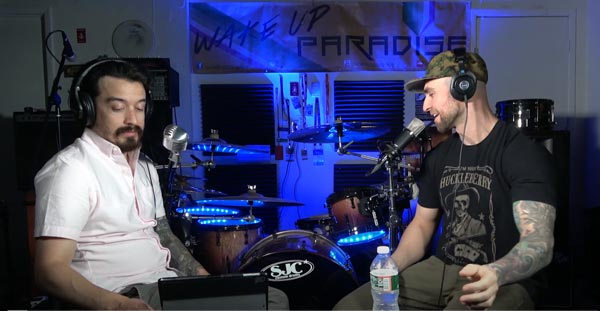 In the latest episode of Good Tunes, a music-centric, comedic podcast hosted by longtime friends and frequent band-mates, Tim Montalvo and Roger Wuy, the guys watch the music video for the title track off their second WUP EP, "Touch the Sky". Touch this guy. Roger's still sour about Tim's "science class" comment. Jolly Ranchers. The proper way to drop a stool. The devil's cabbage. Touch that guy. Future Tim didn't make it home.

Each week, Tim joins Roger in his garage to discuss newly discovered music and reminisce about the old days in the NJ music scene. "Roger and I were getting together every week to play music anyway, so I figured, why not start a podcast?"

Roger's garage, complete with drums, amps, and concert badges, sets the stage for those tuning in to watch. The tone, on the other hand, is set by the obviously real-life best friend vibes between the two co-hosts.

"Roger and I have been friends for about 15 years now, so I like to think that we know each other pretty well. Don't get me wrong, I have opinions he completely disagrees with, and he has interests I could care less about. But, more often than not, we agree on music. We also know what jabs to take at each other, so that's fun too".

Tim & Roger hope to have more guests on the show as they look forward to the future. "We're very excited about growing our audience and also exposing some of our friends' music to new listeners". GOOD TUNES is available on the IDIOT BOX YouTube Channel and on all podcast apps. Follow on Instagram @IdiotboxNJ.