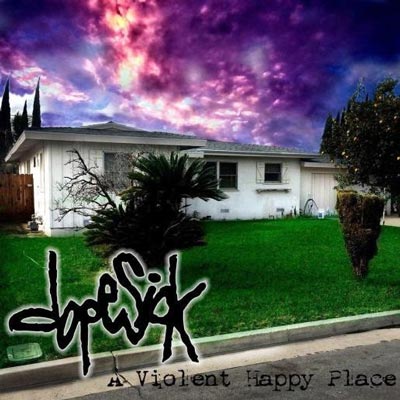 In support of their 2019 album, A Violent Happy Place, DOPESICK has dropped a brand new and visually spectacular music video for “Freaks,” the second single from the debut full-length effort.

Just one of many highlights on an incredibly diverse record, “Freaks” finds DOPESICK at their heaviest and most unnerving, bringing ‘90s alternative metal back to the forefront with a hint of grunge included for good measure. Led by Adam Albright’s driving riffs with a fiery drum section supplying further ammunition, Jonathan Russell is perfectly set up to deliver a scathing vocal performance with severe urgency.

On A Violent Happy Place, each song becomes instantly relatable as the listener is forced to revisit certain moments of their own life, but “Freaks” is a little more obscure. In fact, it is somewhat of an anthem for the underdog. “It is an ode to the struggling artists, skaters, street walkers, surfers, and punk rockers,” says Russell. “Forever may we dance with the freaks in the pale moonlight.”

The video also hints at a less glamorous side to the City of Angels, where “the decadence and evils of Hollywood begin to consume you,” as DOPESICK founding-member Albright reveals honestly.

Releasing the intriguing EP, The Love and Terror Cult in 2017, which featured guest appearances from Ill Nino’s Cristian Machado and Hed PE’s Jahred Gomes, DOPESICK’s momentum quickly gathered pace and culminated in A Violent Happy Place, which dropped in the final quarter of 2019 via the EMP Label Group. For fans of rock and heavy metal alike, DOPESICK leave no stone unturned in producing a little something from everyone.