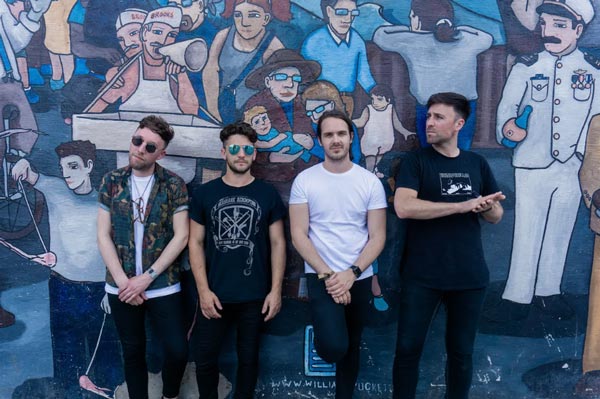 Vocalist Simon Thompson tells PopMatters, "The song came about when I was turning our spare room at home into our baby's nursery as the acoustics were awesome. I was writing songs off of the back of some pretty extensive touring over the years. There were definitely some issues with alcohol and substance abuse as a result, which impacted heavily on relationships. It's not necessarily an autobiography or about one person in particular. It's a story of an uncontrollable collision course of self-destruction from drug and alcohol abuse, the desolation of a failed relationship, and self-blame. 'Words I Couldn't Say' is the burden of the truth and a lie that is too heavy to carry."

BBC Radio proclaimed “No Resolve” the “Single of the Year,” while they impressed audiences at Isle of Wight and O2 Wireless Festival in addition to show-stopping stints on the Vans Warped Tour in 2013 and 2015 and support tours with Melanie Martinez, PVRIS, and Echosmith. Their 2015 EP, 'Fear To Feel', expanded their foothold in the U.S. Spotify featured the title track on coveted playlists such as The Indie Mix and Ultimate Indie Playlist, notching 40K streams in less than 12 hours and eventually amassing over 6M and counting. Meanwhile, they drew acclaim from Billboard, Huffington Post, Ones To Watch and more.

In 2016 the band signed their first record deal with Warner Bros and, preceded by the introductory focus track “Sleepwalking Pt.II”, released their full-length debut, 'Somewhere Between' in 2017. Recorded by Grammy Award-winning producer Carlos De La Garza [Paramore, M83] and recorded at Ocean Studios in LA the album was received with glowing reviews.

Up until 2018, the band toured their debut extensively, playing sold-out headline shows across Europe, UK and the United States along with some of their biggest festival appearances to date including Firefly and Summerfest. In 2019 they began working on their second studio album, which is currently anticipated for a 2020 release.