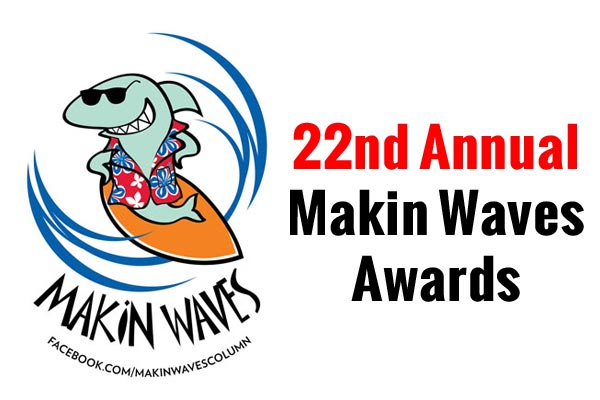 Band of the Year: The Outcrops — One of the hardest-working acts in Jersey who didn’t let a pandemic stop them from doing live shows, virtual shows or releasing a video as a follow-up to their amazing 2019 debut LP, “Peace of Mind.” Be sure to check out the Band of the Year Interview with the Northwest Jersey jam ‘n’ groove outfit and the premiere of the video for “Isolation Blues.”

Male Artist of the Year: Blaise — The passionate Asbury Park singer-songwriter made two stunning projects this year. “Velvet Noir // Stripped” in collaboration with the brilliant pianist-composer-arranger David Ross Lawn whittled the 2018 alt-dance LP into a torch song cabaret embraced by the spirits of David Bowie and Frank Sinatra. And the queer love story of the “Not for Sale” video was a gorgeous celebration of diversity and Asbury.

Female Artist of the Year: Candace Schur, Candy Cavity — This Asbury Park singer-songwriter-guitarist possesses the irresistible combination of Marilyn Monroe-like qualities: charming, cute, sweet, sexy, beautiful, naughty and trashy. Candace and her burly band of bearded macho men in Candy Cavity released a self-titled debut EP that was one of the best Jersey records of the year.  They followed it with impressive live videos, streams, and shows.

Album of the Year: A Halo Called Fred, “Go Home Drama You're Drunk and Other Tales of Going through Hell to Escape the Evil Monkeys” — An extensive collection of hysterically satirical, weirdly irreverent, expertly crafted tunes. In 40 years of writing about music, I’ve never had as much fun and laughed so much as I did while writing the review for this awesome album by these Central Jersey indie-rock veterans.

Song of the Year: Foxanne, "Opportunity" — Jersey-raised Foxanne takes something as fanciful as a trip to Mars and makes loneliness and a sense of abandonment bone-achingly real. Like a great animated family movie, “Opportunity” blurs the lines between man and machine because your heart is breaking for a Mars Rover, the unlikely narrator of the emotional tale.

Songwriter of the Year: Bruce Tunkel — Veteran Central Jersey singer-songwriter is prolific but outdid himself with two outings that add greatly to his catalog. The recent EP “American Patriot” is a skewering of America and its so-called patriots with intelligence, stunning narrative structure, and gut-wrenching irony, while this summer’s 18-song “Us” is a confessionally reflective examination of the fragility of hearts and minds.

Best Live Act: Anthony Krizan Band — The veteran Central Jersey rocker has a hot band that seems to have done more high-profile livestreams than any other. Anthony’s band features Muddy Shews on bass, John Hummel on drums, and such great rotating guests as John Ginty of the Allman Betts Band and John Korba, who’s played with Hall & Oates and Roseanne Cash.

Tsunami Award: Jerry Ryan of Elephant Talk & Elephants for Autism — This huge-hearted brother from another mother not only once again carried the South Jersey scene on his strapping back with his annual Elephant Talk Indie Awards, but he also raised $11,000 for charity, half of which was for his annual mission of combating autism. Look for another Elephants for Autism Music Festival in 2021.

Best Guitarist: Matt Fernicola, The Foes of Fern — The maestro of a massive band featured on his impressive solo debut LP, “Carpe Diem,” Fern is so much more than a great guitarist. He and his Telegraph Hill Records pardner and childhood friend Joe Pomarico are a pillar of the New Jersey music scene, especially in its center of Asbury Park. With their devoted team, they also made several awesome Foes of Fern videos showcasing Matt’s great chops.

Best Drummer/Bassist: Dan Haase, Candy Cavity, Pamela Flores, and Rachel Ana Dobken — With a diversity of talent, the former Stolen Rhodes member now adds greatly to Candy Cavity as drummer, while serving as a foundation to the roots-rock of Rachel Ana Dobken and the soulful music of Pamela Flores on bass. In 22 years of these accolades, Dan is the first musician to win on two different instruments in the same year.

Best Keyboardist: Joe Biglin, This Old Engine — I first heard this cat on last year’s amazing debut LP of The Outcrops, “Peace of Mind.” While not a full-time member of that band, his fantastic chops can be heard as often as possible in the Northwest Jersey-based Grateful Dead tribute band, This Old Engine, as well as in many tasty jams with musician friends that have filled a void of gigs.

Best Instrumentalist: Michael Squillace of Jake Tavill & Indigo Soul, Nick Ryan & the Mess, and The Foes of Fern — Not only is Michael a great sax man who can play in a variety of styles, but he’s also the big heart behind the Sayreville-operated Jammin for Jaclyn, an annual charity concert in memory of his sister that has raised thousands for cancer patients in need, including this year virtually, and now is featured in a documentary.

Producer of the Year: Neil Sabatino, Mint 400 Records — For 20 years, Neil has been making great records for his own North Jersey band, Fairmont, and more recently for others as the multi-hyphenated talent behind the impactful Mint 400 Records. In addition to Fairmont’s latest album, “Liminal Spaces,” Neil also helmed Splendid Engine’s splendid LP, "These Songs Will Destroy Us.”

Video of the Year: Dave Mooney and Viewers like You, “Back of the Line.” This hysterical clip features the band’s gigantic-sized manager, K.L. Martin of 3143 Artist Management, as a bouncer who won’t let Dave into his gig. Since he’s no David to K.L.’s Goliath, the Central Jersey singer-songwriter has to trick his way in, just in time to play his guitar solo. Lensed by frequent Mooney videographer Jacob Paul, the well-paced antics of the clip are so much fun!