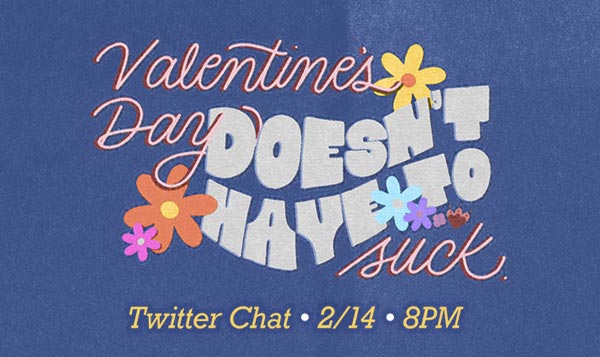 To Write Love on Her Arms (TWLOHA) has announced its 13th Annual "Valentine's Day Doesn't Have To Suck" live chat on Friday, February 14 at 8:00pm EST on @TWLOHA's Twitter page. People can participate in the chat, led by TWLOHA founder Jamie Tworkowski, by logging on to Twitter and using #TWLOHAVDay to follow along and ask questions that will be answered by Jamie and other members of the TWLOHA team.

Additionally, as part of their "Valentine's Day Doesn't Have to Suck" chat, TWLOHA is launching their second Twitch campaign, which will run from Friday, February 7 to Sunday, February 16. Streamers are encouraged to bring a conversation about hope and love to their communities and to help raise $15,000 to support the organization's mission. Streamers can set up their fundraisers here.

"For so many people Valentine's Day just plain sucks. With the help of streamers on Twitch, YouTube and Mixer, we're excited to bring back the Valentine's Day Doesn't Have to Suck campaign. Our goal is to bring a conversation about hope (and love) to communities online and raise $15,000 to support TWLOHA's mission. During the week of Valentine's Day (2/14), we're inviting streamers to go live, encourage conversation, share their mental health story, and connect people to life-saving resources with TWLOHA's FIND HELP Tool. We believe everyone should hear on this day that you are worthy of love. You matter," said COO Lindsay Kolsh.

This past September TWLOHA wrapped up their 8th annual campaign to honor World Suicide Prevention Day (September 10) and National Suicide Prevention Week (September 8 - September 14). With the help of supporters from around the world, the organization was able to raise more than $250k for treatment and recovery, surpassing their initial goal of $150k. Over 5,700 people donated to this year's "You Make Today Better" campaign, in addition to the sale of over 4,600 World Suicide Prevention Day packs. The money raised will help sponsor over 4,100 counseling sessions and fund 60,000 FIND HELP searches.

Since its start in 2006, TWLOHA has donated over $2.5 million directly into treatment, has responded to over 210,000 messages from over 100 countries, and traveled more than 3.8 million miles to meet people face-to-face at nearly 3,000 events. Each month, they connect with 5 million people online through social media and their FIND HELP Tool fields 5,000 searches made by people seeking affordable, local mental health resources.