The Disco 54 Band LIVE! at the Wine on the Beach Festival in Seaside Heights, NJ
NEWS | FEATURES | RADIO SHOWS | HOF
By Spotlight Central

It’s a beautiful Saturday, September 11, 2021 afternoon as music lovers and wine connoisseurs converge on the Seaside Heights, NJ beach and boardwalk for the 2021 Seaside Heights Wine on the Beach Festival featuring the music of The Disco 54 Band.

The two-day festival first took place in 2016, but was cancelled in 2020 due to the pandemic. This year’s Wine on the Beach Festival includes participation by 11 New Jersey wineries in addition to a wide variety of skilled artisans and vendors all assembled on the boardwalk.

A line of music lovers and wine enthusiasts forms at the Information Center near Blaine Avenue equipped with beach chairs, coolers, beach umbrellas, and ID cards — if they choose to indulge in the wine sampling that’s available today. Once registered, wine lovers fill the tents of the various New Jersey wineries on the boardwalk to sample wines and purchase bottles or cases of wine. Music lovers who are not involved in the wine-tasting aspect of the Festival stream directly onto the beach to find the perfect spot to enjoy the sun and fun of a free concert presented by The Disco 54 Band. 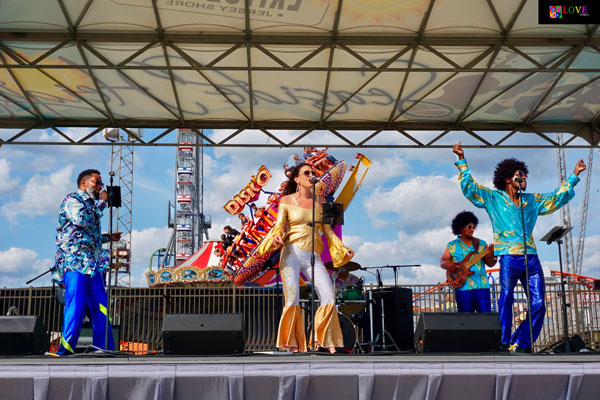 As we make our way onto the beach, it’s already filled with several thousand wine-loving music fans. Some have their chairs set up in circles of friends and are sharing wine and charcuterie from the stands that line the boardwalk. Others appear to be families with kids digging in the sand and dads throwing footballs to their youngsters as they get ready to enjoy a live set of music from The Disco 54 Band.

The members of The Disco 54 Band — Jessica DiDonato, Tommie Harper III, and Rodney Genwright on vocals; David Morales on keyboards; Bill Chase on guitar; Eric Marcillen on bass; and Bill Ciaramelli on drums — take the stage and fill the salt air with the sounds of yesteryear including such ’70s classics as The Trammps “Disco Inferno,” KC and the Sunshine Band’s “Get Down Tonight,” and Earth, Wind and Fire’s “September.” 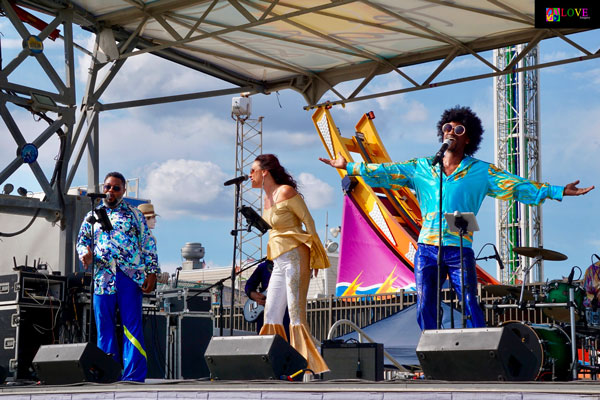 Members of the audience dance in the sand and sing along to the energetic sounds of the band.

When asked, “Are you having a good time so far?” the crowd responds with an emphatic “YES!” and many start to cheer when asked, “Where are our Tina Turner fans?” Here, Disco 54 launches into its rendition of Tina Turner’s “The Best,” sung by female vocalist Jessica DiDonato — a self-proclaimed “Jersey girl” — who sports a gold lame outfit with white bell bottom pants. 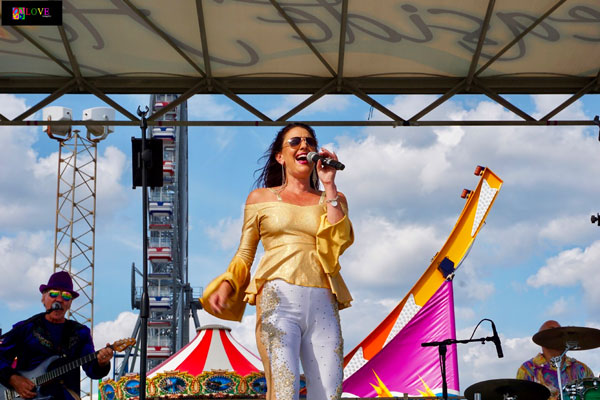 With her sultry voice, DiDonato handles the lead vocal with ease as she’s capably accompanied by her bandmates including bassist Eric Marcillen and male vocalist Tommie Harper III who sport large afros and oversized glasses which help bring the disco era to life here on the beach. 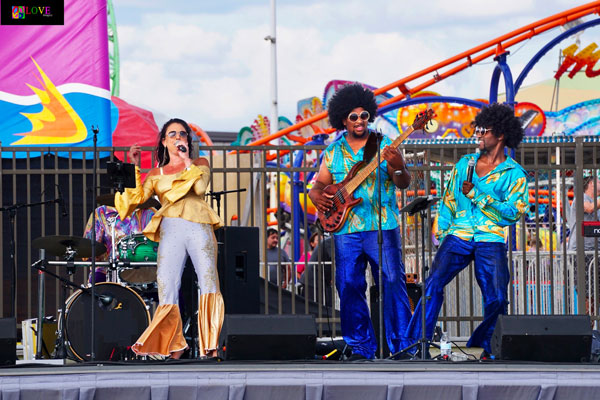 Dancers create a conga line in the sand as they sing along to The O’Jays’ “Love Train.” Then, disco fans dance with wine glasses in their hands to a rhythmic rendition of Donna Summer’s “Bad Girls” before the band fulfills a special musical request from an audience member and plays “Tennessee Whiskey,” a country ballad featuring smooth vocals by Rodney Genwright which has couples slow dancing together in the sand.

Jessica DiDonato is featured again on the well-known Ike and Tina Turner version of “Proud Mary.” The audience sings along as the music starts off slow and sexy before Jessica asks, “Are you ready?” and drummer Bill Ciaramelli picks up the tempo. Beachgoers jump and move as they happily sing out on the song’s famous “Rolling/Rolling/Rolling on the river” chorus before Bill Chase’s wailing guitar solo elicits shouts and applause from the audience. 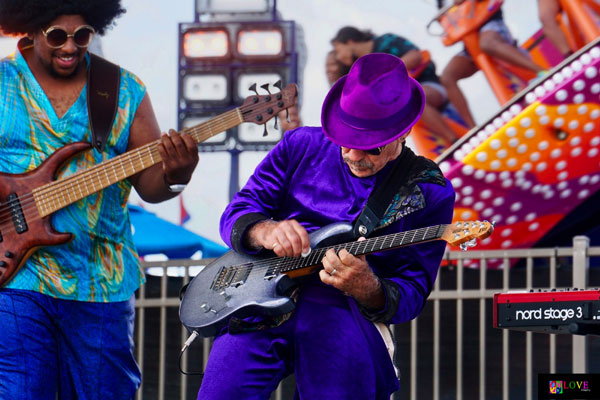 The breeze cools the crowd as the music heats up when The Disco 54 Band fast-forwards three decades to 2015 and plays Mark Ronson and Bruno Mars’ “Uptown Funk.” The number features choreographed dance steps by Jessica, Rodney, and Tommie who get everyone to clap their hands and happily chant the rhythmic “Uptown funk you up/Uptown funk you up” lyric in unison.

Lovers of ‘60s-era Motown music sing along on the beach to the group’s rendition of The Temptations’ “My Girl,” the breeze blending their voices into one as couples slow dance in the sand. The ocean also adds the sound of pounding surf to the beat of Sister Sledge’s “We Are Family” before audience members snap, tap, and clap along to The Jackson 5’s ‘70s-era bubblegum pop hit, “I Want You Back.”

Singer Tommie Harper III exclaims, “You guys are looking good out there!” as the band launches into its rendition of McFadden and Whitehead’s “Ain’t No Stopping Us Now” featuring Eric Marcillen’s funky bass playing and Tommie and the audience repeatedly spelling out the word, “S-T-O-P-P-I-N-G,” in rhythm. 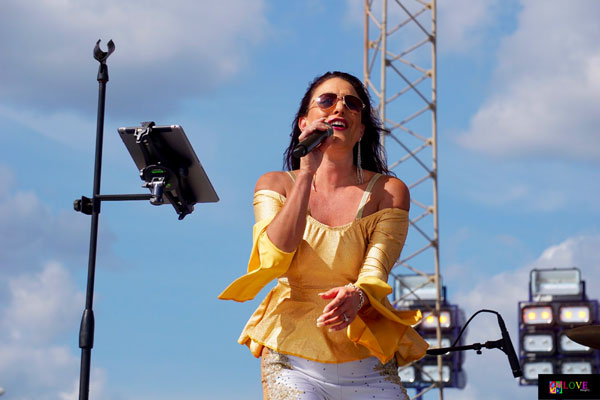 After she asks, “Are you having a good time?” the crowd cheers and DiDonato responds with an authoritative rendition of Gloria Gaynor’s “I Will Survive” which also sports frontmen Rodney Genwright and Tommy Harper III stepping in rhythm with bassist Eric Marcillen. 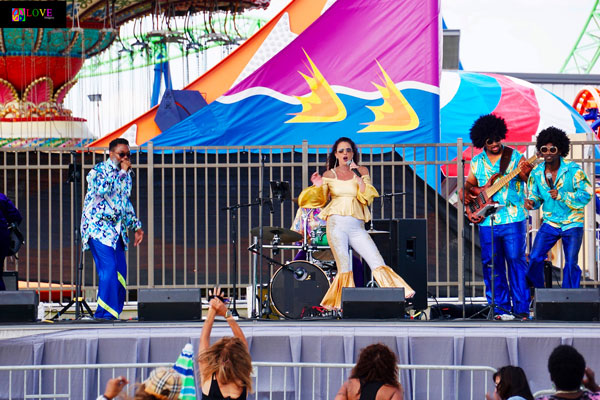 The number also features a David Morales keyboard solo and a segment where Bill Chase comes down off the stage and plays a sparkling guitar solo in the sugar-white sand.

The DISKO amusement ride swirls in the background to the sound of The Commodores “Brick House” on an arrangement which features funky bass, rhythmic guitar, and a soulful lead vocal. Then, the tempo speeds up as the band segues into their rendition of Aretha Franklin’s “Respect” which includes a wah-wah guitar solo and the crowd spelling out “R-E-S-P-E-C-T” in perfect rhythm with the band.

After Tommie asks, “Any Michael Jackson fans out there?” he takes center stage with his interpretation of the King of Pop’s “Rock With You.” 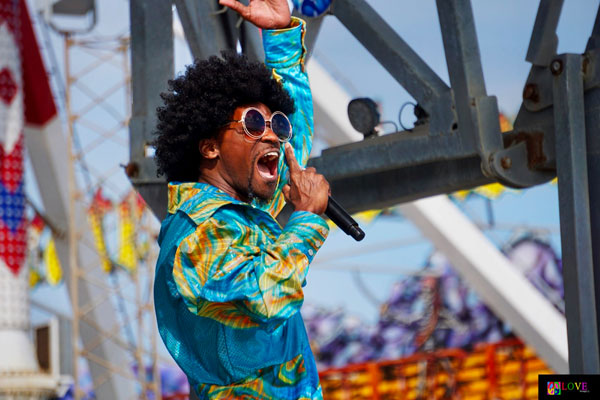 Following such classic tunes as LaBelle’s “Lady Marmalade,” Kool and the Gang’s “Celebration,” and Wild Cherry’s “Play That Funky Music,” the group announces, “We are The Disco 54 Band from New York City, and this is our last song.” Here, DiDonato channels the spirit of Donna Summer on the slow intro to “Last Dance” before drummer Bill Ciaramelli picks up the tempo and dancers rise all across the beach to join in on this last musical number of the day. 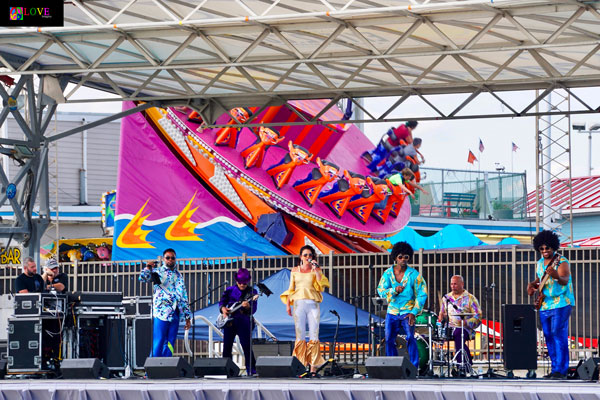 As we begin to make our way off of the beach and back onto the boardwalk, we take a moment to chat with several attendees who share their opinions about today’s Wine on the Beach Festival.

Comments Marissa from Ringoes, “This festival is a lot of fun! It brings real excitement to the Seaside Heights boardwalk,” joking, “I’d give it a 10 out of 10 after the wine — and even before the wine!” Marissa’s friend, Ashley from Yardley, PA agrees, adding, “It’s a much-needed diversion from the pandemic,” while her friend, Courtney from Newtown, PA remarks, “It’s a nice escape from reality, and on a really gorgeous day!”

Kathy from Manchester concurs, stating, “We’re having a wonderful time, and the weather is just perfect!” Whereas Patti from North Arlington points out, “It’s a very happy crowd out here today!” Diane from Manchester suggests, “This Festival is such a great idea! I hope they continue to do this every year.” 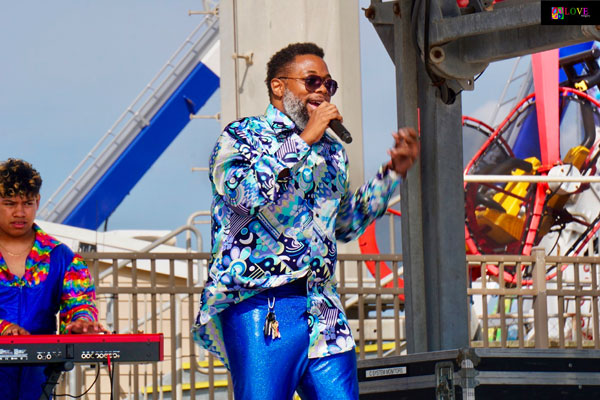 Lillian from Hingham, MA tells us, “I live in Massachusetts now, but I grew up in New Jersey in the ’70s, and I can tell you, this music today made me want to move and groove!” Jim from Warwick NY concurs, explaining, “The Disco 54 Band is fantastic! They’re so energetic, and they brought back a lot of memories from the old days for me. It was good dancing music, a good dancing crowd, and the wine was good, too!”

Lastly, we chat with Angie, a resident of Seaside Heights, who declares, “The Disco 54 Band was amazing! Their music appeals to a wide range of people,” before concluding, “We danced and we all had fun — and that’s what it’s all about!” 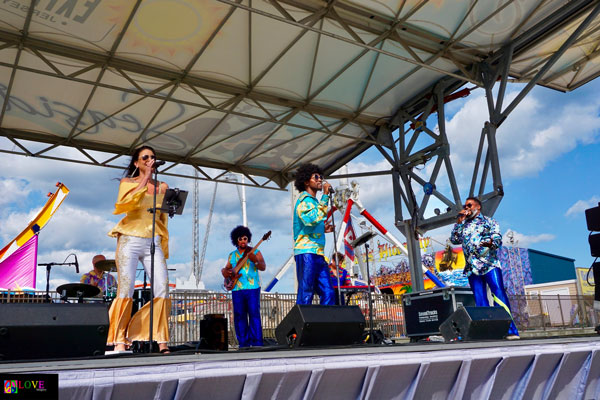 To learn more about The Disco 54 Band, please go to facebook.com/disco54band. For information on future events in Seaside Heights, NJ, please click on exit82.com.