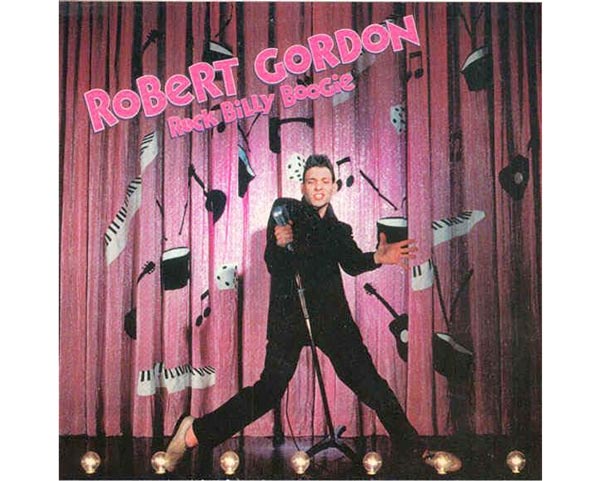 (STANHOPE, NJ) -- As sometimes happens when a career takes a turn for bigger success, it's by accident. While Robert Gordon was well established in the New York City punk scene with a band called Tuff Darts in the early 1970s, it was a chance encounter in a studio with record producer Richard Gottehrer that sent Gordon in a new direction: rockabilly. Impressed with Gordon's baritone voice and his rendition of Elvis Presley's "One Night", Gottehrer saw something in Gordon and two began collaborating on projects. And now, some 40 years later, Gordon is considered a leader in the revival of rockabilly.

Gordon brings that sound - and a sense of rockabilly history - to the Stanhope House on Saturday, September 25. Showtime is 7:30pm.

Gordon's career catapulted in 1978 when RCA Records signed him to a contract which he described as "a dream come true" to record for "Elvis's label". In February, 1979, the album Rock Billy Boogie was issued on the RCA Victor label. Gordon got the attention of the music media. Classic Rock History journalist Brian Kachejian described the single "Rock Billy Boogie" as the song that defined the artistry of Robert Gordon more than any other song in the singer's catalog and Bruce Eder of All Music hailed Gordon's next album, Bad Boy, released in 1980, as one of the best mature rockabilly albums ever recorded. Gordon's next and final album for RCA was 1981's Are You Gonna Be The One. The title track written by Marc Jonson. It is Gordon's best-selling album to date, with more than 200,000 copies sold.

Gordon musical success continues decades later. But his talent is not limited to music.

In 1982, Gordon co-starred with Willem Dafoe in future Oscar winner Kathryn Bigelow's first film, a 1950s-styled motor-biking movie (inspired by Marlon Brando's The Wild One) called The Lovess. This was Dafoe's first feature starring role. Critics generally liked the soundtrack but disliked the film. The Loveless did poorly at the box office but is now considered a cult favorite. Gordon also appeared on the TV comedy show SCTV in which he performed with his band - after having been "mistakenly" booked on the show as the astronaut Gordon Cooper. This included a spoof of a space shuttle launch.

Music, however, has always been his No. 1 concern.

Gordon grew up in Maryland and by age nine was greatly inspired by the Elvis Presley and his song, Heartbreak Hotel. That song convinced Gordon that he wanted to pursue a career as a rock and roll musician at that young age. As time went on he was influenced by people like James Brown, Otis Redding, Gene Vincent, Jack Scott, Billy Lee Riley and Eddie Cochran. By 17, he had recorded his first song with the band, The Confidentials.

The Stanhope House is located on Main Street in Downtown Stanhope. For ticket information to this show and others at the club, visit www.stanhopehousenj.com.