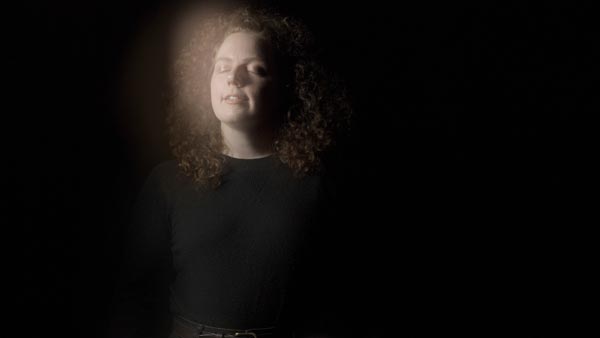 Self-Defense
, which is playing at the 2022 New Jersey International Film Festival on Saturday, June 4, is a wonderfully captivating and intimately reflective art performance piece created by Joni Whitworth and Sam Tam Ham about experiencing the world as someone who is neurodivergent. Initially, Joni entails her thoughts and emotions using beautiful poetic imagery, while stunning visual effects supplement her storytelling. Suddenly, the film shifts into a different tone. In a blunt expose of reality, this film reveals the systemic decades long abuse of helpless neurodivergent youth housed at the Judge Rotenberg Center via inhumane shock collar therapy. Finally, Joni asks of the viewer to protect neurodivergent people from being othered, harmed, or abused, a term she calls “self-defense.” Self-Defense is an extremely rich, enlightening experience exposing the truths of neurodivergent people in a world that fails to recognize the damaging perceptions it holds.

Joni is told by someone who is neurotypical “Because we are not in a perfect world yet, we must learn to defend ourselves.” “Ourselves” was meant to refer to human beings in general, but Joni saw a separation in the word. “Our” refers to neurotypicals like the woman who told her this and “selves” refers to neurodivergent people like herself. The film divulges how the world's perpetual othering of neurotypicals creates this environment where neurotypicals aren’t socially safe. The brilliant visual effects cover, uncover, and fade Joni as she describes approaching the freedom to exist without limits as one confronts the ocean. The sound of piano and violin create this entrancing atmosphere as she describes it. The way this piece uses poetic imagery to illustrate freely being oneself in tandem with the visual and sound elements is incredibly powerful, well done, and enthralling.

This film explores the perceptions of neurodivergent people formed by social chasms and atypical behavior. Joni describes an interaction in which her attempt at deeper connection with someone was met with confusion and an unrequited want for intimacy. The image of her divides slowly, representing her and the other person. As she expressed her desire to intimately get to know them, the two halves converge into one. However, she discovers neurotypical people find attempts like this unwelcome.

How this piece paints a picture of the difficulty of assimilating to normality without the freedom to be yourself is beautifully done. The film makes sure to highlight, however, that there is the opportunity to help a neurodivergent person in the process of forced assimilation. Joni describes the act of kindness as “self-defense” in a world that is violent against neurodivergence. The idea of self-defense as an act done by someone outside of you is thought-provoking and pivotal throughout this piece. When neurodivergent people have moments that are not seen as normal, it takes someone who thoroughly understands normal to help them assimilate to an environment that demands this of them. Self-defense is basic human etiquette and remains a choice many do not take.

In the next sequence, Self-Defense discloses the forcing of normalcy upon neurodivergent people via inhumane, vial means. Joni proposes the question of whether the meaning of a shock collar changes when it is called by a different name or covered by “floral language and poetry.” It is then revealed that a shock collar, called by a different name (G.E.D), administers torturous to neurodivergent patients today at the Judge Rotenberg Center in Massachusetts. Autistic youth are shocked for minor things such as small repetitive movements or failing to take off their jacket. An autistic teenage boy named Ari was sadistically shocked 33 times in one day for shuffling too loudly. Joni calls for action against this systematic abuse by using sounds of repetitive movement including her own, derived from Irish river dance, in rebellion against the tyrannical abuse of children. Joni then highlights that wanting to protect neurodivergent people by telling them to be normal isn’t true self-defense. In this light, the neurotypical person asks them for self-sacrifice.

The analogy of having joy in the ocean of freedom of expression returns, and it’s such a wonderful paradox. On one hand, it’s established that returning to the beach at night is risky, but on the other hand, once reached, it’s a safe haven that gifts you the freedom to be yourself. Fresh from the ocean, Joni recalls being asked to forgive neurotypical people for how demanding they are. She responds by asking neurotypicals to forgive neurodivergent people for their “abnormal” behavior. This request for fairness is all encompassing, applying to every aspect of the othering and social judgment of neurodivergent people. Neurotypicals are not usually the ones being called to change, yet this film rightfully asks this of them. The suggestion is unapologetic and uniquely conveyed. In conjunction with the deeply intriguing storytelling and the beautiful technical elements, this conclusion of equality makes this film not only impactful, but actionable.

Self Defense will be screening as part of the 2022 New Jersey International Film Festival  Shorts Program #1 on Saturday, June 4, 2022 – Online for 24 Hours and In Person at 5PM! For more info on this screening go here.

The 27th annual Festival will be taking place on select Fridays, Saturdays, and Sundays between June 3 -12. The Festival will be a hybrid one as we will be presenting it online as well as doing select in person screenings at Rutgers University. All the films will be available virtually via Video on Demand for 24 hours on their show date. Each ticket or Festival Pass purchased is good for both the virtual and the in person screenings. The in person screenings will be held in Voorhees Hall #105/Rutgers University, 71 Hamilton Street, New Brunswick, NJ beginning at either 5PM or 7PM on their show date.  Tickets: $15=Per Program; Festival All Access Pass=$100.