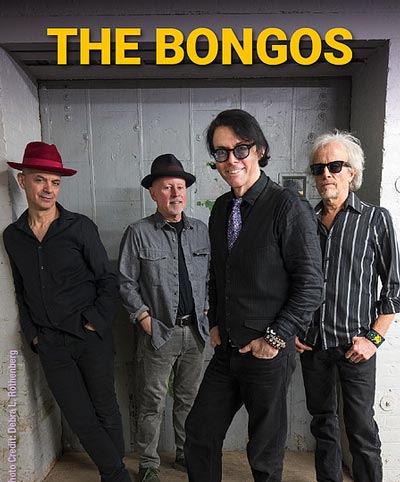 This show to be held outside at the Van Vleck House and Gardens (21 Van Vleck St, Montclair, NJ) at 5pm on Sunday September 19th, 2021.  In case of inclement weather show will be held in our regular location (First Congregational Church of Montclair  - 40 S Fullerton Ave, Montclair, NJ)

The Bongos were founding fathers of the Hoboken pop scene of the 1980s and, with a handful of others, were progenitors of the Indie Rock movement that followed. Led by Richard Barone, the group recorded its debut album Drums Along the Hudson (1982, PVC Records) primarily in England. With its unique mix of Beatlesque melodies, experimental outbursts, sensual rhythms, power pop and punk sensibilities, the album was a critical smash on both sides of the Atlantic and a college radio staple in the U.S., spawning their Billboard-charting cover of the T.Rex classic “Mambo Sun”. Relentless touring led to signing with RCA Records, the addition of guitarist James Mastro, and the release of the group's sweeping signature song “Numbers with Wings” (1983, RCA). Its accompanying video became an instant MTV favorite, earning a nomination at the first Video Music Awards. Tracks like “Barbarella” and “Tiger Nights” fared well on the fledgling alternative radio format and further raised the group’s profile. They released Beat Hotel (RCA) in 1985, a year that saw them perform over 300 concerts. At the end of that year, they retreated to the Bahamas with music legend Chris Blackwell and co-producer Eric “E.T.” Thorngren to record what was to become their long-lost Phantom Train album, which finally saw the light of day in 2013. By 1987, each member of the group, Barone, Mastro, bassist Rob Norris, and drummer Frank Giannini began to pursue solo projects and other collaborations, and performances by The Bongos became increasingly rare. In 2013 they reunited to perform on the final night of their beloved home club Maxwell’s in Hoboken, the venue where they were also the first act to perform. Since then they have reunited for special events and mini-tours. In 2020 they will be making select concert appearances to celebrate four decades of Hoboken pop.