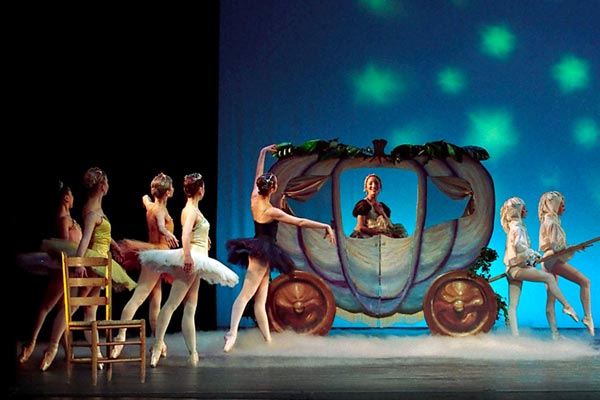 One of New Jersey Ballet’s most popular productions for children, Cinderella is a two-act ballet of the well-known fairy tale in which a girl loses a dancing slipper and finds happily ever after with a prince. See the hours of the clock come to life and dance, a Fairy Godmother and beautiful Fairies of the Four seasons in the enchanted garden, and the pumpkin which turns into a coach before your very eyes! Splendid sets and costumes, glorious dancing, New Jersey Ballet’s hallmark “Storyteller” narration makes sure even the littlest theater-goers can keep up with ease.

For nearly sixty years, NJB has thrilled audiences from Bergen to Cape May with top quality professional ballet, giving hundreds of thousands of adults and children their first introduction to ballet and inspiring in many a lifelong love of the arts. New Jersey Ballet has also taken the best of New Jersey arts to audiences in other parts of the country and set records on international tours to Bermuda, India, Italy, Russia and Taiwan.

The founding of New Jersey Ballet created a profound change in the state’s cultural landscape. During its 22 week season, NJB’s critically acclaimed dancers perform a variety of works from classical, contemporary, and jazz ballet, as well as new works from some of the most exciting choreographers working today. This repertory includes works by Agnes deMille, Antony Tudor, Petipa, Johan Renvall,  Pedro Ruiz, and many more. The company also has one of the largest collections of ballets for children in the country.

The highlight of the season for thousands of families is NJB’s Nutcracker, the longest running original professional production in the state. This year, the company will give 22 performances in four venues statewide, fourteen of them with the New Jersey Symphony Orchestra at Mayo PAC in Morristown. The production debuted in 1971 with Edward Villella, then an international star with New York City Ballet, as the Cavalier. Today, after more than 900 performances and over a million viewers, it has become a cherished holiday tradition with three generations throughout the state and beyond. In 2008, the production made history as the first full length classical ballet ever performed in India, where it sold out three performances at that country’s Performing Arts Center in Mumbai.

New Jersey Ballet is designated a Major Arts Institution by the New Jersey State Council on the Arts in recognition of its “artistic excellence, substantial programming and broad public service.” The company is a three-time winner of the title New Jersey’s Favorite Dance Company in the People’s Choice competition.

Barbara Gilford, dance writer for The New York Times / New Jersey Weekly for more than ten years, wrote this about the impact and value New Jersey Ballet has for New Jersey.

New Jersey Ballet Company is the ONLY dance organization in the New York metropolitan area that takes high quality programming and performances to urban, rural and suburban communities throughout New Jersey (and at a cost that is “affordable” in comparison with the major organizations in New York City who are at home at Lincoln Center). Residents of our state have access to a three hundred year-old dance tradition, frequently on their doorsteps. New Jersey Ballet is an assemblage of professional dancers who embody the highest standards of technique and artistry and they are OURS!!!”