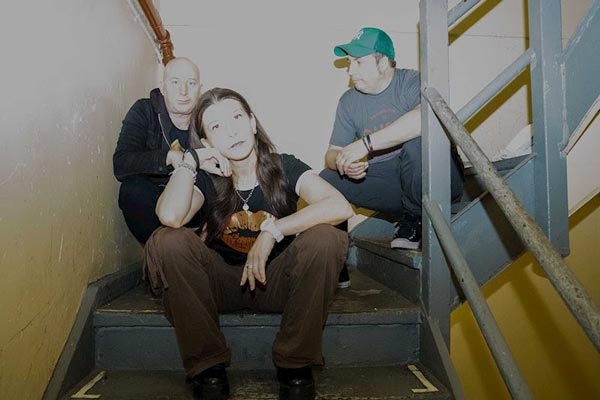 College rock / power trio ON have released their self-titled 'ON' album, via Indiestructable Records, which ON guitarist Steve Fall says is "a document of friendship navigating explores in pain, and hope. Looking at the world with a collaborative effort to document what we see, witness and feel through songwriting and chemistry as a band."

Made up of Lucy Di Santo (vocals, bass), Dan Cornelius (drums) and Steve Fall (guitars) - formerly of popular Toronto acts such as Acid Test, Danko Jones and Deliuss - ON is always pushing forward with an eye on the rear-view mirror, ON pays homage to its roots - post-punk, grunge, old-school funk and 90s college rock. With infectious guitar riffs with a dash of p-funk groove, ON's music recalls a listening journey of classic albums on vinyl.

"This record deals with where we are today and what we’ve overcome, persevering as a society and as individuals. I found myself as part of a genuinely authentic creative, human experience with Steve and Dan in various geographical locations including NYC, Florida and Toronto and felt the need to document it melodically. It’s about pain, hope, reframing and overcoming. It’s about survival. The songs are an authentic and complete collaboration of the triad and soul connection that is ON," says Lucy Di Santo.

ON also present a flashy and fun video for the non-apologetic single 'Blackmail', directed and edited by Michael Gucciardi and filmed on location at The Jam Chamber in North York, Ontario. Earlier, they released the brazen lead single 'Underdog' with lively video filmed by Lindi Gordon and edited by Gucciardi.

"This video is a visual representation of enlightenment and empowerment... I'm clear, I know what the score is... This is a song about empowerment, strength, and self-actualization. It embraces recovery of one’s authentic self and soul from external forces - whether they be human, institutional, cultural, or chemical," says Lucy Di Santo.

Having toured the USA, Mexico and Canada, ON's recordings have appeared on various CFNY and CMW New Music Compilations, as well as limited cassette tape releases via the Opcion Sonica label.

Toronto is still home for Di Santo and Fall, while Cornelius currently resides in NYC. Written in Toronto and New York City, the pre-production recording took place in Cape Coral in 2021 with Drew Howard at Star Sound Studios. The band has since been working out of Phase One Studios with sound engineer Darius Szczepaniak (Sum 41, Black Crowes, Big Sugar, Bare Naked Ladies, Jann Arden).

The full 'ON' album is out now and available everywhere online, including Spotify, Apple Music and Bandcamp or ordered at https://indiestructablerecords.com.