(ORADELL, NJ) -- The Bergen County Players has announced their 2022-23 season. They will return full-time to the stage with an ambitious, joyous and playful year of audience-pleasing musicals and innovative plays for its 90th season. From delightful musicals to hilarious comedies to thought-provoking dramas, BCP has garnered a reputation for outstanding quality productions at affordable prices. As audiences have been anxiously anticipating the return to theater, the company is excited to kick off the season with the Tony Award-winning play, RAGTIME: The Musical.

September 17 - October 15, 2022 RAGTIME: The Musical; Music by Stephen Flaherty; Lyrics by Lynn Ahrens; Book by Terrence McNally; Directed by Larry Landsman. A compelling epic musical capturing the American “melting pot” experience at the turn of the 20th century, Ragtime tracks three diverse families in pursuit of the American dream as they confront the contradictions inherent in American reality: experiences of wealth and poverty, freedom and prejudice, hope and despair. Nominated for 13 Tony Awards, “The show contains some of the most breathtaking musical theater writing of the last 25 years. Trust me, musical theater lovers: The show, pulled off with polish and panache, is one you won’t want to miss!” (LA TIMES)

October 29 - November 19, 2022 Clue; Based on the Screenplay by Jonathan Lynn; Written by Sandy Rustin; Directed by Bill Kaufman. Based on the 1985 movie, all of your favorite characters are brought to life, including Professor Plum, Miss Scarlet, Colonel Mustard and more! “This game is a madcap, 90-minute puzzle that's mostly silly and engagingly fun.  Chockfull of physical comedy, sight gags, and dorky goodness, this board game come to life is a wonderful distraction from 21st century realities.” (NEW JERSEY STAGE)

December 3- 18, 2022 The Story Of The Velveteen Rabbit; Based on the book by Margery Williams; Adapted by Anita Larsen; Music & Lyrics by Bill Francoeur; Directed by Bunny Mateosian. The entire family will enjoy this classic story about how a toy rabbit learns the true meaning of being real. In this enchanting musical, based on the children’s book by Margery Williams, the Velveteen Rabbit earns the love of a young person and learns about the joys and pains of love, loss, and self-esteem.

February 18 - March  11, 2023 The Play That Goes Wrong; Written by Henry Lewis, Jonathan Sayer & Henry Shieldsl Directed by Ray Yucis. The thespian troupe of Cornley University is putting on a production of ‘The Murder at Haversham Manor’, but in this ‘play-within-a-play’ you can just sit back and bust a gut at all of the misplaced props, forgotten lines, banged heads, missed cues, pratfalls, door slams, broken fingers and mispronounced words as the show literally falls apart at the seams. Winner of the 2015 Olivier Award for Best New Comedy, you will truly enjoy “one of the most laugh-filled works that has ever jollied a stage” (NY Stage Review).

March 25 - April 22, 2023 Barbecue; Written by Robert O'Hara; Directed by Peter Colletto. One of the most creative and inventive plots ever seen on the BCP stage, this dark family satire about addiction, intervention and recovery works around the edges of class, race and fame. But trust us, it’s not what you think it is! Written for an adult audience, this is a “sly and cynical play (that) also happens to be hilarious.” (TheaterMania).

May 6 - June 3, 2023 It Shoulda Been You; Music by Barbara Anselmi; Book & Lyrics by Brian Hargrove; Directed by Dottie Fisher. “A delightfully giddy, goofy musical comedy!” (USA TODAY) follows the comings-and-goings of two crazy families on the morning of the impending nuptials between the Jewish Rebecca and the Catholic Brian. Tensions rise to the fore in this fast-paced farce featuring contemporary music that will appeal to anyone who has been through wedding plans. “…it practically redefines the term “guilty pleasure”.” (HOLLYWOOD REPORTER) 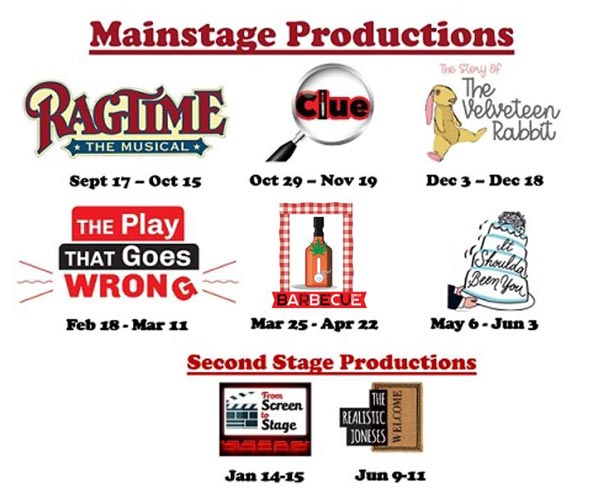 January 14-15, 2023 The Realistic Joneses; Written by Will Eno; Directed by Glenn Woertz. It’s a simple premise: Bob Jones and his wife Jennifer meet their new next-door neighbors, John and Pony Jones, and they proceed to discuss their lives. "But don’t come to the play expecting tidy resolutions, clearly drawn narrative arcs or familiarly typed characters. 'The Realistic Joneses' progresses in a series of short scenes that have the shape and rhythms of sketches on 'Saturday Night Live' rather than those of a traditional play…but cut to the heart of how we muddle through the worst life can bring." (NY TIMES)

June 9-11, 2023 From Screen To Stage; Conceived and Directed by Jacqueline Poquette. Reprised from a concept originally seen on our stage in 2010, here's a new chance to see your favorite movie scenes from our American cinematic history come to life on the BCP stage as they are reenacted in front of you. A very different type of show that will be sure to bring back fond memories!

Tickets prices for the 2022/23 Season are Musicals $29, Plays Fri/Sat $24, Plays Sun $21, Second Stage $15 and Children's Show $15, and can be purchased online at www.bcplayers.org, by calling 201-261-4200 or by visiting the box office at 298 Kinderkamack Road in Oradell during regular box office hours. Visa, Master Card, and American Express are accepted. COVID REGULATIONS: Please their website for the most updated information.

BCP's popular Questions & Artists talkback session will be held on the first Friday performance of the show’s run. Those interested in Group Sales of 20 or more tickets can email groups@bcplayers.org or call the main number and press #6.

Row K, Seats #1 and #2 are held to accommodate people with disabilities. They can be purchased by calling the box office at 201-261-4200. These seats will be released for public sale two weeks prior to performance. Advance discount tickets for students age 25 and under with proper ID are available for $18 by phone or walk-up only, and student rush seats can be purchased for $5 (cash only) starting 30 minutes before curtain at every performance, pending seat availability. There is a limit of one rush ticket per student.

Parking is free at the Park Avenue municipal lot, across the street, one-half block north of the theater.

The Bergen County Players has grown tremendously from its roots as a small community theater when it was founded in 1932; today, nearly 300 volunteer members, working on and off stage, make possible the nine productions presented each season.