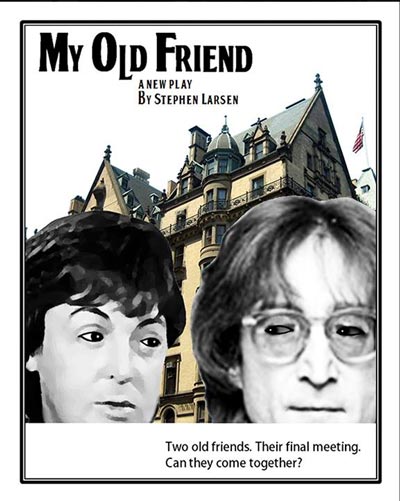 (HOLMDEL, NJ) -- The Holmdel Theatre Company will present a reading of Stephen Larsen's play My Old Friend on Monday, June 4th at 7:00pm. The play is about a little-known final meeting of John Lennon and Paul McCartney.   This is the first public reading of the play. Admission is free and coffee is served.

The play begins on November 5, 1980. John Lennon, alone in his apartment at the Dakota in New York City, is at a crossroads. He has been having recurring dreams of death and is ready to make big changes in his life, that is if he can summon up the courage. Just then, who should appear, unannounced at his door but Paul McCartney.  The two haven't seen each other for about four years.  John is both glad and a bit wary at the sudden appearance of his old friend.  Can they mend fences? Can they come together? Or they forever doomed to be bound by the strands and complications of their shared history?

New Jersey Stage spoke with Larsen via email about the play.

Was the November 5th meeting real or fiction for the story?  I believe it was real. According to Jack Douglas, John’s record producer on Double Fantasy – and who was working with John on the night he was shot – John and Paul had at least one writing session in the Dakota (building where Lennon lived). A follow-up session was cancelled when John was waiting for Paul to show up and was told that Paul did not show; Paul, on the other hand, was told that John was too busy to work with him that day.

Besides Douglas, others who have corroborated that John and Paul were taking initial steps to collaborate again were Linda McCartney (who told Carl Perkins about it – Carl Perkins is a key character in this play) and James McCartney (Paul and Linda’s son, born Sept. 12, 1977) who said “I know John held me as a baby… I have memories of the Dakota building, very white, lots of sunlight pouring in.” Now, since John and Paul had last seen each other before James was born, on or around April 24, 1976 (the night when they watched Lorne Michaels offer the Beatles a check for $3,000 to appear on Saturday Night Live and they joked about driving down the take Michaels’ up on the offer)… and James remembers the White Room of John’s Dakota apartment (which appears prominently in my play), I figured James was maybe around 3 years old when he was there… so that puts it in the vicinity of Sept. 1980.

Which leads us to how I decided the date of John and Paul’s détente meeting was Nov. 5, 1980. Simple. Paul was in England the fall of 1980 until Nov. 4, when he flew to NYC to oversee the final edits on the Wings concert film Rockshow – and he flew back home to England on Nov. 6. So I figured, Nov. 5 was the logical date that Paul would have slipped out from the editing suite and stopped by to reconnect with his old friend, John.

I'm guessing you are a fan of either The Beatles or John Lennon. What do both mean to you? First off, I am a fan of all of The Beatles – as a band, as individual artists and as people. The older I get, the more amazed I am at the amazing grace with which they handled – at such a young age - being in a fishbowl of fame very few have experienced or can even imagine. They entered my life at a very difficult time. My mother died when I was 10 in Sept. 1963. President Kennedy was assassinated in Nov. 1963. I was reeling. Then the Beatles arrived, appearing on the Ed Sullivan Show I February, 1964; for the first time in months I felt that there was hope. Their music was great, they were so witty – I bought every Beatles record and magazine I could get my hands on. Early on, I learned John and Paul also lost their mothers at an early age – that bonded them together, and it bonded me with them. I figured ‘if they could get through it, so can I…’ And I’ve followed them ever since; you could say, I’ve done 50-plus years of research for this play.

What inspired you to write a play about these two now?  For nearly 30 years, I worked as a journalist/video producer-director for a U.S. Army project manager out of Fort Monmouth, NJ. I travelled the world from Asia to Europe to Iraq; I had stories I wanted to tell, but my job, much as I loved it, left me exhausted. Then, they closed Fort Monmouth, I declined a lucrative offer to move to another Army position in Virginia, and in Sept. 2011 I was out of work. I started writing the stories I had always wanted to tell, first screenplays, then plays. It took me a while to learn about dramatic structure in a stage play; My Old Friend was the fifth full-length play I’d written; but it is the first in which I felt like I had a good idea of how to tell the story for the stage (by now, I’ve written six full-length plays and am working on my seventh).

In the play, John & Paul have lunch together and dread running into a die-hard Beatles fan. How much fun was it imagining what the two of them might say to each other? Oh, that scene was a blast to write, for sure; but the entire play is a roller-coaster ride. John was fun to write sometimes, with so many puns and purposeful malaprops – but Paul was no slouch in the wit department, either (nor is George – or Ringo – though sadly, neither of them appear, in person in this play). Plus – without giving away too much of the plot – John is in the process of purging himself of a lifetime of pain – and Paul is taking the brunt of it. I consider myself a “method” writer, in that I become each character that I write; let me tell you, it was not fun having John Lennon’s pain living in my head – and then being on the receiving end of that pain when I was writing Paul. But underneath it all was the love they have for each other.

As a Beatles fan, to me there is something nice about thinking about them as old friends at the end. Do you have that feeling too? As I said in the previous answer, underneath it all was love. Who can hurt us more than someone who loves us? And who can heal us more than someone who loves us? Theirs was a friendship the likes of which I don’t believe the world had seen before – and it was played out in public, so some of the barbs had a lasting sting to them. But when they were together, and Paul was hurt or confused by something John said, John had a habit of pulling his eyeglasses down on his nose; he'd look over them, and say: “It’s only me, Paulie…” (and, oh yes, this happens in the play)

Will there be music during the reading? Yes – in that we will be performing music during the reading. In the restaurant scene, John and Paul sing an old Liverpool sea shanty (John, of course, making up some of the lyrics as he goes). In John’s apartment, John and Paul sing together when they are working on one of John’s songs (Paul contributes a verse); and after Paul leaves, John is inspired and starts writing another song which he sings (in a full production, these will be both be played on a piano). Then, at the end of a recording session in George Martin’s recording studio on the Caribbean island, Montserrat, Carl Perkins plays on guitar and sings a song for Paul which came to Carl in a dream (this brought tears to my eyes in rehearsal the other night…) Then we see and hear Paul play guitar and sing as he writes a song to John.

Have you ever worked with Holmdel Theatre Company before? I have never worked with the Holmdel Theatre Company before, but I am thrilled to be there as I saw their production of The Imaginary Invalid in 2014, and it was one of the best productions I have ever seen anywhere (including Broadway). One thing that appeals to me about HTC is that they mix Equity Actors with local Actors – including young Actors from the community; and their seasons typically include some classics mixed in with lesser-known or new plays.

Finally where are you personally from and where do you live? I grew up on Staten Island, NY, which is ostensibly part of New York City (in the sense of being a limited partner to George Steinbrenner – there is nothing quite so limited). I always felt like a prisoner in a nowhere land when I was growing up on Staten Island – I’d see all the people taking the ferry to the City every morning for work and dreaded that I would someday have to do that for the rest of my life (I wrote a play about that experience called Ferry - kind of like Waiting For Godot, except it’s with two teenagers on the Staten Island Ferry). I moved to New Jersey when I took a job at Fort Monmouth; I currently live in Toms River, NJ.

The Holmdel Theatre Company is located at 36 Crawfords Corner Road in Holmdel, New Jersey.  The company's play reading series is a forum where new works are given their first voice and established works are performed just for fun or sampled for possible inclusion in future seasons as main stage productions. Evenings consist of a play reading performance followed by a lively audience discussion.