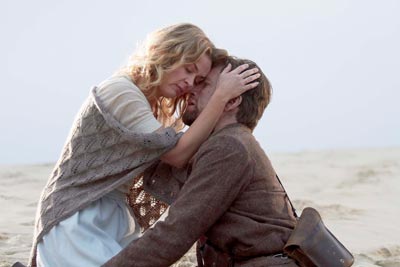 All the works that we are screening between September 6 through October 6 are part of the New Jersey Film Festival competition and were selected by a panel of judges including media professionals, journalists, students, and academics. These judges selected the 29 finalists which will be publicly screened at our Festival. The finalists were selected from over 388 works submitted by filmmakers from around the world. In addition, the judges will choose the Prize Winners in conjunction with the Festival Director. Prize winners will be announced after the screenings on Sunday, October 6, 2013.

Film Premieres:
Over 29 films will have their New Jersey or Area Premiere (Middlesex County) screenings as part of the New Jersey Film Festival Fall 2013. Some of these include: David Motrin's stunningly beautiful and deeply moving feature film from Canada entitled Mad Ship; John McKelvey's wonderfully crafted short documentary Rap ‘n' Reno which is about how two women's paths unexpectedly cross, over divides of culture, race, politics and music; Murv Seymour and Joe Bamford's Killer B3 -- a thrilling documentary that puts you inside the 425-pound instrument known as the Hammond Organ; José Asunción's documentary Sick Mick and the Boys features great storytelling, coupled with the magnetic personality of Mike Charlton and his jet-powered motorcycle; Emily Wick's Life with Alex - a compelling documentary film about non-human cognition and learning via an incredible African Grey Parrot; Angelique Papadelias's Foreign Eye in the Storm - a timely and moving feature documentary about Hurricane Sandy; Jeremy Waltman's Locomotive -an expertly acted and brilliantly moody independent feature film; Will McCord's Casual Encounters - a new independent feature about strangers who meet online and the messy truth of their off-line lives; Benjamin Ross Hayden's wild experimental film Agophobia about a future where technology reigns supreme; Ruy Verdiano's stunning experimental film Bebete and Daniboy hails from Brazil; Nicole Carsin's We Women Warriors follows three brave women from Columbia who fight injustice; Shaerif Sadek's From Queens to Cairo centers on an Egyptian-American who takes his family back to his native Cairo, one year after the Egyptian Revolution and many others.

For more information on these films go to our online site at www.njfilmfest.com.

Special Guest Appearances by Directors, Artists, and Actors:
This fall we are pleased to announce over 25 confirmed special guest appearances by film/video directors, artists, and actors to the New Jersey Film Festival Fall 2013! All short film visiting directors will introduce their work and all feature film visiting filmmakers will do a Question and Answer session after the screenings. For more information on these special guest appearances see the attached schedule or go to our online site at www.njfilmfest.com. Note: more filmmakers will be appearing but were not able to confirm their attendance at this time. So check our website for updated information.

Experimental Films Highlight Thursday evening screenings
Classic and rare experimental film screenings will take place on select Thursday evenings. Some of these include the surrealist masterpiece Dreams That Money Can Buy by Hans Richter, Man Ray, Marcel Duchamp, Max Ernst and others; a new 16mm print of Bruce Conner's short film Cosmic Ray; and films by Sidney Peterson, Bruce Baillie, Shirley Clarke, Hollis Frampton and many others. For more information on these special screenings see the attached schedule or go to our online site at www.njfilmfest.com.