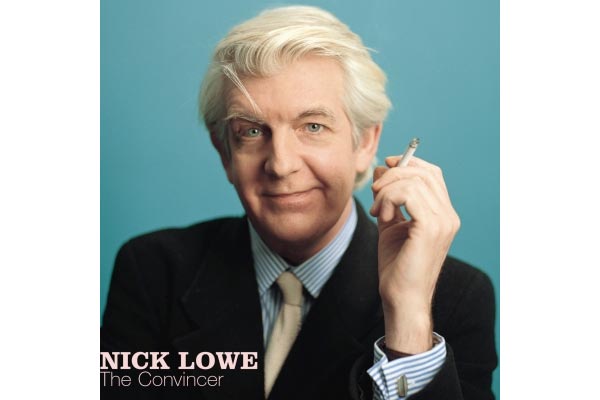 On September 17, 2021, Yep Roc Records will release an expanded 20th Anniversary Edition of Nick Lowe’s classic album The Convincer. Remastered from the original tapes, the album will be reissued as a blue vinyl LP, with accompanying blue vinyl 45 featuring three rarities from The Convincer era that have never before been released on vinyl or digital services, including covers of The Shirelles’ “Mama Said” and The Chi-Lites’ “There Will Never Be Any Peace (Until God Is Seated at the Conference Table),” plus the Lowe original “A Different Kind of Blue,” which Yep Roc has shared today.

Originally released on September 11, 2001, The Convincer earned immediate praise, with Mojo Magazine stating “Nick Lowe has made the album of his career.” In the intervening two decades, its stature has only grown among fans, critics and other songwriters. In his 2019 biography Cruel To Be Kind: The Life and Music of Nick Lowe, author Will Birch wrote that The Convincer is “the album that many still consider to be his best.” Nick’s labelmate Robyn Hitchcock has said The Convincer is “my favorite Yep Roc record,” adding “I love all his records, but this one stands out.” Johnny Marr, another avowed fan, enthuses “He sounds like Memphis via Chiswick...The Convincer is soul.”

Lowe was well into what The New York Times has called his “remarkable second wind” by 2001, having released two albums in the decade prior - The Impossible Bird (1994) and Dig My Mood (1998) - which were defined by songs set “in a lower yet more sophisticated key...crooned as if they were already standards” (Rolling Stone). But the characters populating The Convincer - the drifting day laborer who returns home in “Indian Queens;” the sad sack bachelor of Lowe’s eternal “Lately I’ve Let Things Slide” - were something altogether different: eccentric, funny, tragic, and so finely detailed as to resemble short stories.

In addition to the The Convincer 20th Anniversary Edition, Yep Roc has also announced new reissues of several other classic Nick Lowe titles, including the aforementioned The Impossible Bird, and Dig My Mood, plus a 10th Anniversary Edition of 2011’s The Old Magic, all of which were remastered from the original tapes. A new pink vinyl version of Lowe’s landmark 1979 album Labour of Lust will also be released. See below for a list of release dates and go HERE to pre-order.

Nick Lowe will return to the stage this fall, with a three night stand at Nell’s in London on October 3, 4 and 5. Stay tuned for information on 2021 US dates to be announced soon.

2. Only a Fool Breaks His Own Heart

5. Cupid Must Be Angry

7. Poor Side of Town

9. Between Dark and Dawn

13. There Will Never Be Any Peace (Until God Is Seated at the Conference Table)*