This emotionally charged story follows a young girl's memories of being raised by a community of strong African-American women during the civil rights-era South. Daughter is the main character, a 25-year-old narrator whose mother died when she was very young. She was raised by the women in the community, some blood related, some not, and at the age of 12, she began her journey to womanhood guided by these very diverse, non-traditional, older Black women. As she reflects, Daughter becomes a child again, reliving her vivid memories growing up, recalling the rituals, the faith healings, the stories she was told and the lessons she learned about survival, healing, faith and mystery. The production features actresses Cheryl Monden, Lorraine Stone and DaNeen Wyche. 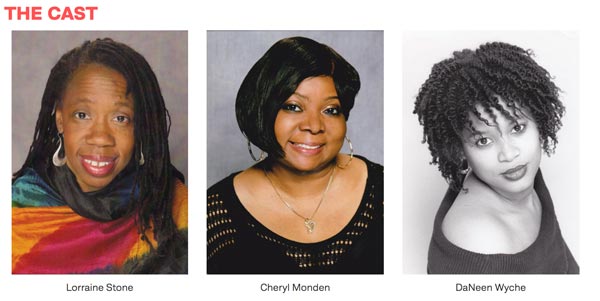 Show dates for Shakin’ the Mess Outta Misery are July 9-11 and July 16-18 with Friday and Saturday performances at 8:00pm and Sunday performances at 4:00pm. Ticket prices are $20 and are general admission. Purchase tickets online at middletownarts.org or call the MAC Box Office at 732.706.4100. The Middletown Arts Center is located at 36 Church Street in Middletown, NJ (next to the Middletown train station). Free parking is available onsite with additional free parking available in station metered lot weekday evenings after 6 p.m. and weekends.

The Middletown Arts Center (MAC) is an award-winning, state-of-the-art facility in Middletown, New Jersey that offers performances, exhibits, classes, demonstrations and camps centering on the arts. Its convenient location across from the Middletown train station on Church Street enables easy access and its expanded MAC Annex is minutes away at the Middletown Reformed Church’s Education Building. The MAC is operated by a non-profit 501c3, the Middletown Township Cultural and Arts Council which is dedicated to bringing quality arts programming and events to Middletown and surrounding communities.

Vivid Stage Presents Songs in the Garden On August 4th

Broadway at the Barn Presents Christina Bianco On September 18th