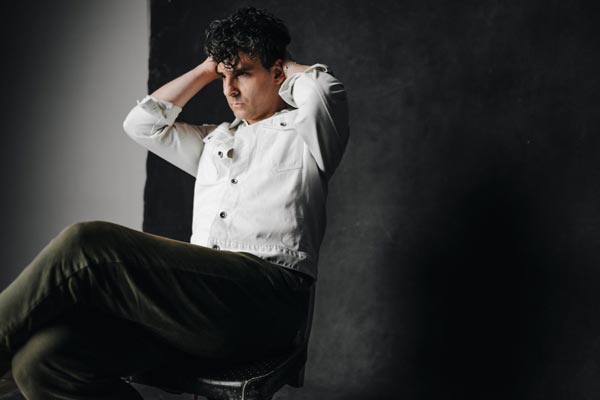 (JERSEY CITY, NJ) — White Eagle Hall presents Low Cut Connie on Friday, October 8 at 9:00pm. Tickets are $25. The band is touring in support of their double album, Private Lives, which was released in 2020.

“I don’t wanna talk about it,” says Low Cut Connie frontman Adam Weiner. “I just wanna do it. First take, right outta the box, hit record, just GO.  Everything with this record was a big mess, but that’s what I wanted it to be. I wanted this cinéma vérité approach with no filter and no script, just raw emotion in the voices of these characters. I wanted to capture real moments and make a kind of pure connection... straight to the heart.”

With Private Lives, Low Cut Connie’s wild  double-album, Weiner’s landed a direct hit. Exploring the schisms between our inward and outward-facing selves, the 17-track collection is as empathetic as it is ambitious, giving voice to the losers and loners and outcasts who live their lives beyond the spotlight, who toil in the wings without glory or credit. In what plays out like a series of short films, Weiner’s characters speak directly to the audience, delivering a sequence of candid, revealing monologues. The narrators here are dive bar patrons and late shift workers, single parents and starving artists, sex workers, gutter punks, and forgotten senior citizens. They’re ordinary folks just looking for escape and connection in a society that’s built on bad faith and broken promises. Rather than romanticize their struggles, though, Private Lives dignifies them, painting rich, nuanced portraits of the kind of modern American lives that all too often are ignored or misunderstood.

“I see more clearly now than ever before what my calling is,” explains Weiner. “I’m here to write and sing for the underdogs, for everybody who’s not part of that shiny, sexy 1%. Maybe they’ve been rejected by society, maybe they’ve isolated themselves on purpose. Maybe they stopped trying, or maybe they’re just bored with it all. Whatever the case, they’re my people.”

Alternating between raucous, full-tilt, rock and roll ecstasy and gritty, stripped-down vulnerability, the record is Low Cut Connie’s most potent and wide-ranging work to date, a complicated, sprawling epic. It’s at once beautiful and sloppy, brilliant and sordid, pissed off and joyous. While Weiner might not call it a concept album, there is an underlying architecture at play here. The record’s vacillations between riotous, anarchic anthems and raw, painfully honest solo performances underscore the lyrical shifts between its expressions of the public and private self. What do we show the world when we step out on the street? Who are we really in our most personal spaces?

“I’m obsessed with understanding people’s interior lives,” says Weiner. “In order to explore that idea, I had to create a flow that went in and out of these characters’ private spheres. There had to be a push and pull between their external and internal worlds. I knew if I was going to pull that off, I was going to have to do a really big album.”

Artistic triumphs rarely come without a price, though, and Private Lives is no exception. In the three years Weiner spent writing and recording the collection, he weathered what was perhaps the most tumultuous stretch of his life, rearranging the band’s lineup multiple times, facing down a harrowing mental health crisis and multiple injuries, and reimagining just what Low cut Connie was. Nearly thirty different musicians appear on ‘Private Lives,’ and Weiner produced the entire record himself, capturing performances raw and loose in studios across the country during a time in which he was spending more than 200 days a year on the road. If that sounds like a chaotic way to make an album, that’s because, quite frankly, it was, and the music is refreshingly impulsive and unpolished as a result.

“I was making a big fucking mess,” reflects Weiner. “I just leaned into it.”

Hailed as “pathologically fun” by The New York Times, Low Cut Connie first exploded out of Philadelphia roughly a decade ago with their self-released debut, Get Out The Lotion. Crossing the rapturous energy of Jerry Lee Lewis with the flamboyant sleaze of the New York Dolls, the record earned immediate critical raves, with Rolling Stone describing it as “what indie rock might sound like were it invented in Alabama in the late fifties” and NPR's Fresh Air praising it as “both a throwback to early rock and a vital collection of raucous new music.” A year later, they followed it up with ‘Call Me Sylvia,” which the NY Daily News called “Mott the Hoople-style honky-tonk with a hint of garage-punk spunk,” and in early 2015, they returned again with ‘Hi Honey,’ an album dubbed “the essence of what rock ‘n’ roll should be” by Sound Opinions host and legendary rock critic Greg Kot. Despite all the glowing press, Low Cut Connie still remained something of an underground phenomenon, continuing to build up their cult audience one sweaty show and glorious festival at a time. That all changed in the summer of 2015, though, when a very unexpected co-sign arrived from 1600 Pennsylvania Avenue.

“We got word that Barack Obama had put us on his summer playlist,” says Weiner, who was later invited to visit the White House. “Suddenly this vehicle that had been going 40mph lurched forward to 90mph, and that’s when things really took off.”

Soon the band was counting the likes of Elton John and Bruce Springsteen among their fans as they sold out increasingly larger and larger rooms around the country. "Everybody's in this sweaty mass," NPR's Ann Powers said of her first experience at a Low Cut Connie show. "Everybody's dancing, everybody's connecting. It's just the joy and sensuality of the rhythm and the music. To me, that's the essence of rock and roll." With more eyes on them than ever before, the band delivered big in 2017 and 2018, releasing a pair of critically lauded albums—Dirty Pictures (Part 1) and Dirty Pictures (Part 2)—and by the time 2019 came to an end, they were sitting pretty on Rolling Stone's Best of the Decade list.

“As all these amazing things were happening, there was also this unraveling,” explains Weiner. “There was a lot of drama and chaos going on behind the scenes, and it led to a psychological breakdown where it felt like I lost about six months of my life. The record kept getting better and better, though, so I just kept pressing ahead.”

Through it all, Weiner clung to music as a lifeline, refusing to cancel a single show and redoubling his commitment to honesty and sincerity in every aspect of his career. Rather than demoing and pre-producing new song ideas as he had in the past, he began heading straight into the studio whenever inspiration struck (sometimes even setting up microphones in hotel rooms and Airbnb’s) in an effort to capture the music in its purest form. This “grab-and-go” approach, which saw Weiner carrying around tapes and hard drives full of recordings everywhere he went, was a technical nightmare, but it proved to be essential to capturing the spontaneous spirit of Private Lives.

“I was playing a lot of guitar on the songs,” explains Weiner. “I don’t really know how to play guitar, so that felt like getting back to this childlike approach. Or sometimes I would do these sessions by myself where I’d sit at the piano and say, ‘Just roll me,’” he adds, crediting longtime guitarist Will Donnelly and engineers Adam Hill, Zach Goldstein, and David Chale with keeping the whole thing cohesive. “I’d just start singing and the first take out of my mouth would become the song.”

While the record is indeed built around the magnetism of Weiner’s electrifying delivery (he considers the album to mark the transition of Low Cut Connie from a group project to solo vehicle), it’s still very much a communal effort, one that infuses old school rock energy with streaks of R&B, doo-wop, soul, and punk. That much is obvious from the swaggering title track, which opens the album with a look at the vitality and humanity of subcultures that come to life behind closed doors. Like much of the album, it’s an ode to the odd and the eccentric, to the alienated and the broken, and it prioritizes community above all else. The jittery “Help Me,” for instance, is a plea for understanding at a time when compassion is running in short supply, while the searing “Look What They Did” grapples with the devastation left behind after the predatory corruption of Donald Trump and his associates ravaged Atlantic City, and the soulful “Wild Ride” celebrates the power of art and human connection to transcend the pain and sadness of our physical circumstances.

“Like our live shows, I wanted this album to be both dark and cathartic,” explains Weiner. “We get called a party band a lot because people come to our concerts and dance and feel great, but I think there’s more than meets the eye there. People feel free and joyful at our shows because we acknowledge who they are and their struggles and we sing about what’s really going on in their lives. There’s a collective release when we all get weird together. It’s a liberation.”