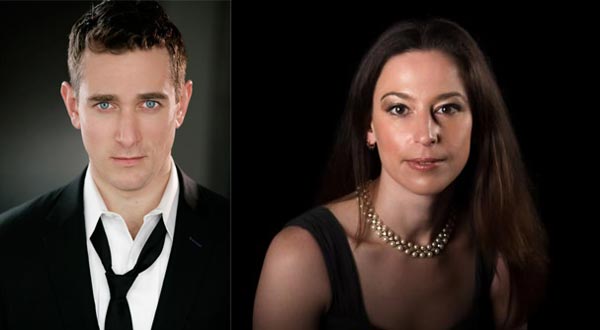 (BRANCHBURG, NJ) -- The Raritan Valley Community College (RVCC) Arts & Design department will present “Petersburg,” a concert featuring baritone Christopher Dylan Herbert and pianist Anna Keiserman, Sunday, September 26 at 2:00pm. The event, which is open to the public, will be held in the Welpe Theatre at RVCC’s Branchburg campus and also will be streamed live on Facebook. Masks are required in all RVCC facilities and social distancing will be followed.

The concert will feature works by Maurice Ravel, Pyotr Tchaikovsky, and rarely performed composers Georgi Sviridov and Marion Bauer. The center piece of the program is “Petersburg,” a cycle by Georgi Sviridov with text by Russian poet Alexandr Blok. The cycle reflects the traumatic state of mind and soul that permeated Russian society in the “Silver Age” of Russian arts and letters preceding World War I.

The performance is part of the department’s MOZAIKA Concert Series, launched in fall 2020 to help defray the cost of private instructional lessons for RVCC music majors. The series is designed to promote multicultural dialogue through the performance of music from the classical canon through the 21st Century.

Christopher Dylan Herbert is a musicologist and baritone who performs frequently throughout the Americas, Europe, and Asia. The two-time GRAMMY® nominee has soloed with The San Francisco Symphony, Boston Symphony, and Chamber Music Society of Lincoln Center and also has performed with the International Contemporary Ensemble and the Choir of Trinity Wall Street. He frequently develops new opera and concert works, including commissions by Hannah Lash, Gregory Spears, Laura Kaminsky, and Ellen Reid. He heads the voice program at William Paterson University and was the baritone in the critically acclaimed ensemble, New York Polyphony, from 2010 to 2020.

Russian-born and New York-based pianist Anna Keiserman is known for her creative programming, expressive freedom, and singular vision. As a soloist Keiserman has performed concerti by Rachmaninoff, Haydn, Beethoven, and Arensky with the Volgograd Symphony Orchestra, and also toured through Italy, Spain, and Russia. Among Dr. Keiserman’s awards are top prizes in international piano competitions in Russia, as well as second place in the 2019 American Prize Competition. Keiserman has served as faculty at the NYU Steinhardt School of the Arts, at the Rutgers University Extension Division, and at William Paterson University. In September 2020 she joined the Raritan Valley Community College faculty as an Assistant Professor of Piano.

​A post-performance discussion with the artists will follow the program. The concerts in the MOZAIKA Concert Series are free of charge, but donations are accepted and will go to the RVCC Applied Music Fund to help the College’s music majors pay for private lessons on their primary instruments.

The concert also will be available for viewing online after the initial performance date. For additional information about the upcoming season, click here.

The MOZAIKA Concert Series is made possible by funds from the Somerset County Cultural & Heritage Commission, a partner of the New Jersey State Council on the Arts.